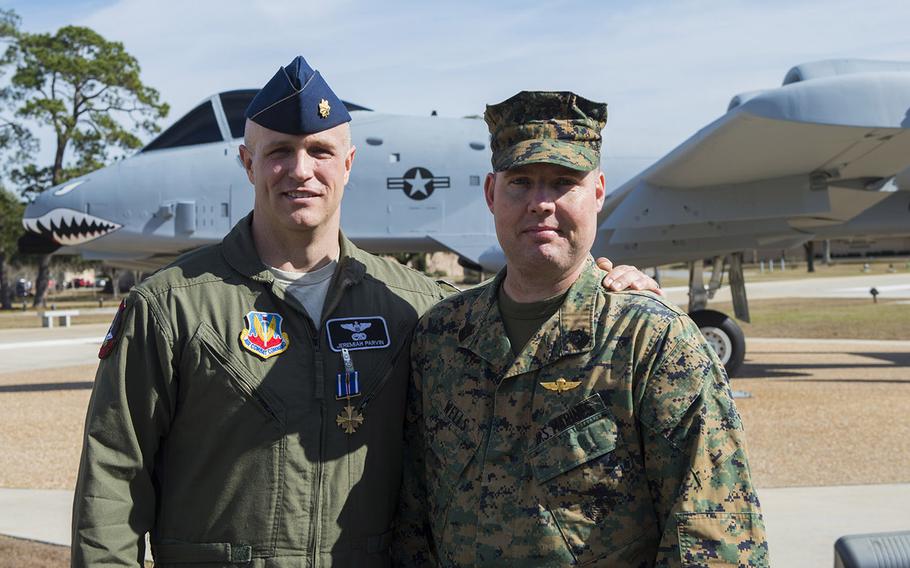 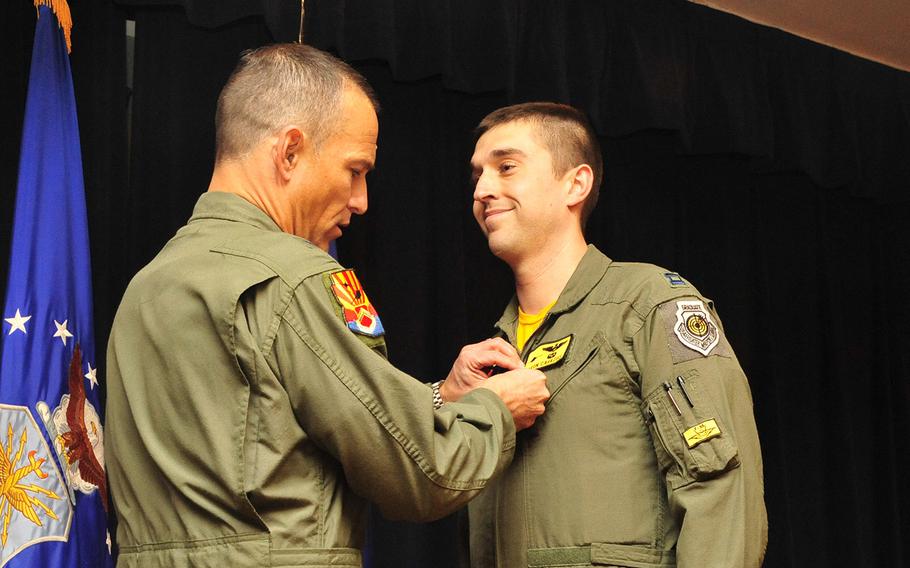 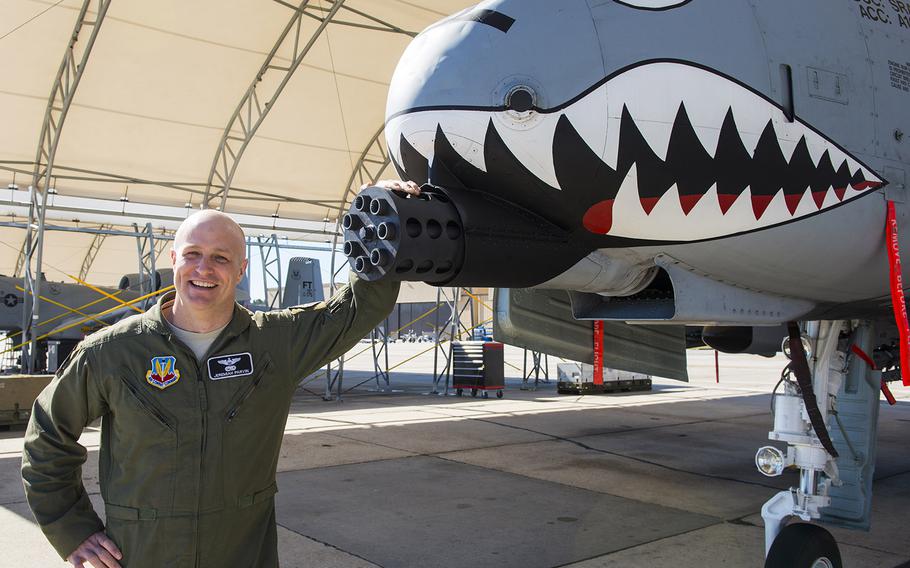 U.S. Air Force Maj. Jeremiah "Bull" Parvin, 75th Fighter Squadron director of operations, poses for a photo in front of his A-10C Thunderbolt II Jan. 28, 2015, at Moody Air Force Base, Ga. Parvin was awarded the Distinguished Flying Cross with Valor Jan. 29,2015, for his selfless and heroic actions that he displayed seven years earlier during a deployment to Afghanistan. (Ceaira Tinsley/U.S. Air Force) 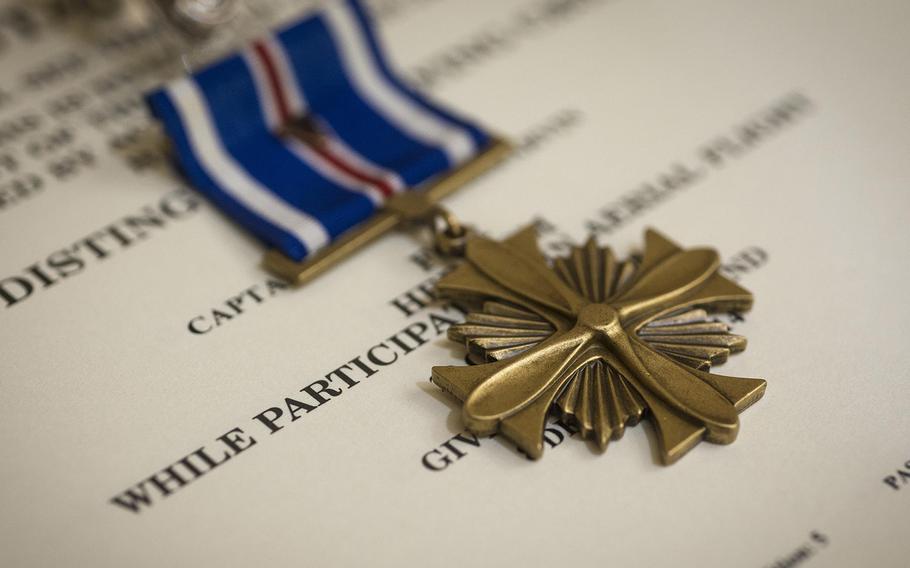 A Distinguished Flying Cross sits on display prior to being awarded to Maj. Jeremiah Parvin Jan. 29, 2015, at Moody Air Force Base, Ga. The DFC is awarded for heroism or extraordinary achievement while participating in an aerial flight. Parvin is a 75th Fighter Squadron A-10C Thunderbolt II pilot. (Ryan Callaghan/U.S. Air Force) 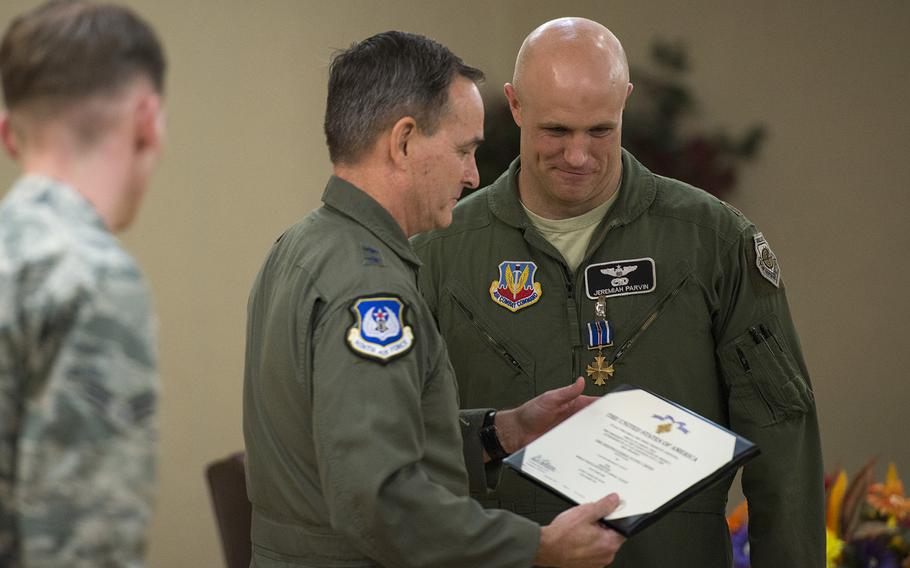 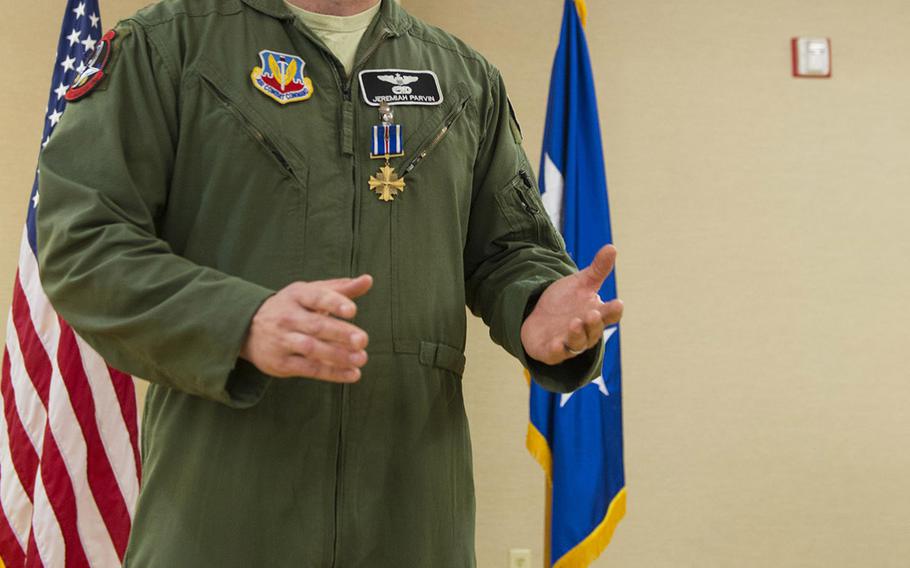 The view from the A-10 cockpits was troubling — low cloud cover and uncertain terrain below.

The view from the ground was just plain grim.

A team of Marine commandos were trapped inside a compound in the mountains of northwest Afghanistan, surrounded by enemy fighters and in desperate need of air support to cover an escape.

What happened next would burnish this 2008 episode into Marine lore. The team battled its way out of the compound, fighting in close quarters while backed by the 30mm strafing runs of a pair of A-10 Warthogs.

Many of the team members would be recognized soon afterward for their roles in the escape. But it was only in January that the Air Force recognized the two A-10 pilots, Maj. Jeremiah “Bull” Parvin and Capt. Aaron Cavazos, awarding both the Distinguished Flying Cross with “V” device for valor during a ceremony at Moody Air Force Base, Ga.

“It was an emotional day for all of us,” recalled Master Gunnery Sgt. Richard Wells, a Marine NCO on the ground that day who would later push for the medals for Parvin and Cavazos.

The two pilots, stationed at Bagram Air Base in eastern Afghanistan, were refueling in air near the base when the call came through on Oct. 28, 2008, of a firefight involving Marines in Badghis province, some 320 miles to the northwest.

It was an unusually distant request. But the Marine Special Operations team was in an unusual situation. Deployed to a remote firebase, the unit had no dedicated air support or nearby backup force. It had been ambushed from a riverbed while making a routine patrol near the firebase and had split into two sections, one of which sheltered in a nearby compound and was taking intense fire from militants.

This was Wells’ section, which was falling back from room to room as the compound walls crumbled under heavy fire. They ended up in a last room — six Marines, an interpreter and an Afghan soldier — with militants directly outside, sticking muzzles through open cracks, he recalled. The Marine captain was shot in the arm. The corpsman who went to treat him was hit in the helmet.

“I’d say that at that point we knew it was just a matter of minutes before we were completely overran,” Wells said.

The A-10 pilots faced their own problems as they neared the firefight. The weather was overcast, placing several cloud layers dangerously close to the ground. The terrain was mountainous. The sun was setting. And both pilots lacked detailed maps of the area, which was well outside their normal ones.

They leaned on the maps they had, their radar altimeters and the coaching of the on-scene joint terminal air controller, an airman on the ground coordinating between the Marine team and the A-10s.

Parvin was the first to make it below the cloud cover, finding an intense scene — tracer fire from multiple directions, much of it high-caliber, and a burning compound. He turned on his exterior lights, drawing the attention of the fighter — and some of their fire.

Wells’ team had just broken out of the building, tossing hand grenades and firing on full automatic mode. They had charged through its courtyard and to the compound wall when Wells saw the A-10 lights.

“I looked up and saw this bright light, which seemed very odd to me,” Wells said. “I’ve never seen planes flying like that.”

The air controller guided Parvin and Cavazos toward the burning building, painted targets with an infrared laser and had the Marines hit their strobes for identification.

The pilots then began their strafing runs, hitting the building with white phosphorus rockets and their 30mm cannons. They targeted fighters near the building, coming within several dozen meters of the Marine team, a dangerously close range even for an A-10.

For Wells and his team, it was critical breathing space. Exhausted, wounded and running out of ammunition, they had still been in danger despite making it outside the building.

“As beat up as we were when we made it to the wall, if those A-10s didn’t come in like that I’m sure we wouldn’t have made it very far beyond that wall,” he said.

With Parvin and Cavazos on scene, the team rejoined the other section and returned to their firebase. Incredibly, there were no deaths or serious injuries.

The pilots would remain over the area for several hours before heading back to Bagram. Less than a year later, the Marine team contacted Cavazos and sent the pilots a pair of plaques as thanks.

As the years passed and team members were recognized individually — one was awarded the Silver Star — they wondered whether the pilots had been appropriately honored. They contacted Parvin’s squadron, the 75th Fighter, and put the awards paperwork in motion.

The payoff arrived Jan. 29. Wells attended the ceremony as Parvin and Cavazos received the Distinguished Flying Cross with “V.” “I know the rest of my team would’ve loved to be there,” he said.

Parvin said he never realized the intensity of the firefight until he heard the story from Wells. The award, he said, is an honor.

“It’s awesome to be recognized,” he said.