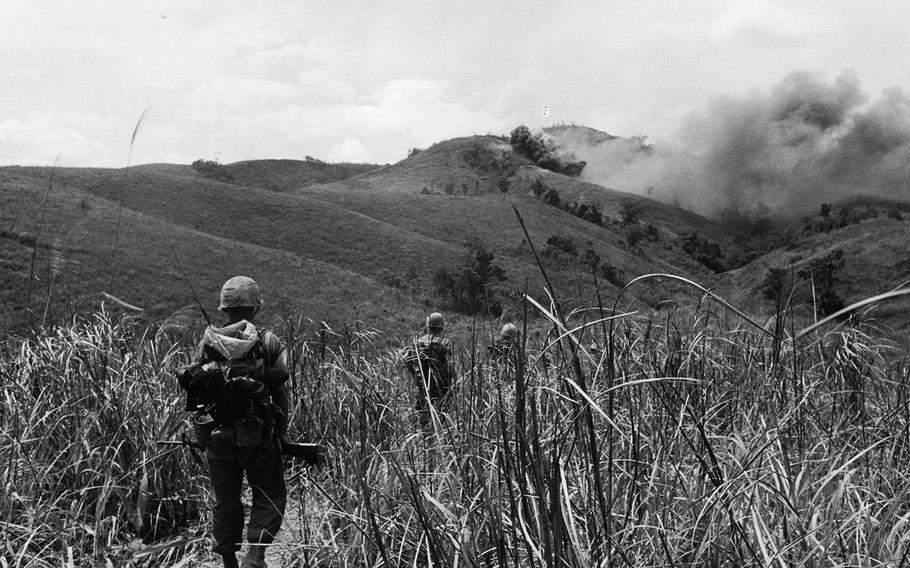 DA NANG, Vietnam — “They acted like they were doped up. They just kept right on coming at us even after they were hit,” the Marine said.

Staff Sgt. Larry R. Moon was recalling a battle in which he and 14 other Marines held off a reinforced company of North Vietnamese regulars. The 15 men from D Co., 1st Bn. 9th Marines, were riding in two small tracked vehicles when they were ambushed about six miles northwest of Hue.

“We only had 15 men in the Otters when they hit us with command detonated mines and knocked out the lead vehicle. Then they opened up on us with small arms, automatic weapons, grenades and mortars,” the 27-year-old Marine said.

The small Marine force continued to fight off the heavily armed enemy as they desperately fought for their lives. Moon was wounded in the head when machine gun fire cut off the top of his helmet.

“It was full of holes, but I think it was the mortar round that went off right beside the Otter that wounded me,” he said. “The concussion blew me down inside the vehicle.”

Help finally reached the stricken Marines after more than 30 minutes when a platoon from C Co., was sent to the ambush site.

“We didn't realize how bad the situation was up there — hell, we just thought we were going to help evacuate the wounded,” Lance Cpl. John J. Collins, a fire team leader, said.

Collins and the platoon were in for a surprise.

When the platoon moved up they started a sweep of a nearby village and wood line.

“We were just about 20 yards into the village when they opened up on us. We hit the deck and started firing back,” Collins said. But the battle had only begun.

The Communists tried to overrun the outnumbered Marine platoon, hurling hand grenades and struggling with the Marines in hand-to-hand fights.

“They were everywhere,” Collins said. “One of our men (Lanes Cpl. James Stogner) killed three with his bayonet and shot another three at close range before he was wounded by a hand grenade.”

Collins himself was wounded when he lost his helmet during the fierce fighting. Shrapnel from a hand grenade creased the top of his head.

After about three hours of close fighting the enemy withdrew, leaving behind 12 of their dead. Four Marines died and and other 20 were wounded.