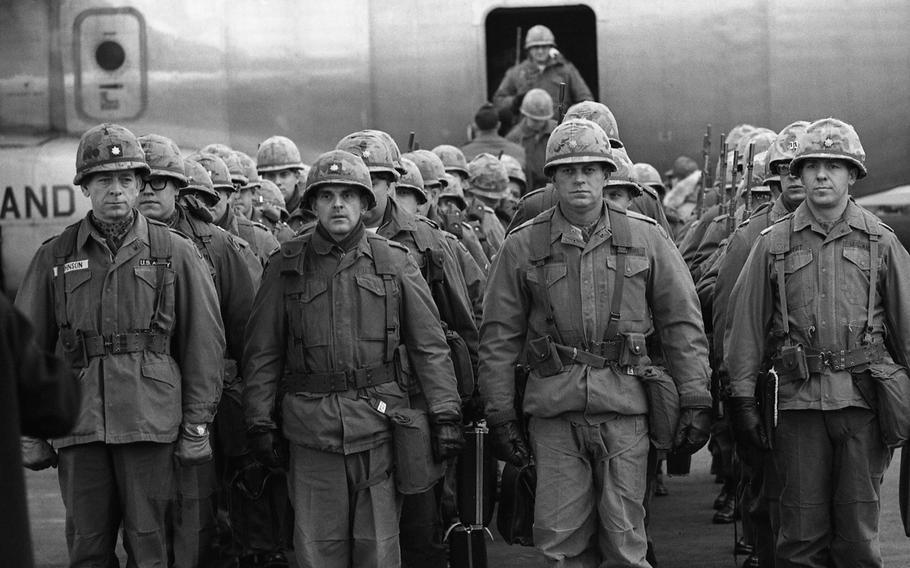 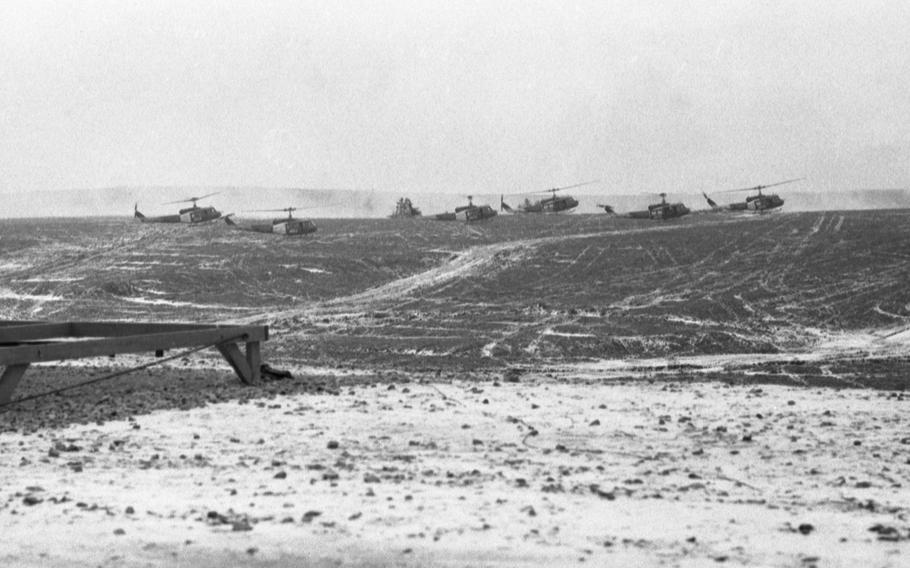 Buy Photo
The air-mobile warfare demonstration at Grafenwoehr, Germany, part of the Reforger I exercise, Feb. 1, 1969. (Jim Cole/Stars and Stripes) 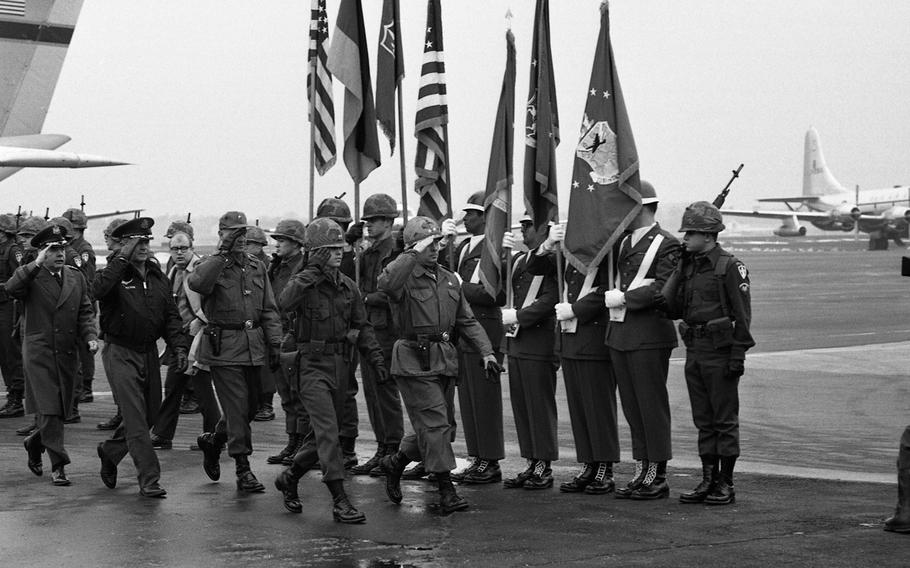 Buy Photo
Ceremony for the arrival of the Reforger I advance party at Rhein-Main Air Base, Germany, Jan. 6, 1969. (Ted Rohde/Stars and Stripes) 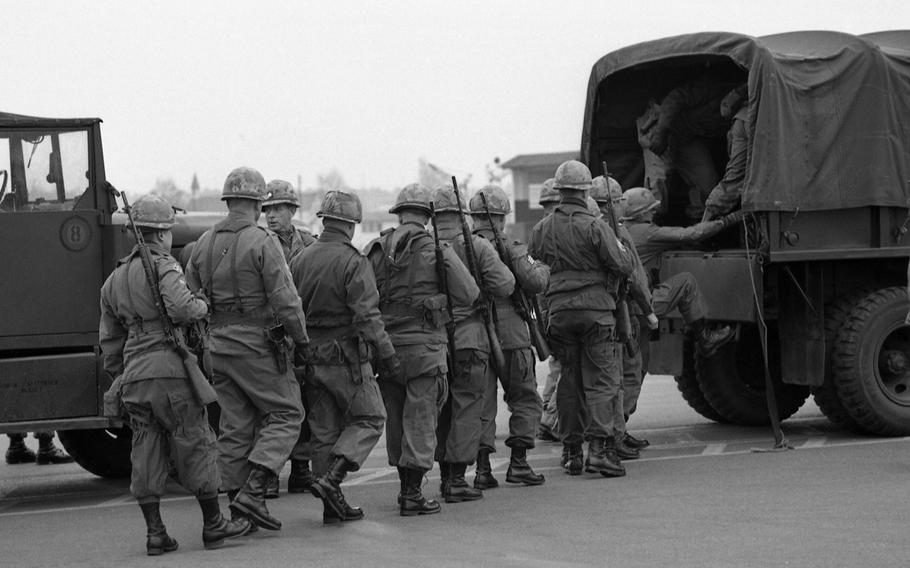 WORMS, Germany — Planning and controlling the movement of troops and equipment in the Reforger I maneuver is like putting together a giant jigsaw puzzle while keeping track of every single piece.

This in essence is the task given to the Army's Communications Zone, Europe (Com Z), which is coordinating and super- vising just about everything but the actual field training exerises for the 12,500 Army troops from the moment they arrive in Germany until their departure.

The nerve center for Com Z's complex Reforger operations is at the command headquarters at Taukkunen Casern here, and the man who supervises these operations is Brig. Gen. Joseph W. Pezdirtz, deputy CG for area sup-port.

"Every major element of Com Z plays a big part in Reforger I — the support districts, the depots, the newly-formed Transportation Command, everybody," said Pezdirtz in a briefing.

The general said there have been some misconceptions and misinformation about the purpose of Reforger I. "It is not intended to be a speed contest," he said. "Rather it permits us to have a close look at our procedures to see if there's a better way of doing things, of simplifying operations. 'Good Enough Pace' "It sets a good enough pace to make us work hard, but it also gives us enough time to check for errors and decide on improvements."

Com Z's basic mission in Reforger I is to receive the troops, move them into the designated "prepositioned" sites, arrange for their billeting, draw their equipment and get them to the Seventh Army Training Center at Grafenwoehr by road and rail.

The reverse process applies once the field training exercises are over and the troops are returning to their home bases in the States. Com Z's welcoming committee, as it were, is the Array Reception Group Europe (USARGE) which operates processing detachments at Rhein-Main Air Base and Nurnberg airport as the troops come and go.

USARGE also arranges transportation, messing, billeting and other support services at strategic sites, including the three pre- position storage areas at Mann- holm, Karlsruhe and Kaiserslautern. Equipment issue at the storage areas, Pezdirtz explained, Is the responsibility of the USAREUR Augmentation Readiness Group (UARG) Which was transferred from the Seventh Army to Com Z in 1965 and shares existing Com Z depot sites.

This equipment includes approximately 2,600 wheeled vehicles which will have to be moved in convoys from the storage areas to the training center in northeastern Bavaria, plus 1,000 tracked vehicles, which will travel by rail. To coordinate, the functions of all Com Z elements involved — as well an a number of supporting commands such as StratCom Europe, the Seventh Army Support Command, the Medical Command, the 15th MP Brigade and others — a control center has been set up at Com Z headquarters here.

Headed by Col. Charles R. Blaha, its staff practically keeps track of every man and every piece of equipment deployed in Reforger I in Germany from start to finish.

Convoy travel will be mostly via the Karlsruhe-Frankfurt- Nurnberg autobahn, the colonel said, and four so-called convoy control centers have boon set up along the 280-mile route at Lorch, Weiskirchen, Kitzingen and Tennenlohe.

"But there is also a major southern route available, as well as a number of alternate roads in critical areas, in the event of emergencies due to weather, accidents or whatever," Blaha said. Troop and equipment movements are scheduled and supervised by the Movement Control Center headed by Lt. Col. Richard F. Johnson of the Transportation Movement Control Agency.

Johnson and his men have drawn up intricate time tables and schedules to assure a steady flow of troops and equipment by road and rail to and from Grafenwoehr. A transportation officer for the West German Bundeswchr, Maj. Werner Neidlinger, from the Area Command IV in Mainz, is acting as one the liaison officers to German authorities during Reforger I operations.