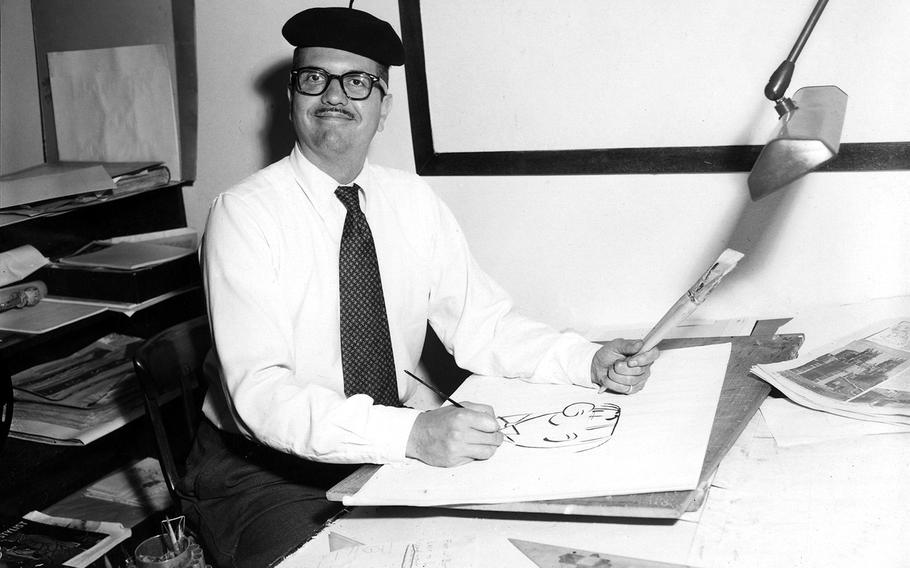 Buy Photo
Dick Wingert, creator of the Hubert cartoon, sketches his favorite character. Dick, who is touring Europe with his wife Lee and two daughters, began drawing Hubert in 1942, when he was a member of the London edition of Stars and Stripes. (Gene Bane/Stars and Stripes)

Dick Wingert went to art school to become an illustrator. The Army turned him into a cartoonist.

He graduated in 1940 and was inducted into the Army in February 1941. After spending a year in Louisiana with the 34th Infantry Division he was sent to Ireland. Wingert was drawing cartoons and submitted samples to the newly re-established Stars and Stripes, which had ceased publication after World War I.

After several were printed, Wingert requested a transfer to Stars and Stripes and was moved to London. He spent the rest of the war there and created his main character Hubert — an unshaven, disheveled GI popular with deployed readers. Hubert started as an illustration and later became a single-panel cartoon.

Hubert, Wingert said, was "a poor clunk caught in a war he didn't understand. He was frustrated, baffled and bewildered at every turn by Army life."

That idea found an appreciative audience. "There is no end of material," Wingert once said, "and all you have to do is make a humorous comment on how you personally feel about any given situation of Army life and you have a million other guys who feel the same way you do."

Wingert went briefly to the front with Gen. George C. Patton's Third Army in search of inspiration. But he said he did not find it useful. "It wasn't very funny," he said.

The Iowa-born Wingert settled in Connecticut after the war, and made a deal in 1945 with King Features to syndicate his comic to newspapers across the country. Hubert evolved from a baffled GI to a baffled husband who was oppressed by his sexy wife and abused by mother-in-law. The comic strip was printed for decades.

Wingert died in 1993. His cartoon collection is archived at Syracuse University.