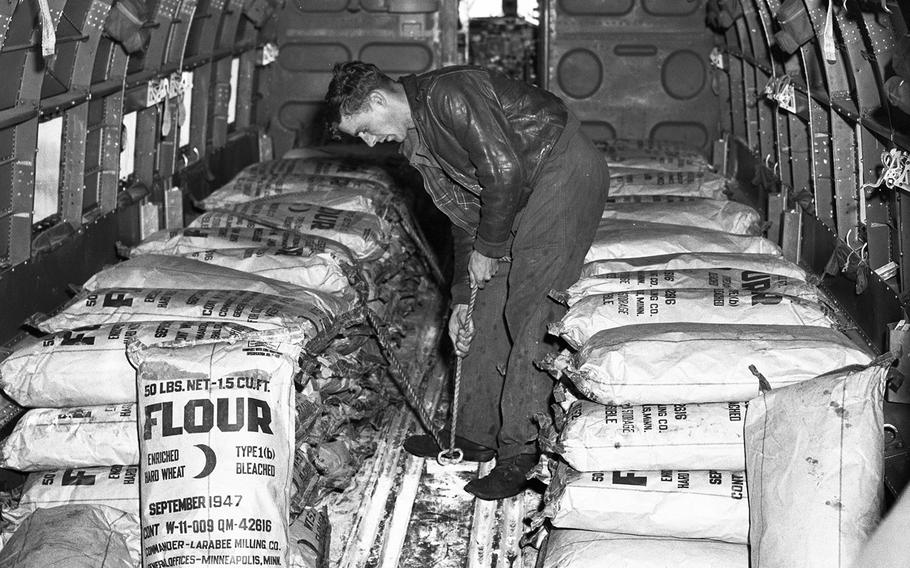 Buy Photo
Frankfurt, Germany, June, 1948: A worker at the Rhein-Main airport secures sacks of flour loaded onto a plane for shipment to blockaded Berlin during the first week of the Berlin airlift. (Gerald Waller/Stars and Stripes)

Buy Photo
Frankfurt, Germany, June, 1948: A worker at the Rhein-Main airport secures sacks of flour loaded onto a plane for shipment to blockaded Berlin during the first week of the Berlin airlift. (Gerald Waller/Stars and Stripes) 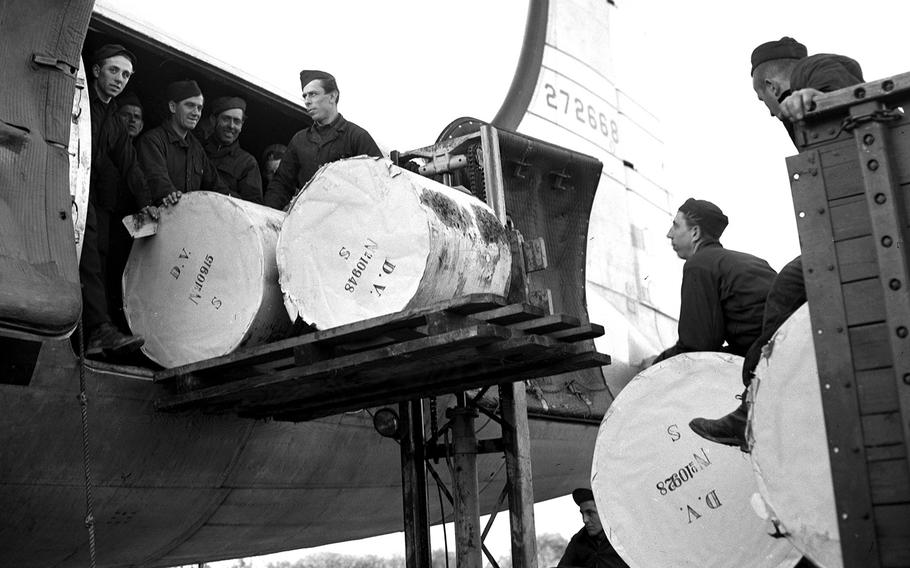 Buy Photo
Wiesbaden, Germany, October, 1948: Rolls of newsprint are loaded on an airlift transport plane, bound for Berlin. One hundred tons of paper were being flown to the blockaded city by the Air Force every week, as allocated by Gen. Lucius Clay, to allow newspapers of the three Western sectors to combat the Soviet-controlled Berlin press. (Stars and Stripes)

BERLIN — The first large-scale American armada carrying food for Berlin today assured the city it would not starve despite a Soviet land blockade.

More than 100 American cargo planes arrived at Tempelhof Airfield today and even larger forces will arrive in the future, it was learned, laden with food for the Western sectors’ 3,500,000 people

American officials, who in the past said it would be impossible to feed Berlin by air, today reversed themselves and said it could be done. Their confidence was buoyed by Washington’s promise to come to the aid of besieged Berlin with Army cargo ships gathered from all over the world. Thirty-five C54s already are on their way to Germany to supplement the fleet of C47s now being used.

Land in RainIn addition, the British will introduce an “extensive” air lift to meet the threat to force the Western Allies to abandon Berlin to save the city from hunger.

Despite a driving rain, cargo craft landed at Tempelhof today guided by instruments at the rate of one every eight minutes.

Officials here said there is no reason why planes cannot land even during darkness and they indicated the present number of flights would be stepped up.

Wit the food supply assured, only the problem of bringing in coal faced the Allies and Germans. Normally Western Berlin used 2,000 tons of coal daily but officials sad 50 tons to provide power for the water and sewage system was about the only absolute necessity. “It would not be impossible to bring coal in by air,” one official said.

No details of British plans to supply Germans by air have been announced but it was said the British air loft would be “extensive.”

Ten barges, each carrying 100 tons of food, arrived in Berlin from West Germany yesterday. Russia has not yet forbidden barge shipments but even so Allied officials could not explain why Russia let the barges through the blockade.

The Deutsche mark – supposedly the cause of the blockade – continued to be sought by Berliners who paid 20 or more Russian-issued marks for it.

About 96 percent of residents of the Western sectors have exchanged their money for Western marks an indication of confidence in it as well as defiance of Soviet threats.

At the Karlshorst Race Track this morning in the Soviet Sector, six persons were injured in a rush to exchange old marks for Eastern marks. Berliners may exchange their money for both marks.