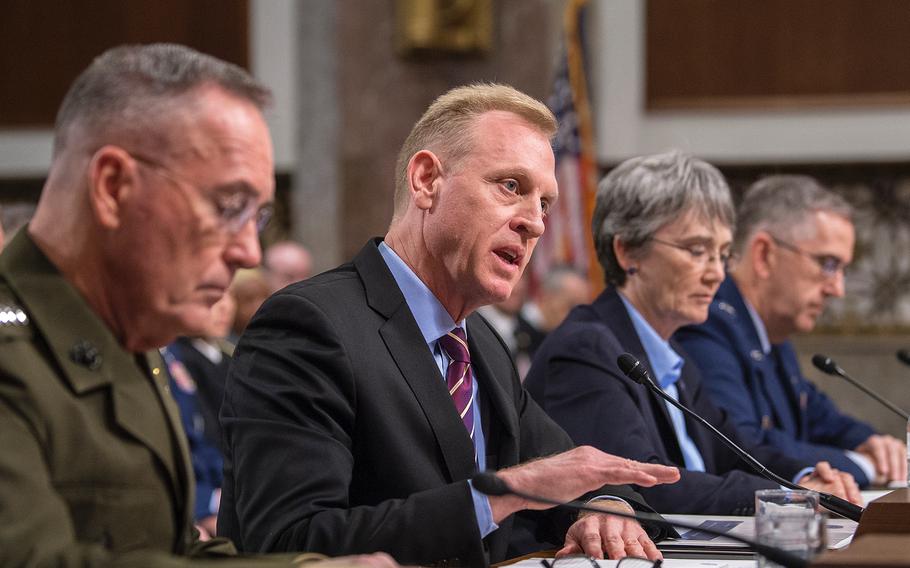 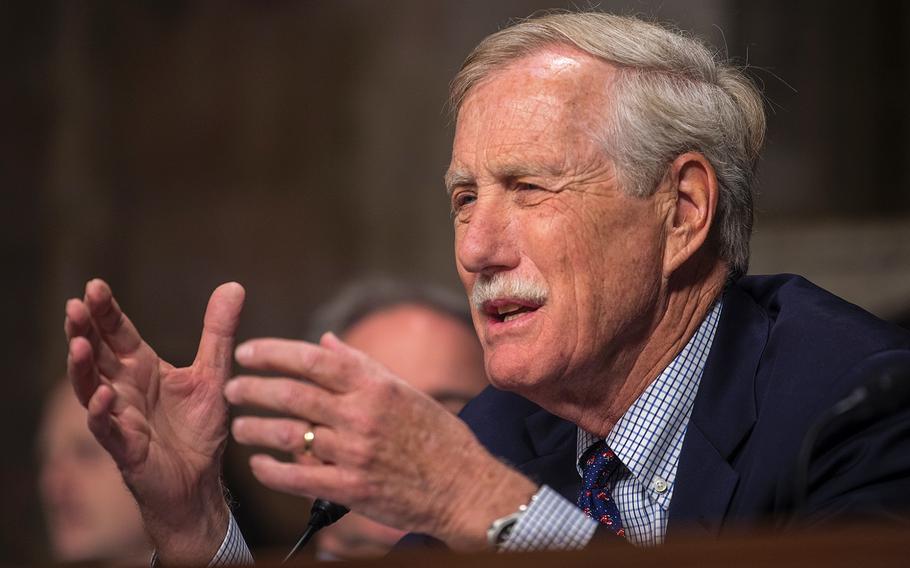 Buy Photo
Sen. Angus King, D-Maine, asks a question during a Senate Armed Services Committee hearing on Capitol Hill in Washington on Thursday, April 11, 2019. King expressed qualms he has about "a new bureaucracy that is going to cost us half-a-billion dollars a year," he said in reference to plans to create a new Space Force command. (Carlos Bongioanni/Stars and Stripes)

WASHINGTON — A Senate panel on Thursday raised a long list of reservations to a Trump administration plan to create Space Force as a new military branch that could require $500 million in annual funding.

In their first hearing on the proposal, the Senate Armed Services Committee met top Pentagon officials with skepticism and concerns that a Space Force will result in a new, costly layer of military bureaucracy.

Some Senate committee members suggested a unified command rather than a separate military branch could be a better way to improve national space security.

“I don’t understand how putting a new box in an organizational chart is going to help us to respond to the new challenge that we face,” Sen. Angus King, I-Maine, told top military officials. “I think Space Command makes sense… but to create a new bureaucracy that is going to cost us half-a-billion dollars a year, I’ve got to be convinced that there’s going to be some incremental value there.”

“We are all open minded on the plan, but are wrestling with different aspects of it,” said Sen. Jim Inhofe, R-Okla., chairman of Senate Armed Services Committee. “This is one of those rare times where we are having a hearing where people haven’t made up their minds.”

Rhode Island Sen. Jack Reed, the committee’s ranking Democrat, said Congress hasn’t created a new military branch in 70 years and it’s a decision that should not be taken lightly.

“How do we avoid that and why didn’t we think harder about coming with a leaner structure?” Reed asked.

Committee members also expressed concerns that a Space Force will drain the Air Force and its culture is too similar. They also shared reservations about a four-star general overseeing the new service and competing with the needs of the Air Force.

“I am airman at heart, when I bleed, I bleed blue. I love my Air Force and I love the history of the Air Force and space,” Hyten told the Senate committee. “But every physical domain we have, when it becomes contested, we create a military service to deal with that. So, we’re going to have a Space Force one day. I think what the committee has to decide is when that is going to happen.”

In 2017, a House proposal to create a “Space Corps” as a sub-unified command was met with fervent opposition from the Pentagon’s then-leadership and their Senate colleagues. However, President Donald Trump then upped the proposal last March, suggesting the military should create a new branch instead called Space Force as a result, giving the move new momentum.

“I appreciate the president putting this idea forward. You can tell that we’re all wrestling with it, we’re struggling with it,” Sen. Dan Sullivan, R-Alaska, told the military officials. “It’s pretty clear that watching some of your evolutions, that you’ve struggled with it as well.”

For example, Wilson, who leaves her Air Force job next month to become the next president of the University of Texas at El Paso, was vocal about her opposition before reversing her stance last year.

Sen. Gary Peters, D-Mich., quoted Wilson saying in 2017 after a Senate hearing that the Pentagon was already complicated enough without a space command, it would just add a new organizational box and new funds should be spent on lethality, not bureaucracy. Peters said money can’t continue to be thrown away on such military initiatives, and he’d rather see Pentagon officials offer plans to spend more efficiently.

Sen. Joe Manchin, D-W.Va., also expressed confusion over the move even after previous conversations with Shanahan on the reasoning for a Space Force.

“I’m having a real hard time understanding why we need this other agency,” Manchin said. “You’ve got everything at your disposal right now …this doesn’t make any sense to me at all.”

However, Wilson, Shanahan, Dunford and Hyten remained steadfast in their support of the president’s plan for a new service.

“The amount of change that is taking place in this environment, we’re not prepared to address… the way we are set up now,” Shanahan told Manchin. “This is a fundamental shift to how we treat space as a domain, so the culture has changed because the mission has changed, the leadership will change, the prioritization of the resources will change and then our approach to developing capability will change.”