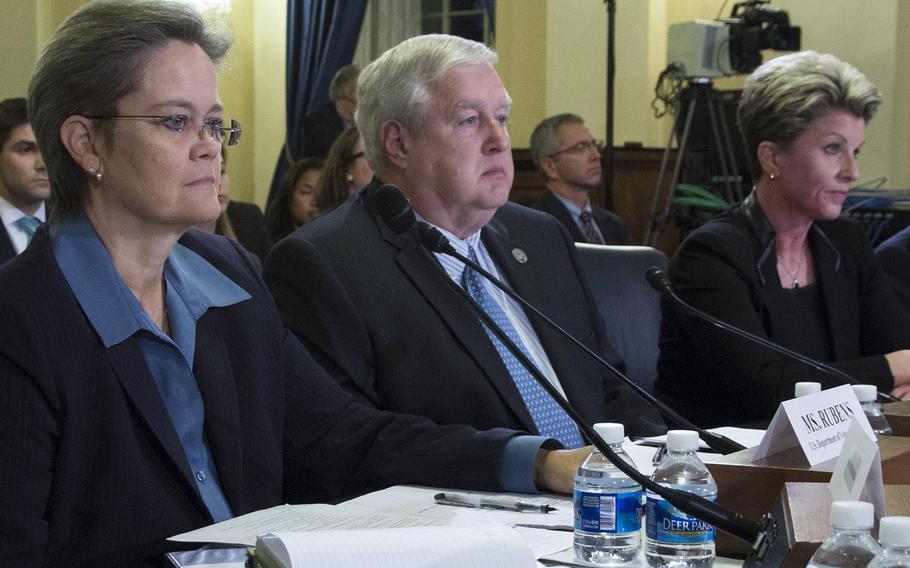 WASHINGTON — Some employees across the scandal-ridden Department of Veterans Affairs reacted with disbelief when two directors were reinstated Monday despite findings of wrongdoing and as VA Deputy Secretary Sloan Gibson tried to tamp down the controversy.

“We were hoping that we’d start seeing an upswing in change and accountability,” said Germaine Clarno, a social worker at the Edward Hines VA Medical Center in Illinois and co-founder of the national whistleblowers group, VA Truth Tellers. “It’s disappointing, it sets us back.”

Gibson said he was still exploring alternative punishments for Rubens and Graves, even as he expressed his confidence in them. Gibson visited Philadelphia on Monday to hold two town hall meetings with employees.

“The overarching theme today is for all of us to get back to the veterans’ business,” he said later Monday in a conference call with reporters. “This has been a considerable distraction for a long period of time.”

A VA Office of Inspector General’s report found Rubens and Graves manipulated the hiring system to get moved to positions of lesser responsibility while maintaining the same salary.

The VA disputed the allegations and instead found the women guilty of the less serious offense of not recusing themselves from the relocation process, in which they received about $400,000. The VA ordered the women demoted and reassigned.

However, the Merit Systems Protection Board overturned the VA’s punishment, part of a growing battle between the federal employee appeals board and the department. The VA also has been at odds with the Inspector General’s office, which Gibson said Monday has issued findings not supported by evidence that have left him “quite frustrated.”

Kristen Ruell, a whistleblower and Philadelphia VA Regional Office employee who met with Gibson on Monday, said she wants to rebuild the relationship between rank-and-file employees and the top levels of VA leadership. However, she said decisions to return leaders accused of wrongdoing to their jobs makes it seem like there is a double standard for top executives.

“I do feel like at times the top leaders at the VA are not being sympathetic to employees who have gone through a lot this year,” she said.

Some employees in Philadelphia were shocked to see Rubens back at work, and thought the reinstatements would keep people from speaking out about future wrongdoings.

“It’s going to have a chilling effect on whistleblowing,” said Steven Greenberg, a claims assistant at the Philadelphia veterans service center.

Neither Rubens nor Graves could immediately be reached for comment.

Gibson said he is still looking into imposing a lesser punishment for what he called Rubens’ and Graves’ “errors in judgement.” He acknowledged he has missed the one-week deadline that he imposed Feb. 2, which he attributed to delays in obtaining transcripts of the directors’ appeal hearings.

In a statement released Monday, Gibson said his new proposed disciplinary actions “do not diminish the confidence VA leadership has in the abilities of Ms. Graves and Ms. Rubens to manage their offices, lead their employees and provide benefits to veterans.

“The disciplinary actions I took and any follow-on actions I may elect to take as a result of the initial actions being overturned, were based on the lack of judgment they displayed when they did not recuse themselves from the relocation decisions as quickly or as forcefully as they should have,” he said in the statement. “Allegations of unethical behavior in the Inspector General report were not supported by any of the evidence I reviewed.”

Cathy Gromek, a spokeswoman for the VA Office of Inspector General’s office, defended the IG report on Rubens and Graves, pointing out Gibson himself found their actions inappropriate.

In earlier statements that Gibson made about Rubens, he said he had “lost confidence in (her) ability to function effectively as a senior executive.”

But Gibson said Monday he does have confidence in Rubens and Graves.

“The judge issued a lawful order that returned Kim Graves and Diana Rubens to the senior service and that’s the context in which I have to act,” he said. “Moving them off into some kind of make-work role, that is not right for taxpayers and not right for veterans.”

After the quasi-judicial MSPB overturned the punishments for Rubens and Graves in January, it reversed the firing of Linda Weiss, director of the Albany-Stratton VA Medical Center in New York. The board ordered Weiss, who was accused of not responding to patient abuse, to be reinstated. Gibson has vowed not to implement the order.

Lawmakers and VA officials have blasted the actions of the board. Rep. Jeff Miller, R-Fla., chairman of the House Committee on Veterans Affairs, has called for an overhaul of the federal employee disciplinary system.