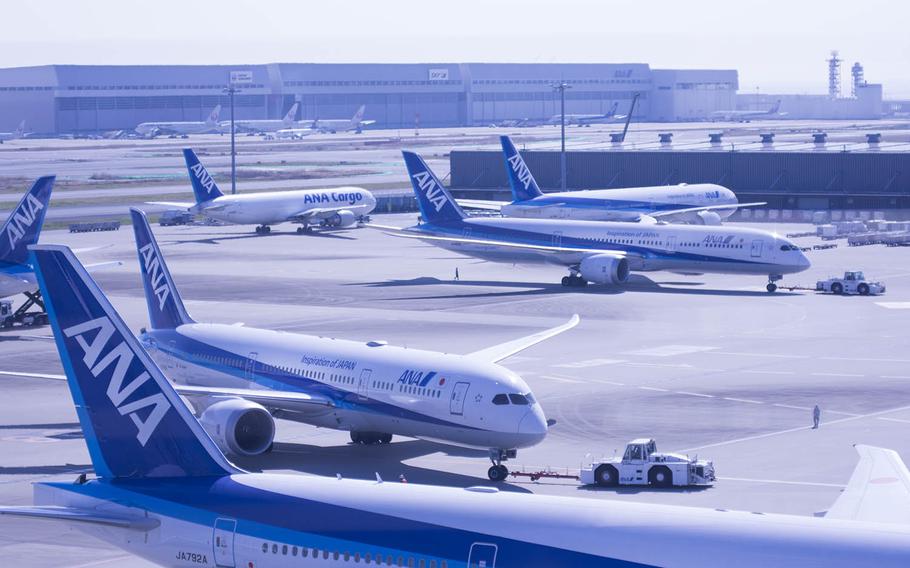 Commercial jets are pulled to their gates at Haneda International Airport in Tokyo, March 18, 2020. (Akifumi Ishikawa/Stars and Strip)

YOKOTA AIR BASE, Japan — Some U.S. military personnel are still able to come to Japan despite a policy imposed Friday that bars entry for those arriving from the United States and 72 other countries.

Japan’s travel ban comes as the nation reports its biggest daily increase in new coronavirus cases to date with 277 people, including 97 in Tokyo, testing positive Thursday, according to Kyodo News. Japan’s Ministry of Health, Labour and Welfare reported 2,617 cases and 63 deaths from the virus in the country as of Friday morning.

“While the [Government of Japan] has barred travelers from certain countries, they are allowing SOFA (status of forces agreement) persons to fly into Japan,” U.S. Forces Japan states on its website. A SOFA defines the legal status of the U.S. armed forces stationed in host countries.

Some travelers have had difficulty with airlines allowing them to board flights bound for Japan or with Japan’s Ministry of Health allowing them to avoid quarantine in the immediate vicinity of the airport after arriving, the website states.

“Any SOFA members who are authorized to travel and will be arriving in Japan on or after April third will be quarantined in the vicinity of the airport unless they have an exemption memo issued from the Ministry of Foreign Affairs,” USFJ spokesman Air Force Col. Robert Firman told Stars and Stripes in an email Friday.

“Members who have received their exemption memos from their gaining units are not permitted to take public transit from the airport, and will be restricted on base for fourteen days upon arrival. All members must coordinate with their gaining units before departing the US.”

Once they arrive in Japan, U.S. military personnel aren’t allowed to transfer to domestic flights or use other forms of public transportation.

“All SOFA personnel are not permitted to use public transportation upon arrival and will undergo a 14-day quarantine at their installations,” USFJ tweeted Friday.

Firman said Friday that “very few” people are still proceeding with permanent change of station moves to Japan and some mission-essential personnel are arriving in the country.

The best way for SOFA personnel to arrive in Japan for travel to Misawa Air Base, Marine Corps Air Station Iwakuni, Sasebo Naval Base or installations on Okinawa is via the Patriot Express, a military charter flight, the USFJ website states.

“This will allow for uninterrupted travel to their final destination,” the website states.