Soldiers on motorcycles might be most effective in Afghanistan 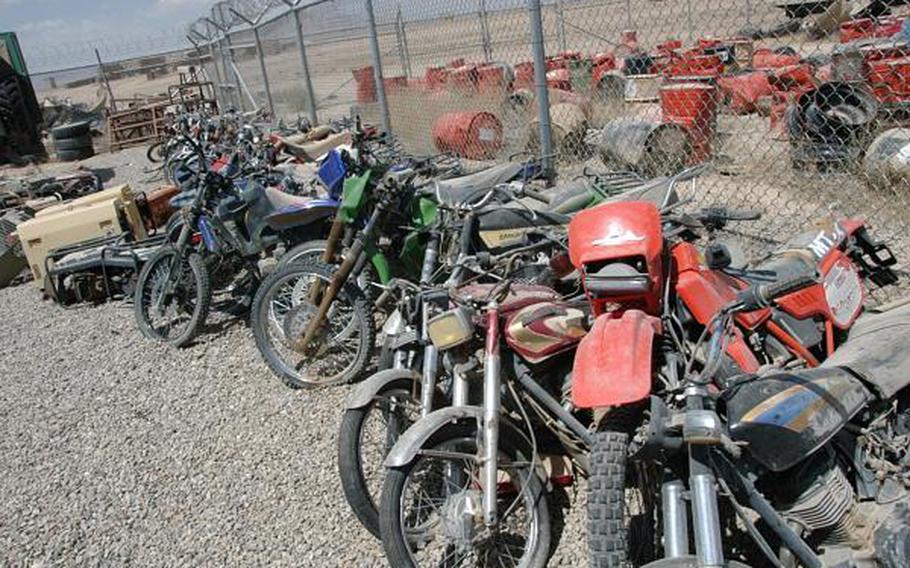 Confiscated Taliban motorcycles rust in a yard at Forward Operating Base Apache, Zabul Province, Afghanistan. While the Taliban has relied on motorcycles to carry out the attacks, few coalition armies are using the lighter, faster vehicles. (Seth Robson/Stars and Stripes)

Confiscated Taliban motorcycles rust in a yard at Forward Operating Base Apache, Zabul Province, Afghanistan. While the Taliban has relied on motorcycles to carry out the attacks, few coalition armies are using the lighter, faster vehicles. (Seth Robson/Stars and Stripes) 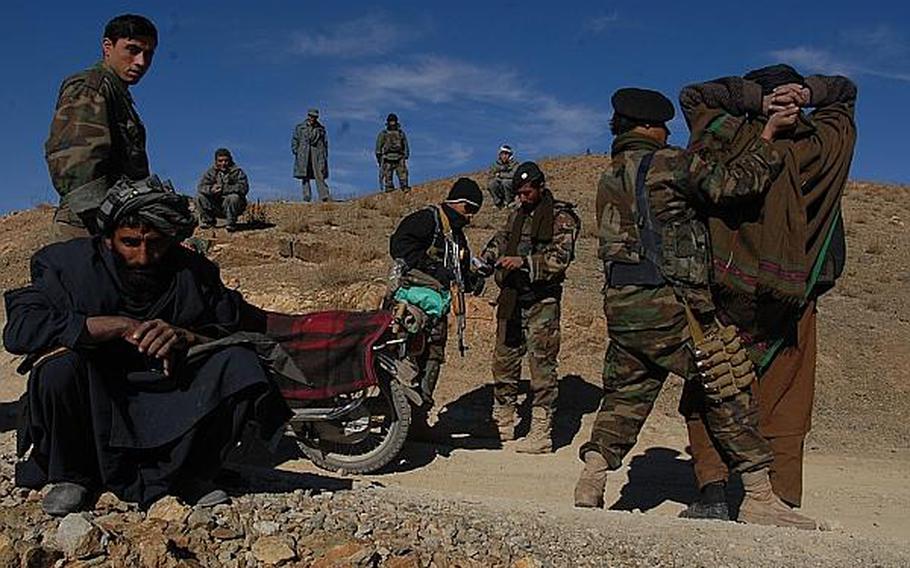 Afghan soldiers search a pair of motorcycle riding suspected insurgents in Zabul Province in December 2007. While the Taliban has relied on motorcycles to carry out the attacks, few coalition armies are using the lighter, faster vehicles. (Seth Robson/Stars and Stripes) 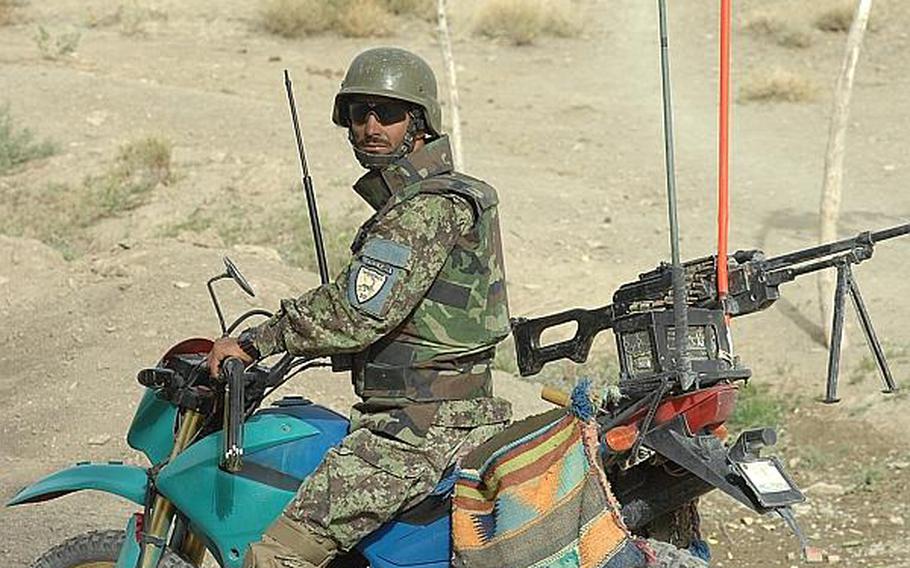 An Afghan soldier rides a motorcycle during a patrol in Zabul Province in 2010. While the Taliban has relied on motorcycles to carry out the attacks, few coalition armies are using the lighter, faster vehicles. (Seth Robson/Stars and Stripes) 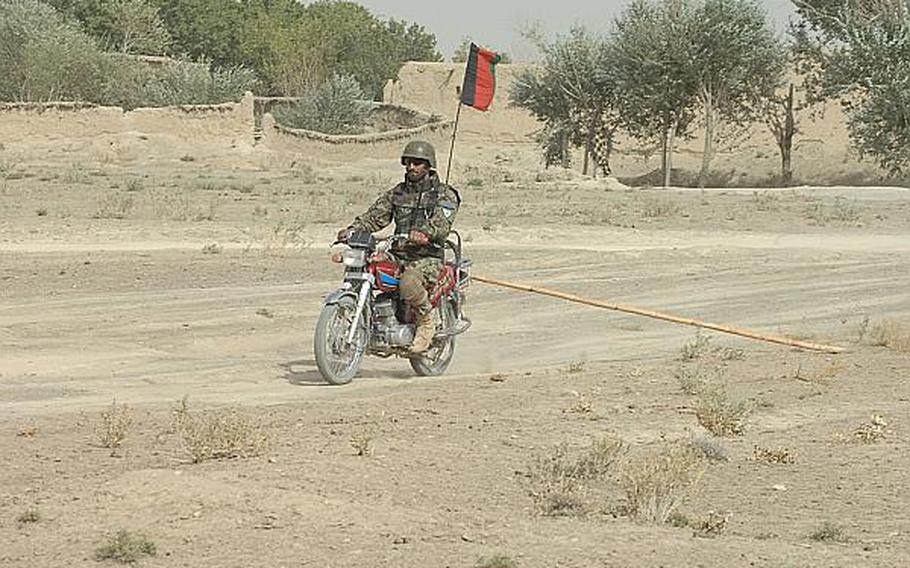 An Afghan soldier drags a rake behind a motorcycle to search for roadside bombs in Zabul Province in 2010. (Seth Robson/Stars and Stripes)

In the past decade the U.S. has spent $45 billion on armored vehicles designed to protect troops against the roadside bombs which cost the enemy next to nothing to build and emplace.

It seems counter-intuitive, but some experts think a safer and more effective way to take on the bad guys might be to ditch the heavy armor in favor of a lighter, faster mode of transport. Many say that in places like Afghanistan, motorcycles would be a cheaper, safer and more effective vehicle for operations than the slow-moving armored personnel carriers preferred by the U.S. military.

It’s not a new concept.

In 1916, Gen. John “Black Jack” Pershing used Harley-Davidson motorcycles with machine guns mounted on sidecars during his hunt for revolutionary Pancho Villa along the border with Mexico.

The War Department fielded 60,000 more Harleys in World Wars I and II, and Kawasaki motorcycles are still used by the Air Force and Marine Corps today for air field surveys, convoy control and reconnaissance.

However, the U.S. hasn’t sent motorcycles to its troops in Iraq or Afghanistan.

In contrast, the Taliban routinely uses two-wheelers to mount attacks on Afghan and foreign forces. The insurgents’ machines might be ancient, low-powered and poorly maintained but their expert riders know their way around the goat tracks and dirt roads that cut across mountain ranges and snake through valleys all over the country.

In next to no time, a raiding party can arrive at an Afghan village to pass instructions to local fighters, drop off weapons or plan an ambush. If they’re spotted they can zoom off much faster than most foreign forces can follow in their lumbering, armored vehicles.

As the Afghan War winds down, the U.S. Army is looking at lessons learned and planning for future conflicts where the enemy might employ the same tactics used by the Taliban. Motorcycles could be an option for those building a force for such a future conflict, according to Lt. Col. Jonathan Larsen, 45, of Lexington, Va., a battalion commander with the 25th Infantry Division in Hawaii.

Larsen was one of the last officers to command U.S. Army motorcycles, which were used for reconnaissance during training at Fort Irwin’s National Training Center when he was there in the 1990s, he said.

“It was a way to insert a small team with a very small signature,” Larsen recalled, adding that motorcycles were used by the 101st Airborne Division for reconnaissance in the Gulf War.

Military planners need to decide what trade-offs to make between the mobility of a vehicle such as a motorcycle versus the protection added by a tank or a Stryker, he said.

“I can think of a lot of uses (for motorcycles) but the person designing the force would have to make a decision about taking the risk of having someone exposed and using speed for protection versus the much more methodical approach of the heavy vehicle.”

The effectiveness of being lighter and faster wasn’t lost on Lithuanian Special Forces in Afghanistan’s rugged Zabul Province who, in 2007, parked their armored trucks and cowboyed-up on high-powered Yamaha and KTM motocross bikes to take the fight to the enemy.

In a place where the roads are littered with improvised bombs the move seemed risky, but five years later the Lithuanians were still in the saddle.

“These motorcycles were our lucky card,” said Maj. Liutauras, the Lithuanian commander in Zabul last summer, who, like many special operators, prefers to be identified only by his first name.

The Lithuanians’ first patrols in armored vehicles, were repeatedly ambushed by insurgents on motorcycles, he said.

“They were able to reorganize and hit us hard again and again,” he said.

So the Special Forces adapted. They acquired motocross bikes and set up a training area in Lithuania to learn how to maneuver in rough terrain, jump and chase down skilled enemy riders.

The Lithuanians’ speed on the motorcycles quickly allowed them to chase down enemy observers and prevent ambushes. And the motorcycles were too light to trigger many of the Taliban’s booby traps, often set with heavy springs that allow civilian traffic to pass unharmed but detonate when a heavy armored vehicle passes.

“We are risking a lot but this risk is measured,” Liutauras said, adding that his men often patrolled with just six bikes. “Our aggressiveness and our tempo and advance to contact is always a win.”

Motorcycles are also popular with Afghan security forces, who even use them to drag rakes in search of roadside bombs — a technique not recommended by international troops.

“Everyone rides motorcycles in Afghanistan,” Liutauras said. “The main thing is making them understand taking care of them.”

Liutauras said the motorcycles have protected Lithuanian forces in Afghanistan by enabling them to catch more Taliban bomb makers, meaning fewer bombs in their area of operations.

The insurgents’ machines were clearly inferior to the Lithuanians’ 450cc to 550cc Japanese and Austrian bikes. However, the Taliban are very experienced riders, Liutauras said.

“They have been living here for hundreds of years so they know all the routes and they can do 80 kmph (50 mph),” he said. “We can do 100 kmph (62 mph) or more but for us it is sometimes hard to catch them because they are light and we have body armor and weapons.”

The only casualties suffered by the Lithuanian motorcycle troops were broken arms and ribs from soldiers who have fallen off their bikes, Liutauras said.

The Lithuanians also have passed on successful motorcycle tactics to Afghan troops, he said.

“We want to train them to drive off road and give them the best expertise,” Liutauras said. “When ISAF (International Security Assistance Force) forces go, their fast moving motorcycles will be one of the most effective measures.”

Yet, any plans for future conflicts take into account the fact that the U.S. has spent a lot of money on up-armored Humvees, Mine Resistant Armor Protected vehicles and V-hulled Strykers, and those vehicles are still preferred in many situations.

“Vast amounts of resources spent on MRAPs might have been avoided by (different) strategic, operational (or) tactical choices (such as patrolling with motorcycles),” said David Johnson, of the Center for Advanced Defense Studies in Washington, D.C.

In Iraq, for example, special operators often patrolled in beat up taxis instead of armored vehicles, he said.

“They (unarmored vehicles) were very effective in avoiding ambushes,” Johnson said but added that they wouldn’t be a good fit for operations such as “presence” patrols or large scale logistical efforts.