Soldier who died at Landstuhl is identified 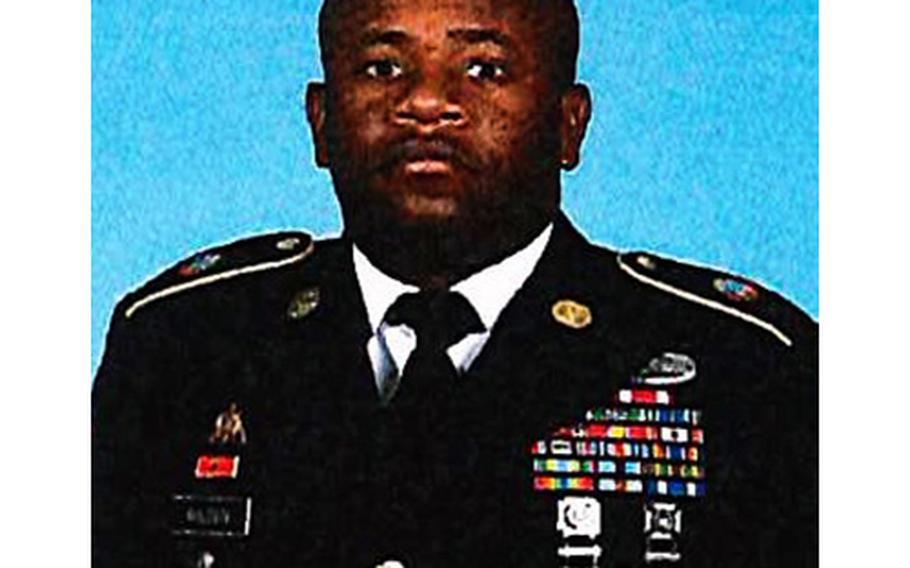 The Pentagon has identified a soldier who died this week from a noncombat incident as 38-year-old Sgt. 1st Class Maitland Deweever Wilson of Brooklyn, N.Y.

Wilson, who died in Landstuhl, Germany, on Wednesday, had been assigned to the 831st Transportation Battalion, 595th Transportation Brigade in Manama, Bahrain, the Pentagon said in a release on Friday. The incident is under investigation, it said.

The 17-year Army veteran, a cargo specialist, had been supporting Operation Inherent Resolve, the U.S.-led coalition battling the Islamic State in Iraq and Syria.

A spokesman for the Military Surface Deployment and Distribution Command, the higher headquarters of the transportation brigade, said Wilson enlisted in August 2000 and was an “integral part” of the battalion where he was serving as a cargo noncomissioned officer.

“His untimely loss is unfortunate, and of course our thoughts and prayers go out to Sgt. Wilson’s family and friends as they go through this difficult time,” said Fred Rice, the command’s spokesman.

Wilson had deployed several times in his career, including to Kuwait, Iraq — twice — and Afghanistan, as well as on a humanitarian assistance mission to Haiti, Rice said. He had been awarded the Meritorious Service Medal, the Army Commendation Medal (five times) and the Army Achievement Medal (twice), among others.

“He was the type of person you meet, and they become family,” said Jarvez Wilkes, who said he met Wilson in 2002 at Fort Story, Va., and later served two combat tours with him. “(He was) a person of great moral character, a person with a genuine and compassionate spirit, a person with a selfless and ‘put others first’-type persona.”

Wilkes was one of several people who posted Facebook updates asking for prayers in late February or early March, saying Wilson was in the hospital in Bahrain suffering from a medical condition.

Rice said he could not confirm medical details of the incident, but said Wilson was in Bahrain at his assigned unit when the fatal situation took place. He was later transported to Landstuhl, where he died.

“Regardless of the cause, it always hurts when a member of the unit passes on,” Rice said.

Wilson’s death is the international alliance’s fourth fatality this year, all in noncombat incidents.

Two American soldiers died in separate incidents in Iraq, one in Anbar province on Jan. 8 and one in Baghdad on Feb. 19. A Scottish soldier died Jan. 31 after reportedly being struck by a forklift while returning from a run at a coalition base in Iraq’s Anbar province.

This week on Facebook, Wilkes and others who served with Wilson expressed shock or sadness at the news of his passing, calling him a “brother in arms,” a leader or a mentor.

“We are better people for knowing him and being apart of his life and his legacy,” Wilkes told Stars and Stripes via Facebook messenger. “As I say my final goodbye to SFC Maitland ‘Chicken Hawk’ Wilson, I will smile and remember him for the joy and laughter he brought to my life.”