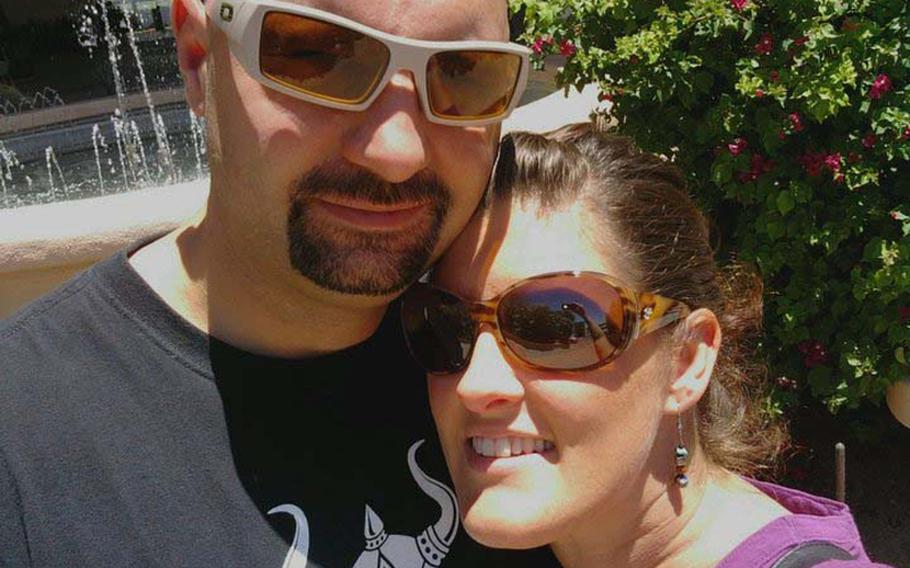 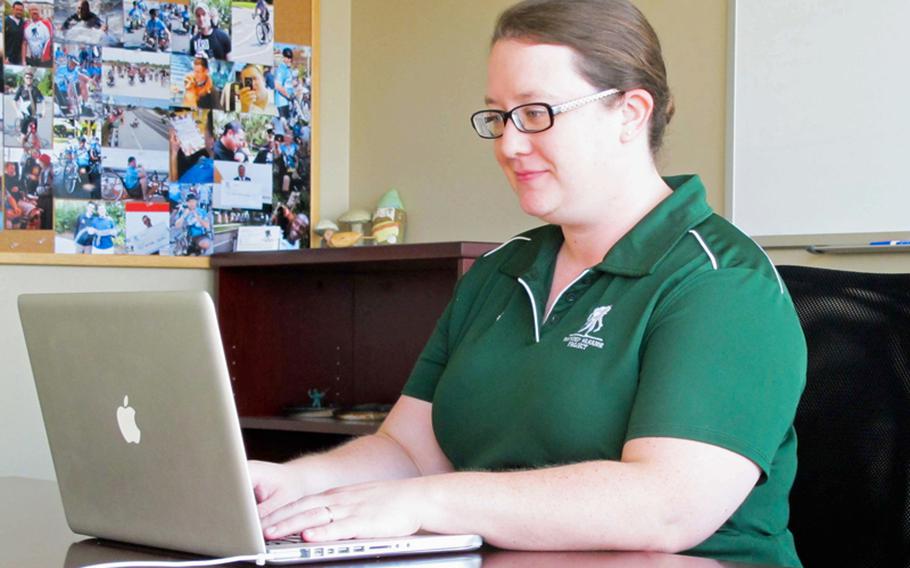 Yet, for seven years, the former Marine was reluctant to seek help.

&ldquo;Obviously I had PTSD and it was undiagnosed,&rdquo; Villont, 40, said recently from his Phoenix home. &ldquo;It&rsquo;s a huge stigma, so I didn&rsquo;t want to find that out. I pretended I didn&rsquo;t have it for many years.&rdquo;

Then, following a couple of violent outbursts, Villont finally contacted a few veterans facilities in Arizona. He was told he would have to wait months for treatment.

&ldquo;Its been over 7 years since my husband returned home from Iraq, just last week he finally decided to seek help for what we assume will be diagnosed as PTSD,&rdquo; she wrote.

Her words caught the attention of Jennifer Boyce, social media manager for the Wounded Warrior Project, who provided the Villonts with people who could help immediately.

&ldquo;It sounds like your family is tackling many challenges together,&rdquo; Boyce wrote. &ldquo;I wanted to let you know that Wounded Warrior Project is here as a resource to help. ... I would love to put you in touch with the director of our Combat Stress Recovery Program.&rdquo;

&ldquo;I can tell you, there is little doubt in my mind that if we had not encountered WWP ... I would be a widow today,&rdquo; Lisa Villont said. &ldquo;He absolutely, positively, would have found a way to kill himself.&rdquo;

Mental health experts say social media websites are game-changers when it comes to reaching out to veterans.

While they shouldn&rsquo;t be viewed as replacements for actual clinical treatment, sites such as Facebook, Twitter, LinkedIn and the Iraq and Afghanistan Veterans of America&rsquo;s &ldquo;Community of Veterans&rdquo; are providing veterans and their families an outlet for referrals, advice and helpful programs, according to the experts. The sites have also become a way for vets to keep in touch and share their experiences with others &mdash; something the experts say is invaluable for recovery.

At most any hour of the day, Boyce can be found in front of her computer looking for veterans in need of help.

Posts that emphasize struggles with home foreclosures, injuries, thoughts of suicide and symptoms of PTSD are met with a caring note from Boyce and a referral to a professional who might be able to help.

The Wounded Warrior Project Facebook page is one of the most traversed sites for veterans &mdash; with about 450,000 followers &mdash; and the number of people Boyce has connected with has exploded in the past two years.

&ldquo;The incredible growth in referral volume has been a bit of a surprise, and it shows no sign of slowing,&rdquo; said Boyce, who has hired a second full-time staffer to help her monitor the site. &ldquo;There&rsquo;s a great sense of relief when [veterans] learn that we&rsquo;re here to help.&rdquo;

The number of referrals to the proper mental health or counseling professionals can vary, but Boyce said there might be 20-30 referrals in any given week. When the WWP posts something about a specific challenge veterans face, such as PTSD or benefits, the responses increase and can generate 75 to 100 referrals for that single post.

&ldquo;You&rsquo;ll see with many of them that they are not direct requests for help,&rdquo; Boyce said in reference to the posts. &ldquo;We find that many veterans are reluctant to seek help for themselves, even if they are struggling. A big part of our referrals are situations like these, where we reach out and say, &lsquo;We see you&rsquo;re going through a tough time, and we&rsquo;re here to have your back.&rsquo; More often than not, a message like that opens up dialogue that ultimately results in warriors connecting with resources that can help.&rdquo;

Through these postings and private messages, military charities and other nonprofit groups can offer veterans access to support &mdash; filling a void where local assistance might come up short. And the feedback is almost instantaneous, from administrators like Boyce to other veterans who might have already navigated the murky bureaucratic waters.

Dr. Charles Hoge, author of &ldquo;Once a Warrior, Always a Warrior,&rdquo; and the former director of the top U.S. research program in the psychological and neurological consequences of war at Walter Reed Army Institute of Research, has studied and written about the importance of peer-to-peer connections in the recovery process, something nurtured by social media.

&ldquo;Probably one of the most healing things in PTSD is to talk about your experiences that happened downrange,&rdquo; said Hoge, a retired Army colonel. &ldquo;There&rsquo;s something very powerful in being able to narrate your experiences while deployed.&rdquo;

That&rsquo;s where sites like the Iraq and Afghanistan Veterans of America can help.

Unlike the Wounded Warrior Project, the IAVA&rsquo;s Community of Veterans page provides an extra layer of protection from public scrutiny, as many combat veterans only feel comfortable sharing painful secrets with other combat veterans, Hansman said.

&ldquo;We have seen a lot of people post issues such as unemployment and disability claims to our Facebook and Twitter,&rdquo; he said. &ldquo;However, on COV we see the relationship issues, the depression and the suicidal ideations. Basically because of the nature of the community and the typical stigma that would be present on Facebook is decreased.&rdquo;

Overcoming the sense of shame and secrecy is key to seeking help, said Dr. Glenn Schiraldi, author of &ldquo;The Resilient Warrior Before, During, and After War,&rdquo; and professor at the University of Maryland School of Public Health.

&ldquo;An aspect of PTSD is that vets can be very troubled by anything that triggers haunting memories, so they tend to avoid those who talk about war, and even avoid anything that makes them feel,&rdquo; said Schiraldi, a retired Army lieutenant colonel. &ldquo;On the other hand, once they connect with others [online] they might realize that they are not alone.&rdquo;

But, a few encouraging words on a Facebook page cannot replace the treatment a veteran would receive from a professional counselor, Hoge said.

If social media puts treatment and other resources within a click of the mouse, it definitely has value. Only about 50 percent of veterans who need treatment actually get it, he said, and about half of those drop out.

&ldquo;In this generation, social media is so important,&rdquo; Hoge said. &ldquo;There are good treatments out there. Anything that connects [veterans] with others and helps them find things that are useful to them is beneficial.&rdquo;

Veterans just need to be careful.

&ldquo;It&rsquo;s better to start with established programs like Wounded Warrior Project or one of the other many excellent military and veterans&rsquo; charities,&rdquo; Boyce said. &ldquo;If a random civilian reaches out to you and offers help, be smart and cautious, just as you would in any other situation.&rdquo;

Finding others with similar problems was the key for J.P. Villont.

In 2003, the infantryman was attached to the 1st Tank Battalion as a machine gunner during the invasion of Iraq. His unit fought its way through Basra, all the way to Baghdad.

&ldquo;We were in direct combat with the Republican Guard &mdash; their tank battalion,&rdquo; the soft-spoken Villont recalled. &ldquo;I was with 60 tanks so we were rocking and rolling. I saw a lot of destruction.&rdquo;

In the middle of his tour, he went on leave to be with his then-pregnant wife who required an emergency surgery in a California hospital.

He rode out of Baghdad with two body bags next to him.

Villont was supposed to have 10 days of leave before heading back to war. But, word came down that his unit had accomplished their mission and that he was no longer needed in Iraq.

&ldquo;That was pretty surreal,&rdquo; he said. &ldquo;Like the Vietnam vets, I went directly from combat back into civilian life.&rdquo;

He left the Marines and returned to his job in law enforcement.

Not long after, his troubles began.

First, he assaulted a neighbor who shot bottle rockets toward his home in the middle of the night; Villont said it triggered a flashback. He was later jailed for a morning after a domestic disturbance last year. which triggered a six-month investigation. He was cleared after no charges were filed. He was then allowed back to work.

Finally, he sought help but was unsuccessful, and his wife reached out to the web community.

After reading Lisa Villont&rsquo;s postings, Boyce referred the couple to local services and a Project Odyssey retreat with fellow vets. The retreat offered outdoor activities and the companionship of fellow combat veterans, plus counselors.

At first, Villont resisted. But after talking with other vets, he decided to give it a shot.

&ldquo;I didn&rsquo;t want to sit around hugging each other singing &lsquo;Kumbaya,&rsquo;&rdquo; he said. &ldquo;But it was me and seven other vets. We clicked immediately. It was a breath of life.&rdquo;

Now, J.P. Villont exchanges texts, calls, emails and Facebook messages with the other veterans he has met.

He uses social media to monitor legislation and find other outreach organizations, and he received a scholarship from the University of Phoenix to get a master&rsquo;s degree in clinical mental health counseling so he can help other veterans. Villont is retiring from his job as a highway patrolman at the Arizona Department of Public Safety due to injuries from an on-duty crash in March.

Although he is not cured, J.P. Villont no longer ruins family outings because of his outbursts. He&rsquo;s learned he has certain &ldquo;triggers&rdquo; &mdash; his wife calls it his &ldquo;Spidey&rdquo; senses &mdash; and needs to stop before he reacts to them, to ask why he feels threatened. Villont just got out of a 24-day inpatient PTSD clinic in Tucson and is looking forward to starting school in October, thanks to the single post his wife made a few months ago.

&ldquo;It&rsquo;s been a pretty amazing asset,&rdquo; Villont said. &ldquo;You&rsquo;re able to learn about this stuff from your computer. ... Once you start opening doors there is no end to this stuff.&rdquo;