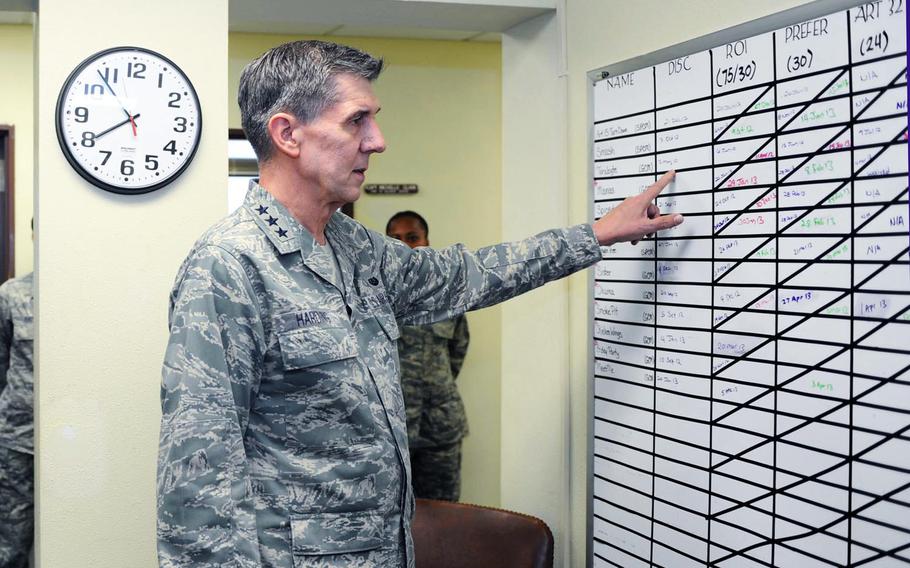 An Air Force judge has ruled that the service’s top legal officer committed unlawful command influence in a sexual assault case, partly for political motives. Nonetheless, the case will proceed to court-martial.

Lt. Col. Joshua Kastenberg, in a July 30 ruling in response to a defense motion to dismiss the case against Airman 1st Class Brandon T. Wright, found that Lt. Gen. Richard Harding, formerly the Air Force Judge Advocate General, had improperly influenced the case or had given the appearance of doing so.

One such instance, the judge ruled, was recommending that Wright’s case be transferred to another court-martial convening authority for a do-over after the first convening authority, Lt. Gen. Craig Franklin, dismissed the case in the summer of 2013. Franklin’s dismissal came after an Article 32 investigative hearing at Aviano Air Base, Italy.

Such transfers are almost unheard of. It happened in the Wright case, Kastenberg’s ruling says, in part because Harding was worried that “the failure to have charges preferred against SrA Wright would enable Senator Kirsten Gillibrand to gain needed votes on a pending bill to remove commanders from the court-martial process.”

The ruling took Harding to task for supposedly telling Col. Joseph Bialke, Franklin’s legal adviser, that sexual assault cases, absent “smoking gun” evidence about an alleged victim’s credibility, should be sent to court-martial. In so doing, Kastenberg wrote, Harding improperly attempted to shape Bialke’s future legal advice. Katsenberg ruled that the forced retirements of Bialke and Franklin after their handling of the Wright case created an appearance of unlawful command influence.

Yet none of these actions affected the current case against Wright, Kastenberg said, because all parties involved in the second investigation — at the Air Force District of Washington — acted independently, with no unlawful command influence. As a result of that investigation, a convening authority sent the case to court-martial.

Katsenberg’s ruling was largely based on the testimony of Bialke, who recounted a phone conversation with Harding — testimony Kastenberg said he found credible. The ruling has roiled Air Force justice officials and angered Harding, who said in a telephone interview with Stars and Stripes that the ruling was “gratuitous” and possibly motivated by resentment.

“These findings are just dead wrong,” he said.

Harding, who retired last year, said Bialke had misconstrued or “spun” the phone conversation, in which Harding said he was trying to find out why the Wright case had been dismissed and whether proper procedures had been followed, because he wanted to appropriately brief Air Force and Congressional officials. “I needed to be able to explain it,” he said. “I didn’t tell him we needed to bend to Congress at all.”

The case was transferred, Harding said, because proper procedures had not been followed. In particular, a 12-page memo from the alleged victim’s Special Victims’ Counsel -- detailing what she said was bias against her client in the original Article 32 hearing -- was ignored, as was a meeting the lawyer requested with Franklin before he decided to dismiss the case, Harding said.

“The concern was a process failure, not a result failure,” he said.

Harding said there was never any intention to force a court-martial. “It was to make sure the process was done right, not for any particular result to occur. It was just, ‘Here’s a case. Take a look.’ Honestly I wasn’t sure what another convening authority would do because I wasn’t sure what the facts were.”

Harding fought strong military opposition and numerous end-runs in his effort to shepherd the service’s Special Victims’ Counsel program to provide alleged victims with lawyers to advocate for them throughout the criminal justice process. He suggested that lingering ill will toward him and the program could have influenced Kastenberg’s ruling.

The same judge, he noted, had ruled against allowing Special Victims’ Counsel to be heard at courts-martial, a ruling that the military’s highest court overturned.

He said Bialke’s version of their phone conversation was likely colored by an attempt at self-justification after the latter had made mistakes in advising Franklin.

Harding said he had nothing to do with either officer’s ouster. Bialke was “early-retired” by a board. Franklin voluntarily retired, losing a star in the process, after Air Force Secretary Deborah James reviewed the Wright case, Katsenberg noted. She said she’d lost trust and confidence in Franklin, who was informed he’d be removed from command,.

Franklin had been at the center of a high-profile case involving Lt. Col. James Wilkerson. He overturned the fighter pilot’s sexual assault conviction, released him from jail and reinstated him. That caused Congressional revulsion, and some discretionary powers were removed from commanders.

The Wright case began in 2012 at Aviano Air Base, where he was accused of forcing himself on a staff sergeant as they watched a video late at night in her apartment. He said any sex was consensual.

Wright’s defense has consistently argued that charges against him should not have been brought a second time, that unlawful command influence had tainted the case and that the case should be dismissed.

In January 2014, in a second Article 32 hearing, an investigative officer recommended that the case proceed to court-martial. The new convening authority, Maj. Gen. Sharon K. G. Dunbar, along with her legal adviser, ordered the case to trial.

Harding agreed that the transfer was exceptional and acknowledged that he opposed Gillibrand’s bill. “I do not want to see the bill pass. I’ve said so publicly,” he said.

But he said politics played no role in his actions. “If we were interested in the status of Senator Gillibrand’s reform bill, wouldn’t I have called some other (staff judge advocates) and said. ‘No more dismissals of charges’?”

But officials with the advocacy group Protect Our Defenders, which supported Gillibrand’s bill to strip commanders of their powers and give them to professional prosecutors, vouched for Kastenberg’s integrity and expressed concern about the implications of his ruling.

“This should be extremely troubling that an experienced, senior judge found that the Judge Advocate General of the U.S. Air Force engaged in unlawful command influence in part to stop the legislation to reform military justice,” said Don Christensen, POD president and the Air Force’s former top prosecutor.

“The whole case shows the inadequacy of the convening authority system, saddled with inexperienced commanders receiving faulty legal advice from people who are not independent, professional prosecutors,” he said.

The case is now scheduled for trial in October at Joint Base Andrews, Md.