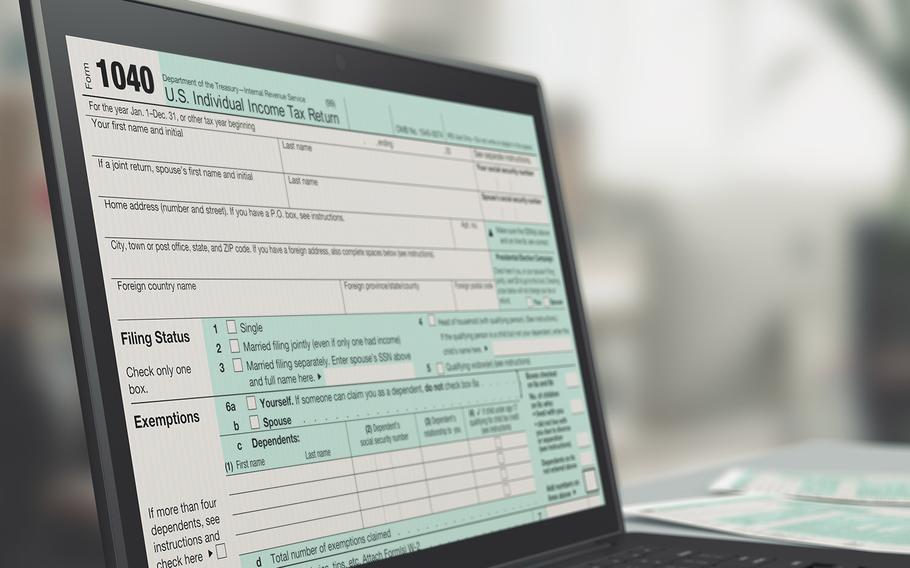 WASHINGTON — The biggest changes to the tax code in more than a generation could mean substantial tax reductions for servicemembers and civilian federal employees when they file their taxes this year, according to the executive director of the Armed Forces Tax Council.

Tax filing season began Monday for taxpayers and last year “marked one of the biggest changes in the tax code…since 1986,” said Lt. Col. David Dulaney, the executive director of the council.

Changes in the tax code that affect the military community come from multiple laws that affect taxes for 2018, including the Tax Cuts and Jobs Act and the Combat-Injured Veterans Tax Fairness Act.

“The good news is that most of our servicemembers should see a substantial reduction in their overall federal taxes for 2018, even if their itemized deductions were either suspended or capped because of the changes in the tax code. And the reason why that is because of the reduced tax rates,” Dulaney said.

This year, due to the Tax Cuts and Jobs Act, families who earn $165,000 or less when filing jointly, which is many military families, could see a reduction of 3 percent overall in their tax rate, according to Dulaney. The child tax credit doubled to $2,000 per child and standard deductions also doubled for 2018.

As an example, a military family with two children earning $100,400 in 2018 could see their federal income taxes drop by about $3,000 because their tax rate decreased from 25 percent to 22 percent, according to the Defense Department. Their standard deductions would also increase from $12,700 to $24,000.

For civilians that work for the federal government including the Department of Defense, their moving reimbursements now will be taxed. This means that the allowance will be counted toward their overall taxable income. Dulaney said he has received questions from Defense Department civilian employees about this, specifically people overseas whose cost to move is higher.

“So this is going to include in their taxable income anywhere between $25,000 and $40,000. And so that could potentially bump them up in a different tax bracket and see an increased tax liability because of that,” Dulaney said.

Most of these civilian employees are eligible to apply for the Withholding Tax Allowance and the Relocation Income Tax Allowance, which according to Dulaney’s estimates, could reimburse them for almost all of their increased taxes from the moving allowance. The WTA and RITA allowances are also taxable, which is why it does not cover the entire expense, according to Dulaney.

“So the good news is, is that even though there may be an increase tax liability for some of our civilian employees, the DoD is authorized to cover the vast majority of that increase of tax liability,” he said.

Last July, more than 133,000 veterans were notified they could be eligible to receive a refund under the Combat-Injured Veterans Tax Fairness Act of 2016 for taxes taken from their lump sum disability severance payment. Servicemembers who are discharged from the military due to a medical disability can receive the one-time payment but it cannot be taxed if the injury was combat related or they were notified by the Department of Veterans Affairs that they are approved for disability compensation, according to the IRS website. This affects veterans who received this payment as far back as 1991.

Veterans have until July to claim a standard refund based on the year that they received the pay or file an amended tax return during this tax season, according to Dulaney.

For more information on the new changes to the tax code and how they affect servicemembers, visit militaryonesource.mil.

New tax laws Here are some new tax laws passed in the last three years that will affect filings in 2019 for servicemembers and Defense Department civilians:

• Military families who earn $165,000 or less when filing a joint return will see a reduction of 3 percent overall in their tax rate.

• The child tax credit doubled to $2,000 per child and the standard deductions also doubled for 2018.

• Reservists who could previously deduct drill-duty expenses of travel less than 100 miles will no longer be able to do so.

• Servicemembers who have served in the Sinai Peninsula since June 9, 2015 are now eligible for the combat zone tax exclusion. It has been retroactively applied, so taxpayers who served in 2015 must submit an amended tax return to claim a refund due to the three-year limit. This possibly affects 2,000 servicemembers, according to Dulaney.

• Marines will no longer be able to put down an itemized deduction for the wear, tear and care of their uniforms. IRS regulations previously permitted them to do so because they are not allowed to wear it off duty, unlike the other services.

 More than 133,000 veterans were notified that they could receive a refund for taxes taken from their lump sum disability severance payment. They have until July to file for a refund.

Veterans Benefits and Transitions Act of 2018

• A military spouse can now elect to use the legal residence of their husband or wife in the service for purposes of filing their state and local taxes.