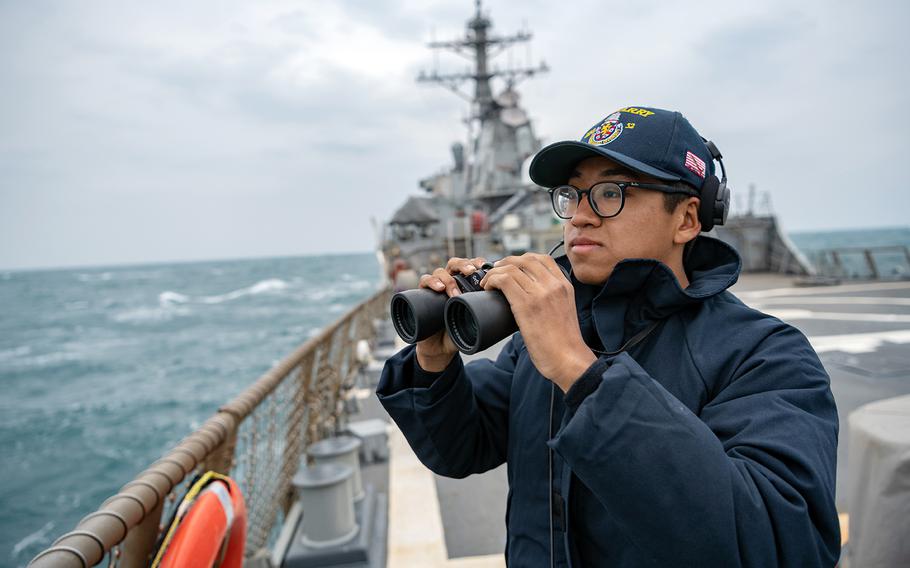 A sailor stands lookout on the flight deck of the guided-missile destroyer USS Barry as it traverses the Taiwan Strait on April 23, 2020. (Samuel Hardgrove/U.S. Navy)

Taiwan’s Ministry of Foreign Affairs is touting language in a proposed version of the U.S. defense spending bill for 2021 calling for expanded military exercises between the United States and Taiwan, including the biennial Rim of the Pacific drills.

The biennial RIMPAC exercise is scheduled to be held Aug. 17-31 entirely at sea in waters off Hawaii; land-based portions of the exercise are canceled this year to prevent spread of the coronavirus.

The Senate Armed Services Committee last week released its version of the 2021 National Defense Authorization Act that includes numerous provisions intended to help Taiwan maintain sufficient self-defense capabilities, including the U.S. “conducting practical training and military exercises with Taiwan, including, as appropriate, the Rim of the Pacific exercise,” and other bilateral naval exercises.

The Ministry of Foreign Affairs said on Friday that the bill’s language “showed Washington valued the island nation’s positive role in maintaining regional peace and stability,” the Taiwan News reported that day.

The full U.S. Senate has yet to vote on the spending bill, and at some future point it must be reconciled with a similar bill approved by the House.

The Taiwan provisions could be altered or deleted in the final version.

Taiwan has long sought inclusion in RIMPAC, during which navies from roughly 25 nations gather for a month of exercises on and around Hawaii and Southern California.

Regardless of the outcome of the final bill, Taiwan would not be able to attend this year’s RIMPAC because, as a first timer to the exercise, its personnel would be required to attend as observers rather than participants.

“Due to the modified at-sea-only construct of RIMPAC 2020, this iteration of the exercise will not feature an observer nation program,” U.S. Pacific Fleet, which oversees invitations to the exercise, said in a statement Monday.

“Taiwan has not previously observed or participated in RIMPAC,” Cmdr. John Fage, a spokesman for 3rd Fleet, which runs the exercise, said in a written statement Monday.

“However, we continue to work with all who are genuinely supportive of a Free and Open Indo-Pacific and to find opportunities to further enhance our capabilities and proficiencies together towards that aim.”

In 2018, only a month before RIMPAC was to begin, the U.S. rescinded its invitation to China to participate. The disinvitation came in response to China’s continued militarization of reefs and islets in the South China Sea, where it had created artificial islands with sand dredging and then constructed hangars, runways and other infrastructure that could be used for military purposes.

China regards Taiwan, which lies just 100 miles off the southern coast of its mainland, as a renegade province that will, and must, reunify under authority of the Communist Party of China at some point.

The U.S. has supported Taiwan’s self-defense for decades through arms sales but, until recently, has sought not to antagonize China with more robust support. The Navy, however, since January has sent warships at least four times through the Taiwan Strait, the 150-mile-wide body of water between the island and the mainland that the U.S. considers international waters. China disputes that assertion.

Under the Trump administration, the U.S. Defense Department has shifted to a “great power competition” strategy focused on countering the military capabilities of China and Russia.

Under the shift, Pentagon and State Department officials have been far more willing to criticize China and engage with Taiwan.