Chairman of the Senate Armed Services Committee Sen. Jim Inhofe, R-Okla., speaks with acting Secretary of Defense Patrick Shanahan prior to the start of a hearing on Capitol Hill in Washington on Thursday, March 14, 2019. During the hearing, Inhofe, said he was "pleased to see that the Department of Defense budget request is $718.3 billion and the overall national defense request is $750 billion." (Carlos Bongioanni/Stars and Stripes)

Chairman of the Senate Armed Services Committee Sen. Jim Inhofe, R-Okla., speaks with acting Secretary of Defense Patrick Shanahan prior to the start of a hearing on Capitol Hill in Washington on Thursday, March 14, 2019. During the hearing, Inhofe, said he was "pleased to see that the Department of Defense budget request is $718.3 billion and the overall national defense request is $750 billion." (Carlos Bongioanni/Stars and Stripes) 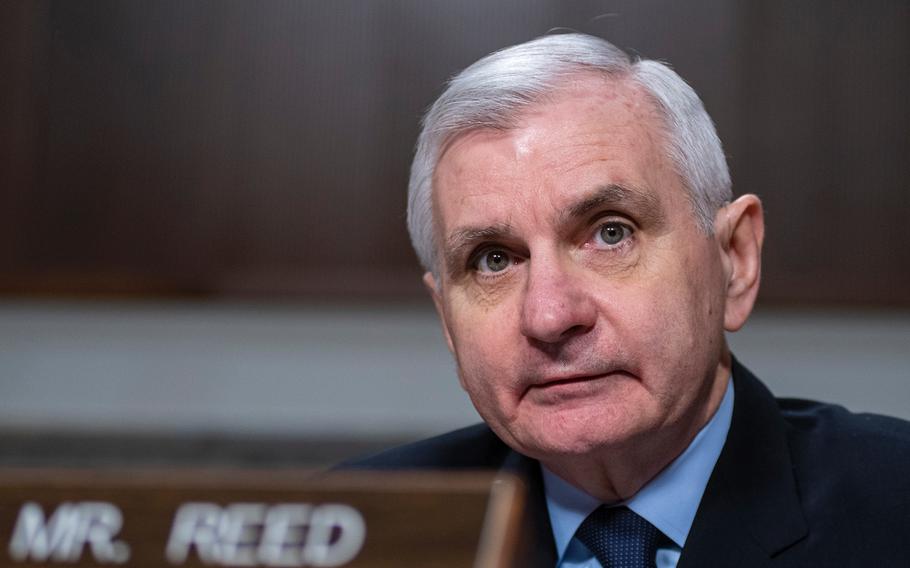 Acting Secretary of Defense Patrick Shanahan testifies during a Senate Armed Services Committee hearing on Capitol Hill in Washington on Thursday, March 14, 2019. Also testifying are, at left, Chairman of the Joint Chiefs of Staff Gen. Joseph Dunford, and, at right, Under Secretary of Defense David Norquist. In response to questioning by Sen. Elizabeth Warren, Shanahan said "there is no slush fund.” (Carlos Bongioanni/Stars and Stripes)

WASHINGTON — Democratic lawmakers hammered top military officials during a congressional hearing on Thursday, highlighting the uphill battle ahead for the Pentagon to push through its $718.3 billion budget for fiscal year 2020.

The lawmakers on the Senate Armed Services Committee grilled acting Defense Secretary Pat Shanahan and other Pentagon officials for “overloading” a war fund request, ongoing efforts to move defense money to construction of a U.S.-Mexico border wall, and sexual assaults in the military.

Overall, President Donald Trump’s administration is requesting $750 billion for national security, which includes funding for the Pentagon and other agencies such as the Department of Energy. Of that, $174 billion is requested for a war fund also known as Overseas Contingency Operations, or OCO.

“We have been presented with a particularly egregious misuse of the OCO account,” Rhode Island Sen. Jack Reed, the ranking Democrat on the Armed Services Committee, said during Thursday’s hearing. “Overloading the OCO request… far exceeds any precedent and cannot be justified… and undercuts the integrity of the entire request.”

Thursday’s hearing, which included Shanahan, Marine Gen. Joseph Dunford, chairman of the Joint Chiefs of Staff, and Deputy Defense Secretary David Norquist, comes on the heels of the Pentagon’s release Monday of its service budget proposals.

Democratic lawmakers also hammered military officials for lack of progress producing a list of military construction projects that could be cancelled for Trump’s national emergency to build a wall on the southern border.

“You’ve had a month,” said Sen. Angus King, I-Maine. “I find it very hard to believe there is not a list.”

Lawmakers also brought up the issues of water contamination at bases and poor military housing conditions.

However, lawmakers largely zeroed in on the proposed budget, with Republicans saying it is needed to meet the military’s growing demands while Democrats raised concerns on the structure of the plan.

“I am pleased to see that the Department of Defense budget request is $718.3 billion and the overall national defense request is $750 billion,” said Sen. Jim Inhofe, R-Okla., chairman of the Senate Armed Services Committee. “I agree that is the right number. We have a lot of work to do if we want to stay ahead of China and Russia in some very critical areas of defense.”

The increased war fund is part of an effort to avoid budget caps requiring defense spending fall under $576 billion in the next fiscal year. It’s a move that leaders in the Democrat-controlled House have already said is a deal-breaker.

Sen. Elizabeth Warren, D-Mass., said the new OCO request is 140 percent higher than the request for the same account for the 2019 fiscal year. At the same time, the demands for overseas contingency operations are not up by the same percentage.

“What we are really talking about here is the establishment of a slush fund to hide what is happening with defense spending and get it out from underneath the statutory caps,” she said. “We just need to be honest with the American people about how much we are spending here.”

Overall, Trump’s budget proposal for fiscal year 2020, which begins Oct. 1, would boost defense spending by about 3 percent, a topline figure that several Republicans have said they support.

During Warren’s questioning, Shanahan disagreed with her comments.

“We have provided … 100 percent transparency, there is no slush fund,” he told Warren. “We can take the money and tie it back to the National Defense Strategy and what we need to defend America.”

The Pentagon’s budget plan for fiscal year 2020 marks its largest-ever budget request that emphasizes the need to modernize the aging U.S. inventory of weapons, begins building a Space Force and would boost troop pay by 3.1 percent.

Trump’s plan to boost defense spending for the third consecutive year calls for a more than $33 billion increase from fiscal year 2019 defense spending allocated by Congress. The Pentagon’s budget proposal for fiscal year 2020 was released one day after the White House unveiled its $4.7 trillion spending plan for the federal government next year, which would cut domestic spending and foreign aid contributions.

Senior defense officials have described their budget plans as “a major milestone” in preparing the military for the great-power competition that they believe will shape the Pentagon’s needs for years to come as rival nations Russia and China build new classes of weapons and seek to challenge the United States’ long-held global dominance.

Stars and Stripes Reporter Corey Dickstein contributed to this report.