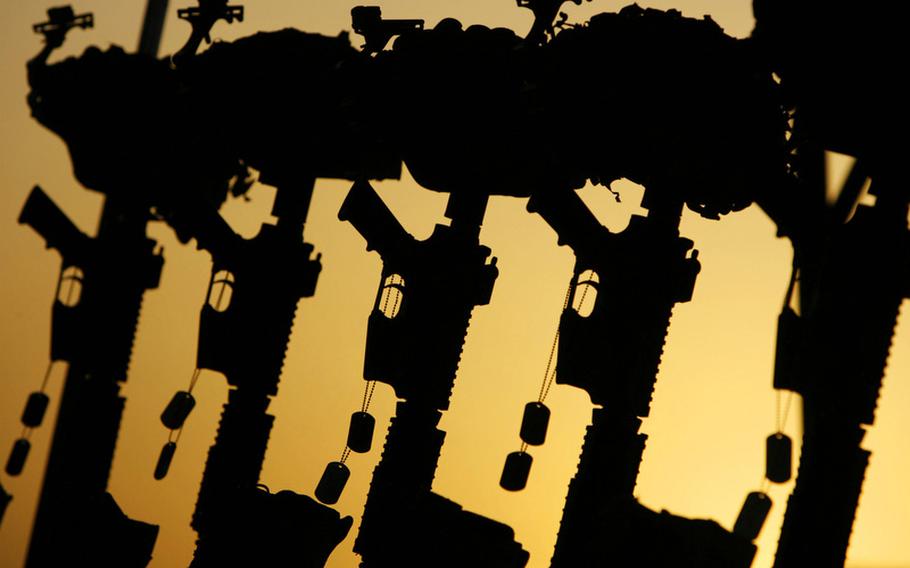 M4 rifles and empty helmets sit in memorial to 5 soldiers killed in Afghanistan in August 2011. (Laura Rauch/Stars and Stripes)

WASHINGTON — The Senate on Thursday cleared the way for a Global War on Terrorism memorial in Washington – unanimously passing the first bill in recent history approving a national war memorial before the fighting is over.

For those who have fought in Iraq and Afghanistan since 2001, the memorial will be a place to honor their dead and wounded – even as those numbers continue to climb.

The unanimous Senate vote threw into stark relief the deaths this week of two American soldiers in a suicide attack in Afghanistan and the wounding of half a dozen more in that bombing and another that followed Thursday.

“We’re looking forward to building a sacred place of healing and remembrance for our GWOT veterans, a place for families to gather to honor their loved ones and for future generations of Americans to learn about a war they will likely grow up alongside of,” said Andrew J. Brennan, the Global War on Terrorism Memorial Foundation founder and executive director.

The bill, which was unchanged from the House bill passed July 28, gives the proposed memorial an exception from the 1986 Commemorative Works Act requiring Congress to wait 10 years after the official end of a military conflict before considering a memorial in the nation’s capital. A similar bill proposed last year did not go through.

Brennan began the project in 2014 when the former Army captain, who flew Black Hawks during the height of the war in Afghanistan in 2010, was on a hike for veterans. He saw Vietnam vets on motorcycles making their way cross-country for the annual Rolling Thunder ride to the Vietnam Veterans Memorial Wall in Washington.

He was struck by the idea of a memorial for veterans of the longest wars in U.S. history.

“I saw what this memorial did for the Vietnam generation,” he said. “It offered a lot of healing for that group, and I wanted something similar for my generation.”

Brennan worked with fellow veterans and family members to meet with congressional staff and lawmakers, pressing them to find a way around the Commemorative Works Act, which he said no longer makes sense. His sister is serving in Afghanistan, he said, and he expects that conflict to continue.

“We are looking at a shifting paradigm of war where we don’t have set start and end dates,” he said. “We are talking about a multigenerational conflict now.”

Jan Scruggs, founder of the Vietnam Memorial project, said the passage of the bill is incredibly important. He said the Vietnam Wall gave veterans of that era a permanent societal acknowledgment that they served honorably.

The bill will go to the White House, where Brennan said staff have assured him it has President Donald Trump’s support. After that, the project will go through a detailed 24-step bureaucratic process that will include choosing a site, selecting a design through competition and constructing the memorial. The foundation is eyeing a site north of the Lincoln Memorial – at the northwest end of the National Mall area – where there is some open land, though it currently contains a mess of snaking roadways.

The bill’s passage also authorizes the foundation to raise funds — estimated at $40 to $50 million — to staff, plan, design and construct the project. Brennan said he expects the memorial to be built by 2024.

“This memorial will be wholly dedicated to our 7,000 brothers and sisters who deployed with us but did not return, and their survivors,” he said. “It is dedicated to the 1 million wounded warriors who are reclaiming their lives back here at home. It is for the soldiers, airmen, sailors and Marines who struggle in their transition from combat deployments.”