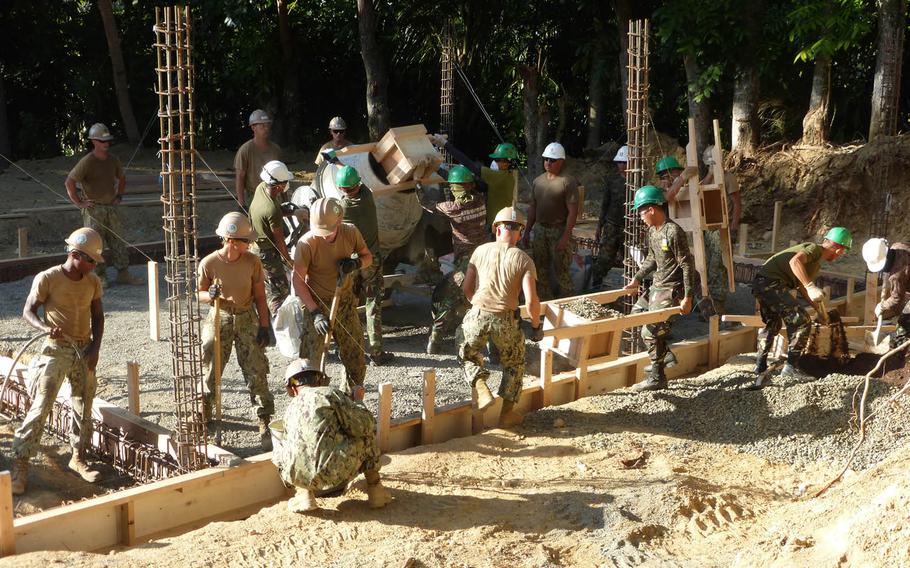 Seabees assigned to Naval Mobile Construction Battalion 3 build a school in Cebu, Philippines, in January. The fighting construction force is getting a new logo for its 75th anniversary next year. (Honer Villanueva/U.S. Navy)

CAMP FOSTER, Okinawa — The Navy has unveiled an updated Seabees logo and theme ahead of the fighting construction force’s 75th anniversary in 2017.

The new logo features the Seabees’ machine-gun toting bee, still wearing a Dixie cup cap, emblazoned over the Seabee enlisted combat pin, the number “75” and the years the battalion has been active, “1942-2017.” The logo also features longtime Seabee mottos “We build, we fight” and “Can do!” along with a new theme: “Built on history, constructing the future.”

The new logo and theme — unveiled Saturday at the Seabee Ball in Washington, D.C. — were chosen from more than 70 entries by a panel of representatives from the Navy, Naval Facilities Engineering Command and the Naval Construction Force, a Navy statement said.

The logo was designed by Navy Chief Jeremy Bustillos, a musician from Joint Expeditionary Base Little Creek-Fort Story, and the theme by retired Air Force Master Sgt. John Dibble.

“’Built on history, constructing the future,’ was an idea that just came to me and stuck,” Dibble said in the statement. “It takes cues from the Seabee spirit of building bridges and paving runways or roadways. I really admire what these sailors have done over the years and continue to do today.”

The Seabees, whose moniker derives from the initialization of “Construction Battalion,” were formed in the aftermath of Japanese attacks on the United States and its territories in December 1941, including Pearl Harbor and Wake Island. Civilian construction workers stationed at these installations faced the gun and the sword for picking up arms against the Japanese invaders. By international law, they were not allowed to resist enemy attacks and faced execution as guerillas if they did so.

Rear Adm. Ben Moreell requested the authority to activate, organize and man Navy construction units on Dec. 28, 1941, and that authority was granted about a week later by the Bureau of Navigation.

During World War II, more than 325,000 men served with the Seabees on six continents and more than 300 islands, including in the D-Day invasion of France and the Marine invasion of Tarawa. They built 111 major airstrips, 700 square blocks of warehouses, hospitals for 70,000 patients, storage tanks for 100 million gallons of gasoline and housing for 1.5 million men.

The competition was launched in December by the Naval Facilities Engineering Command, the statement said. Entries came from artists all over the world.

“I am still in shock that my theme was actually selected,” Dibble said in the statement. “It is an enormous honor and a privilege that my words will represent this historical event.”