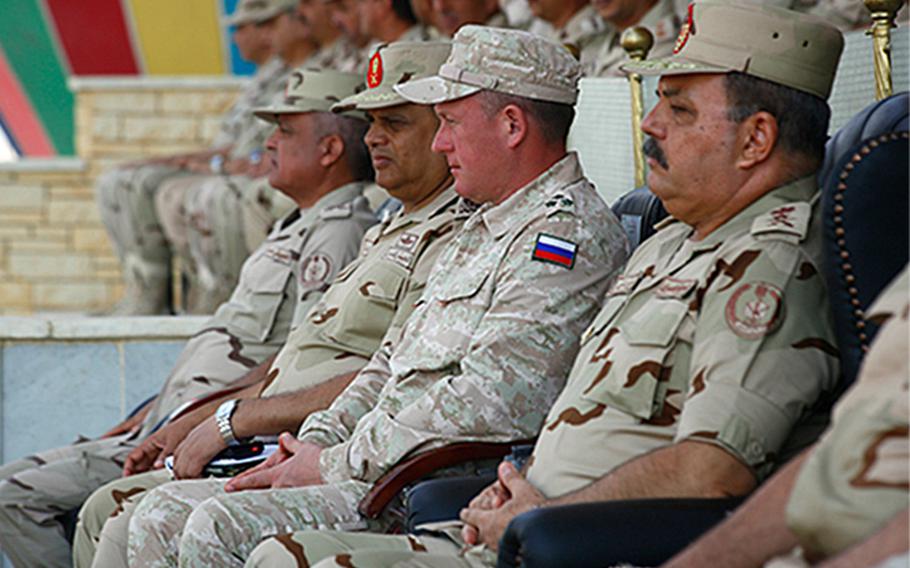 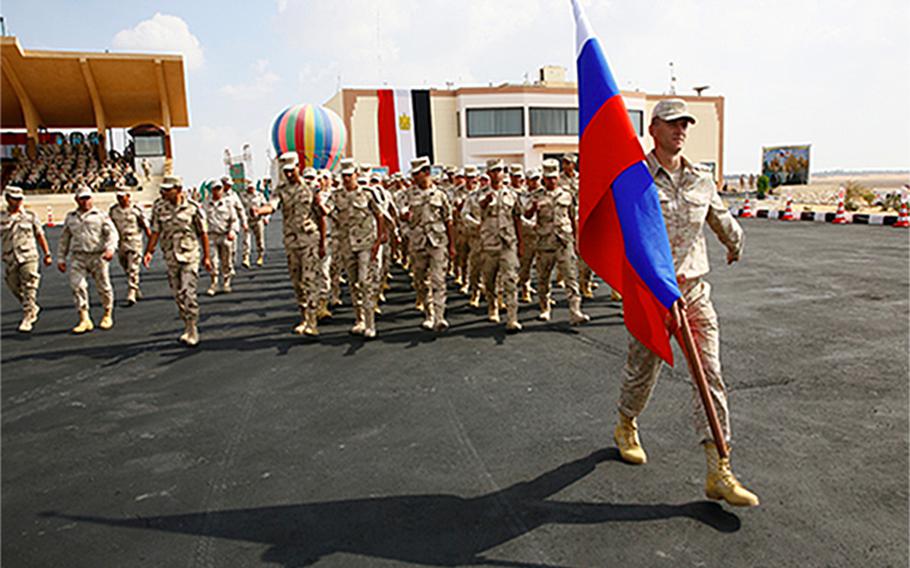 Soldiers march during the opening ceremony of the joint Russian-Egyptian military exercise Arrow of Friendship-2019 in an undated photo at a base near Cairo, Egypt. (Russian Defense Ministry) STUTTGART, Germany — The Russian military for the first time Wednesday launched large-scale air defense drills in Egypt, serving as the latest sign of Moscow’s deepening ties with African militaries, which has captured the attention of U.S. commanders.

The exercises come one week after President Vladimir Putin held a summit for African leaders in Sochi focused on enhancing Russia’s role across the continent, ranging from trade and weapons sales to military partnerships.

“For the first time, the two friendly nations’ military will act hand-in-hand,” Russian Col. Valery Chernysh, who oversees the Arrow of Friendship drills, said in a statement. “The Russian and Egyptian servicemen will exchange experience and learn how to work together when using modern air defense systems.”

While China is the U.S.’s main rival in Africa — Beijing is the continent’s largest trade partner and has ramped up economic and military partnerships for more than a decade — Russia’s attempt to gain a larger foothold is more recent.

U.S.-Egyptian ties have since been strained in connection with restrictions on weapons sales over human rights issues. Moscow has stepped in with numerous deals of its own, including a $2 billion agreement reached this year to supply Egypt with more than 20 Su-35 fighter jets.

In 2017, Moscow and Cairo also agreed to allow, if needed, the joint use of military air bases between the countries.

The two countries also see eye-to-eye on Libya, where both sides back Libyan strongman Kalifa Haftar, a high-powered militia leader and political rival to the country’s weak U.S.-backed central government.

For the U.S., Russia’s expanding presence in Africa and China’s large economic influence has brought on a shift in military strategic focus.

In late 2018, the Trump administration rolled out a new Africa strategy that put countering Russia and China as the top priority, even as U.S. troops continue to conduct counterterrorism missions in places like Somalia.

U.S. Africa Command’s Gen. Stephen J. Townsend said in April that the Russians “are after access and influence to our detriment.”

During the Russian exercises in Egypt, an array of weaponry will be on display. Among the systems being tested are Buk-M2E and Tor-M2E air defense missiles as well as the Pechora S-125 surface-to-air system, the Russian military said.