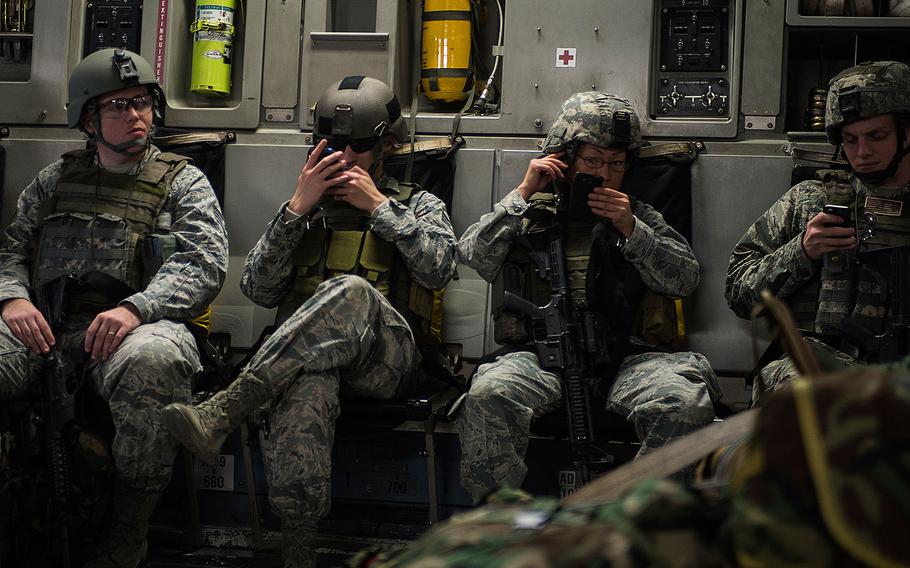 U.S. soldiers from Battle Group Poland participate in the Polish national exercise, Dragon 17, at the Bemowo Piskie Training Area, Sept. 26, 2017. An officer in Poland said recently that his smartphone and others were hacked by a source thought to be Russian, according to media reports. (Jimmy Golden/U.S. Army)

STUTTGART, Germany — Moscow is apparently targeting rank-and-file U.S. military personnel for information while operating in Eastern Europe and while coming to Russia as tourists, according to military officials and media reports.

U.S. troops have found themselves getting pulled out of line during cruise ship stops in Russia, where they’ve been questioned and harassed by intelligence operatives in recent months, military officials in Europe said.

Meanwhile, along NATO’s eastern flank, troops appear to be getting targeted through covert means.

Such incidents, focused on troops assigned to NATO battle groups deployed to deter potential Russian aggression in the Baltics and Poland, signal a return to Cold War-era espionage tactics that were less common in the years after the fall of the Soviet Union.

Lt. Col. Christopher L’Heureux, who leads a 2nd Cavalry Regiment deployed to Poland, told The Wall Street Journal recently that his phone was hacked, along with the phones or social media accounts of at least six of his troops operating not far from the Russian enclave of Kaliningrad.

“They were geolocating me, whoever it was,” L’Heureux said. “I was like, ‘What the heck is this?’”

L’Heureux told the Journal he suspected the hacking was part of a Russian effort to intimidate personnel and glean information.

The Journal documented a series of other cases, including a U.S. soldier’s encounter in Latvia with a suspected Russian operative who knew personal information about the soldier.

U.S. military officials in Europe declined to comment on the hacking incidents and referred questions to U.S. Cyber Command.

Col. Daniel King, a CYBERCOM spokesman, said in a statement that he “can neither confirm nor deny” cases of phones being hacked, but that he had “no reason to doubt what the Lt Col said.”

Since Russia’s 2014 intervention in Ukraine, which prompted NATO to bolster its defenses near Russia’s border, tensions have been rising in Europe.

Western concern about Russia centers largely on Moscow’s penchant for mischief in the cyber realm. Allies have complained about everything from information operations aimed at influencing Western elections to Russia’s deployment of “little green men” to Ukraine’s Crimea peninsula, where disguised Russian troops created confusion as they operated in uniforms without national insignia.

A Russian 2007 cyberattack on Estonia that crippled networks served as an early sign of Russia’s fast-evolving skills in unconventional battlegrounds.

John Deni, an expert on European security with the U.S. Army War College, said Russia’s apparent attempts to hack the servicemembers’ phones shouldn’t come as a surprise, given current tensions and Moscow’s history of targeting troops for information digs.

“Russia has shown again and again that it does not buy into the neoliberal approach of the West — namely, that a rising tide lifts all boats,” Deni said. “Instead, Russia seems intent upon pursuing an almost neo-mercantile approach to the West, where the West’s loss is necessarily Russia’s gain. I assume — and hope — we’re doing the same in terms of intelligence gathering against them.”

The military is reluctant to delve into specifics about Russian information operations. To highlight specific cases as alarming or dismiss them outright as minor harassment could signal to Russia that its methods are either having their desired effect or indicate they are falling short — and need to be stepped up.

But the Army has quietly taken steps to bolster the awareness of personnel stationed in Europe.

Operational security training by the Army currently highlights the ways in which troops can be targeted by intelligence services. And in recent months, on-base training has dealt with concerns about U.S. troops being questioned while in Russia off duty.

“As for intimidating servicemembers and their families while touring Russia, that kind of behavior on the part of Russian intelligence services is probably inevitable, given the perspectives of Russian political elites and especially the Kremlin — namely, that the West is the enemy,” Deni said. “Russian intelligence services probably — and inaccurately — assume those servicemembers and families traveling as tourists are actually gathering intelligence.”

Typically, servicemembers detained in recent months as tourists by the Russians have been subjected to interrogation. They are directed to write down everything about their military affiliation: unit, type of job, commander and level of security clearance, according to accounts of the training courses.

Servicemembers have been advised to reject those requests for information and seek U.S. Embassy support. The interrogations tend to happen during brief layovers in St. Petersburg, a popular stopping point on cruise boat tours.

Military officials haven’t given numbers for what they say is an increase in cases of harassment of military members and their families while visiting Russia.

The State Department has cautioned the military community to consider the “current political-military environment” when planning unofficial travel to Russia. Troops have been advised to not visit the country.

Foreigners in Russia have become victims of harassment, mistreatment and extortion by law enforcement and other officials, a State Department official told Stars and Stripes.

“Police do not need to show probable cause in order to stop, question, or detain individuals,” the official said.