Retirees to gain access to wider menu of dental plans 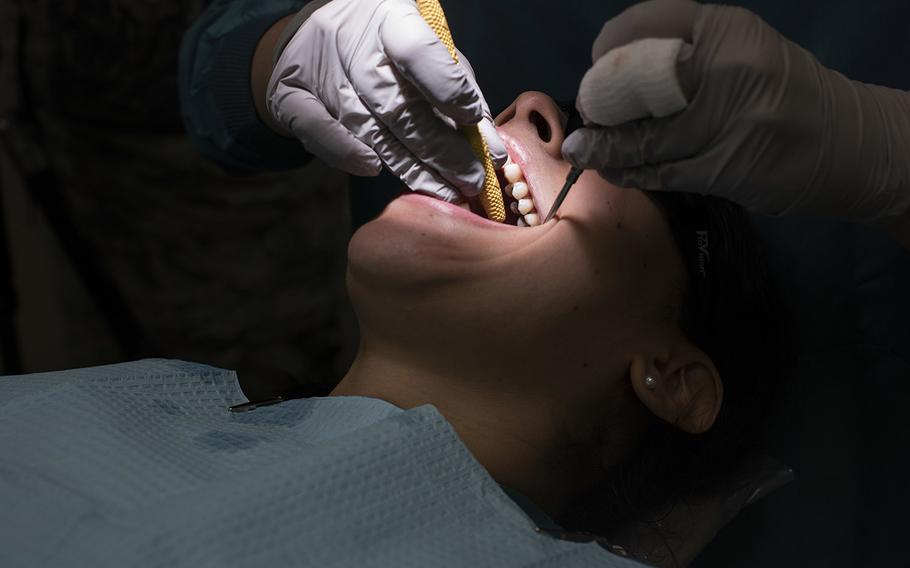 Sometime in October military retirees can begin to review online the various features and monthly premiums of dental plan options for replacing their Tricare Retiree Dental Program (TRDP), which is set to expire after Dec. 31.

Congress voted two years ago to end the TRDP and to allow 3 million military retiree households access to the same menu of dental plans administered for federal civilian employees by the Office of Personnel Management (OPM).

Features of those 10 or more plans, and premiums to be charged in 2019, will be unveiled by OPM and the Defense Health Agency next month. After military retirees and their families decide on what plan is best for them, they will have to enroll in their picks during an open season to run from Nov. 12 through Dec. 10.

Participants will be able to choose either self-only coverage, self-plus-one coverage or self-and-family coverage with premiums adjusted accordingly.

Coverage under the new dental plans will begin Jan. 1.

Military retirees also will be eligible, along with other Tricare beneficiaries including families of active-duty personnel, and drilling reserve component personnel and their families, to buy into one of four vision insurance plans offered to federal civilians. They must be enrolled in a Tricare plan, however.

The combined package opening to military retirees and their families, and the vision care option for most other Tricare beneficiaries, is also called the Federal Employees Dental and Vision Insurance Program (FEDVIP).

Patrick Grady, chief of the Tricare Health Plan, has been coordinating the FEDVIP launch for Tricare beneficiaries with OPM officials for months. It’s important that military retirees understand, Grady said, they will need to take an active role in transitioning from their expiring dental plan to one of the FEDVIP options.

“They will need to get engaged during Open Season, starting the 12th of November, and choose which plan is right for them and their families. This isn’t a passive approach anymore. But we’re excited about the options they’ll have to choose from,” Grady said.

Approximately 840,000 military retiree households, a total of 1.7 million beneficiaries, now rely on the Tricare Retiree Dental Program for dental insurance. It’s been the sole military-backed dental coverage offered to retirees over the years and Delta Dental has serviced the contract for the past five years.

When Congress decided to give military retirees access to the same robust menu of dental options as federal civilians, it also directed the Defense Department to work with OPM to offer vision plan insurance options, and not only to retirees but to other Tricare beneficiaries.

As with the TRDP, premiums and cost shares, including deductibles and co-payments, will be set so that FEDVIP enrollees fully cover the program costs. OPM administers the menu of plans but the government doesn’t subsidize its benefits.

Military participants will be able to pay their premiums through a post-tax allotment from base or retirement pay.

The real advantage to be gained for military retirees and their families in transitioning to FEDVIP will be in the variety of plans open to them, Grady said. When dental plan features and premium costs for 2019 are announced next month and posted at tricare.benefeds.com, he said, retirees and families will have time to determine which plan best fits their dental needs and budget.

“I can speak from a personal perspective because I am enrolled in TRDP but I’m also a federal employee with a family of seven children,” said Grady. “I would have loved to have the type of options that are coming in October given the amount of investment I put into my own children’s teeth.

“I would have had to pay a little more to get the orthodontic coverage that was best for me, but the availability of more choices would have been appealing.”

Tricare beneficiaries currently have modest vision coverage, usually restricted to periodic routine eye exams depending on Tricare plan and beneficiary status. Information on current Tricare vision care can be found online at Tricare.mil/vision. Free vision care on base usually had been available only to active-duty personnel, depending on policies set by the military treatment facility.

For 2019, however, roughly 5 million military households — 7.8 million Tricare beneficiaries — will be eligible to purchase vision care insurance through FEDVIP. Information on new vision care options for military beneficiaries also will be available next month at tricare.benefeds.com.

Before military retirees and their families shop for a dental plan, they should verify that their personal information in DEERS, the Defense Enrollment Eligibility Reporting System, is up to date with recent life events, including new mailing addresses and changes to marital status or number of dependents, Grady said.

He said he and his staff have worked closely with OPM officials to ensure a smooth transition of plans for beneficiaries, particularly dental plan options.

“We have done a lot of preparatory work, mailed out postcards to our beneficiaries. We have a great communication plan,” Grady said. “To get the word out we’ve engaged a lot of different agencies and attempted to leverage all kinds of communication [tools] to make sure our folks understand.”

Congress didn’t estimate program costs in deciding to transition Tricare beneficiaries to FEDVIP. However, the Congressional Budget Office predicts a cost-savings to government of $35 million through fiscal 2026, with some of that offset by implementation costs to educate and transition Tricare users.

The Congressional Research Service, in a recent report, said FEDVIP dental plans typically include: 100 percent coverage of in-network preventive services; no deductibles when using in-network dentists; no waiting periods for major dental procedures such as crowns, bridges, dentures or implants; and orthodontic coverage, under select plans, without a 12-month waiting period or an age limit.

Military retirees and other Tricare beneficiaries are urged to check the Tricare site frequently for information updates. They also can sign up there to receive alerts when new information is added to the site.