Retired admiral calls for US to beef up Navy 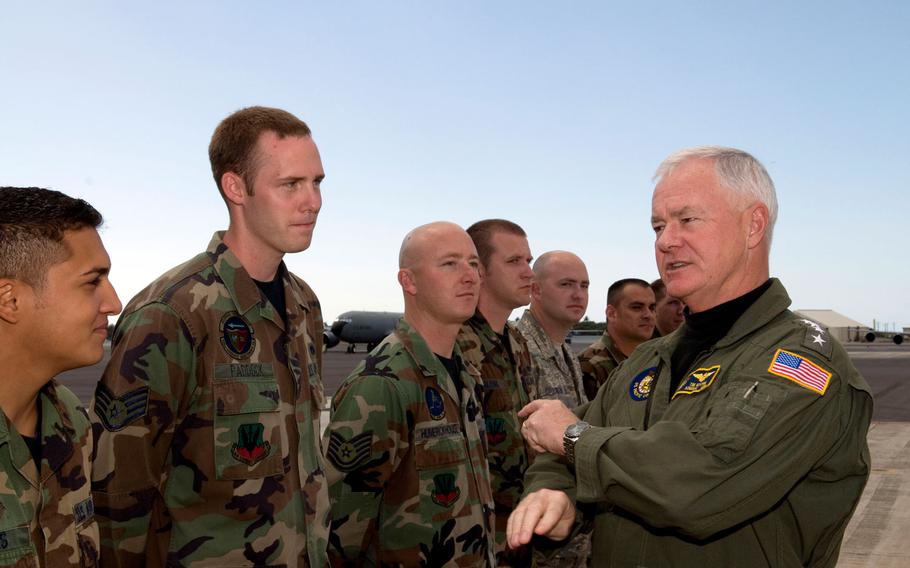 Adm. Timothy J. Keating speaks to flight and maintenance crew members at Hickam Air Force Base in Hawaii in 2007 when he was commander of U.S. Pacific Command. To meet global security demands, the U.S. Navy likely needs 325-350 more ships, or 50-75 more than current levels, said Keating, who is now retired and serves on the board of advisers for defense contractor Camber Corporation. (Elisia Gonzales/U.S. Navy photo)

“As our Navy gets a little bit smaller, we’re facing increasing challenges for funding to get a smaller number of ships to a larger number of ports to demonstrate our readiness and partnership and our presence to all those countries in the Indo-Pacific region,” retired Adm. Timothy J. Keating told reporters Tuesday during a conference call sponsored by the Navy League’s America’s Strength campaign and facilitated by Powell Tate, a public relations agency assisting in the campaign.

The Navy has 273 deployable battle force ships, according to its website.

Keating headed PACOM from 2007-09 and is now on the board of advisers for defense contractor Camber Corporation.

Keating and Mackenzie Eaglen, a defense analyst with American Enterprise Institute, a Washington, D.C.-based think tank, made the case that underfunding and overextending the Navy will have a direct impact on U.S. consumers, aside from national and international security.

The Navy is the de facto high-seas police force protecting vast shipments of food, clothing and electronics equipment made overseas and delivered by container ship to the U.S.

“If there isn’t a cop there on the street to patrol the beat, then people start to get into trouble,” Eaglen said. “It’s no different on the high sea; the Navy and Marines and Coast Guard being there to help prevent the threat of piracy.”

Stable and relatively low prices at the gas pumps are enabled by the U.S. military, she said. Having the Navy stationed at critical shipping choke points around the world — primarily Turkish Straits, Suez Canal, Strait of Hormuz and Strait of Malacca — wards off disruptions that could cause spikes in oil prices, she said.

The Navy also provides security for what’s beneath the water, such as fiber optic cables essential to the cyber realm, Eaglen said. Ninety-five percent of the world’s transcontinental voice and data traffic travels through those undersea cables, according to data provided by Powell Tate.

The Navy should be beefed up to continue providing adequate security, Keating and Eaglen contend.

“If you just look at a simple supply-demand matrix, we know the current Navy is simply too small,” Eaglen said.

That starts with more aircraft carriers, they said.

“I’ve heard senior Navy officials say they have an 11-carrier Navy for a 15-carrier world,” Eaglen said. “And actually we’re a single-digit carrier nation because one’s always in layup and Congress has waived the 11-carrier requirement, so we really have nine carriers.”

The Navy’s deployment tour length has expanded over time, which indicates it is “simply too small and that the demand is not following the requirements,” she said.

The Navy also needs another six submarines, Keating said, noting that it should begin replacing the Ohio-class Trident nuclear submarine fleet, slated to begin in 2029.

“That’ll be an important and expensive program for us nationally and a strategic matter,” he said.

Because so much of the world’s goods are produced in China and shipped through the South China Sea, that relatively small body of water is garnering more and more of the Navy’s attention — particularly as China continues to assert sovereignty claims over many of the sea’s uninhabited islands.

“Unfettered access to maritime domains depends upon frequent presence of United States Navy ships and the Marines on some of those ships,” Keating said. “I am convinced that it’s of vital national and international importance to all of us to maintain that presence throughout the Asia Pacific region which calls for a stronger Navy over the many years ahead.”

Keating was asked whether China’s sovereignty claims over the Spratly Islands, near the Philippines, where it has expanded tiny atolls by hundreds of acres with dredged sand, creates navigational issues for the Navy.

“I wouldn’t hesitate to fly over them or steam very close to them,” he said.