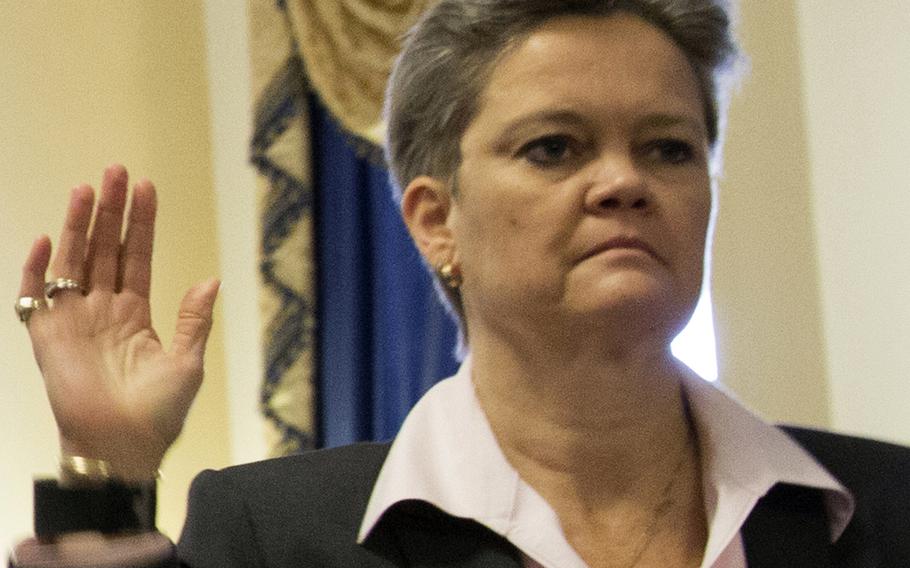 Diana Rubens, director of the Department of Veterans Affairs' Philadelphia regional office, is sworn in at a House hearing in April, 2015. (Joe Gromelski/Stars and Stripes)

WASHINGTON — A senior Department of Veterans Affairs manager who was supposed to clean up a beleaguered regional office abused her position for financial gain, part of a wider scheme to give stealth raises to executives, according to a VA Office of Inspector General report released Monday.

The inspector general had been investigating Philadelphia VA Regional Office Director Diana Rubens since March, after it became known that she received nearly $300,000 in compensation to move about 140 miles from Washington to Philadelphia. While the inspector general’s office concluded that her moving expenses were allowable, it found she and one other executive had manipulated the VA hiring system to create vacancies they sought for financial gain in an era of government pay freezes.

The inspector general has made a criminal referral to the District of Columbia U.S. Attorney’s Office for actions by Rubens and Kimberly Graves, who is accused of a similar scheme to become director of the St. Paul Veterans Affairs Regional Office. No charges have been filed.

Monday’s report could trigger one of the biggest shakeups in the VA since the nationwide scandal broke in April 2014, costing then-VA Secretary Eric Shinseki his job. While other VA executives have lost their jobs or resigned under pressure, the latest IG report implicates two senior managers, an undersecretary and two of her deputies.

Rubens and Graves retained their salaries -- $181,497 and $173,949, respectively -- despite taking new positions with fewer responsibilities at lower rungs on the federal pay scale. Together they received about $400,000 in moving expenses, and the IG report recommends that the VA consider recouping those costs.

When Rubens took over the Philadelphia office in June 2014, VA officials said she was sent to clean up a regional office beset by problems including rodent-infested conditions, boxes of ignored mail that might have cost countless veterans their benefits, and a manager who asked employees to pay his wife to communicate with the dead at a party. However, the VA didn’t seek out Rubens. The report says that Rubens used her position as deputy undersecretary for field operations to transfer the former Philadelphia director and position herself to get the job.

In reviewing job changes for 22 senior VA executives, the IG found a pattern of employees being moved to increase their salaries or keeping their salaries after responsibilities were reduced. The VA paid $1.3 million in moving expenses for those executives and increased their salaries by more than $300,000.

“We found that Ms. Rubens inappropriately used her position of authority for personal and financial benefit when she participated personally and substantially in creating the Philadelphia (Veterans Affairs Regional Office) vacancy and then volunteering for the vacancy,” the report said. Veterans Benefits Administration management “used moves of senior executives as a method to justify annual salary increases.”

The report also recommended that the VA consider disciplinary action against VA Undersecretary for Benefits Allison Hickey and two deputy undersecretaries for their roles in Rubens’ move to Philadelphia. Hickey has said she handpicked Rubens for the job and has vehemently defended her in the face of growing public and Congressional scrutiny over Rubens’ moving expenses.

Speaking to a Stars and Stripes reporter at the Philadelphia VA in June, Hickey said of Rubens, “I do see her as part of the solutions. I sent her here because I needed one of the singularly most mature, experienced leaders I could find in our system.”

In light of the report, House Committee on Veterans Affairs Chairman Rep. Jeff Miller, R-Florida, said “Under Secretary Hickey and others in VA leadership knew they could use fear, intimidation, and timely relocation incentives to coerce subordinates to relocate to jobs they didn’t apply for” and that he will be examining whether VA officials misled his committee in testimony about Rubens in April.

“The IG’s report proves that VA’s corrosive culture extends to the highest levels of (Veterans Benefits Administration) leadership and must be immediately rooted out once and for all,” Miller said in the statement. “This report is simply the latest in a long line of investigations showing VA officials helping themselves instead of helping America’s veterans.”

In response to the report, the VA released a statement saying they will conduct a 30-day review of all incentive and relocation procedures.

“In addition, VA will consider all the evidence presented by the IG, collect any additional evidence necessary, and take appropriate accountability actions,” the statement reads.

A woman who answered the phone in Rubens’ office Monday said she was not at work, and Rubens did not respond to an email asking for comment.

The inspector general’s office, who initiated the investigation at the behest of the House Committee on Veterans’ Affairs and has been criticized for being too cozy with VA leadership, initially released a bare-bones report without mentioning names but later released the full report after receiving Freedom of Information Act requests, according to VA OIG spokeswoman Cathy Gromek.