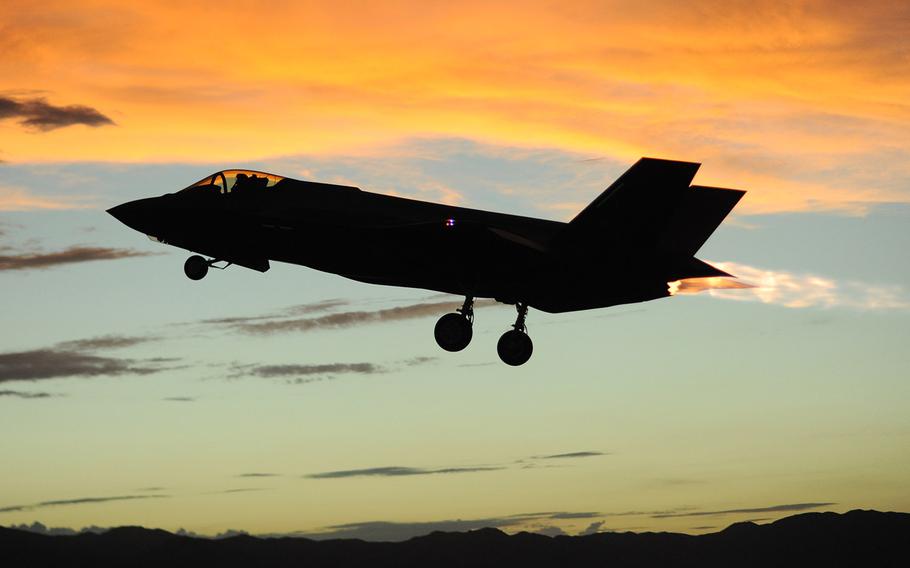 WASHINGTON — The F-35 Lightning II passed a major milestone last month when the Marine Corps declared it operational, but the accomplishment has not silenced critics.

A Washington think tank released a report Tuesday that found the 5th-generation jet – billed as the world’s most advanced fighter – will be outmaneuvered in dogfights with current Russian and Chinese jets as well as the U.S. aircraft it is slated to replace. The report comes after details were leaked last month on a test flight where the F-35 was bested in most aerial maneuvering by an F-16.

“The F-35 will find itself outmaneuvered, outgunned, out of range, and visible to enemy sensors,” according to Bill French, a policy analyst with the National Security Network, a progressive think tank that claims to challenge overly militarized conservative defense policies. “Staying the present course [on the aircraft program] may needlessly gamble away a sizable margin of American airpower at great expense and unnecessary risk to American lives.”

The think tank has an advisory board that includes Sandy Berger, the national security advisor to President Bill Clinton, and Richard Clarke, a senior White House advisor to several administrations. A call and email request for comment were not immediately answered.

After 14 years and over $390 billion invested, the first F-35s entered service just two weeks ago when the Marines completed a battery of tests on a squadron of Harrier variants in Yuma, Ariz., and declared it ready for deployment around the world. Navy and Air Force variants are still being developed, and U.S. weapons contractor Lockheed Martin is working to overcome software and engine difficulties.

The Defense Department says the joint strike fighter will bring cutting-edge technology to the battlefield and become the backbone of United States air power over the next five decades. Congress has backed the program as a costly but necessary upgrade following years of delays, massive cost overruns and a final price tag estimated at $1.4 trillion.

But the F-35 has become a magnet for criticism and doubt.

The blog War is Boring published a leaked report by a test pilot who flew an F-35 against an F-16 in a mock dogfight at Edwards Air Force Base, Calif., in January.

The pilot wrote that the joint strike fighter performed sluggishly against the older jet and was mostly inferior in testing that consisted of “traditional basic fighter maneuvers in offensive, defensive and neutral setups at altitudes ranging from 10,000 to 30,000 feet.”

French compared the power, maneuverability and maximum payloads of the F-35 against the Russian-made MiG-29 Fulcrum and the Su-27 Flanker, which is made by Russia and flown by China.

The U.S.’s next generation fighter is “grossly inferior in terms of wing loading [except for the Navy variant], transonic acceleration and thrust-to-weight,” French wrote in his report, “F-35, Thunder without Lightning.”

“These are the kinds of aircraft the F-35 would most likely face in air-to-air engagements against a high-end opponent,” he wrote.

The F-35 fared little better against the F-16, F-18 and AV-8B Harrier, which it is expected to replace in the current fleet due to its planned versatility. It was weaker in thrust, acceleration and wing loading, according to French.

“These performance factors are critical to building up speed and gaining or retaining energy that enables the aircraft to maneuver and gain advantages in firing position against other aircraft or defeating incoming missiles,” he wrote.

The aircraft also has its defenders inside the Washington beltway.

“Compared with an F-15 or F-16, this is the most survivable tactical aircraft we’ve ever fielded,” said Loren Thompson, chief operating officer at the Lexington Institute who has worked as a consultant for Lockheed.

Thompson has authored recent articles cheering the program as a success and said it is typical for newly developed military aircraft – especially very expensive ones – to be heavily scrutinized. He called the V-22 Osprey tiltrotor aircraft, which killed 19 Marines during development and raised safety concerns before being integrated into the fleet a few years ago, a perfect metaphor for the joint strike fighter.

Thompson said he had not seen the National Security Network report Tuesday morning but that the earlier leaked test documents on the F-16 dogfight in California provided only a partial picture because it involved an F-35 that was not completely operational.

For example, the pilot was not equipped with the F-35’s much-heralded advanced helmet, a key feature in dogfights that provides a 360-degree view through the surrounding aircraft.

“It’s naïve to think that three presidents and three U.S. military services would have spent so many billions of dollars on a program that doesn’t work,” he said.