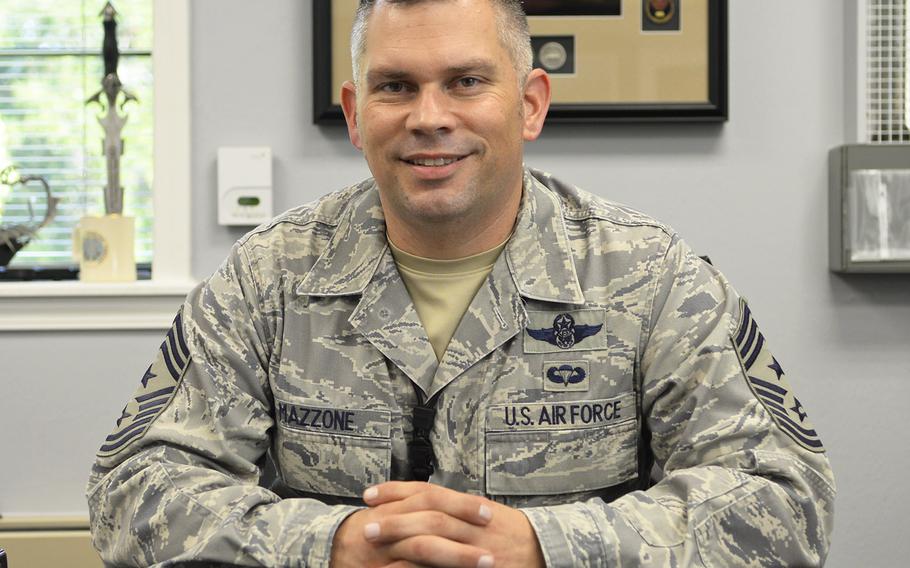 The top noncommissioned officer of the Air Force Global Strike Command and Air Forces Strategic-Air has been removed for adultery and a sexual relationship with a subordinate at his previous post, the command said Friday. An investigation confirmed these findings and Chief Master Sgt. Thomas Mazzone has been reassigned pending retirement.

Gen. Timothy Ray, the command’s commander, sent an email to personnel letting them know of his decision to relieve Mazzone, based on a command-directed investigation into his behavior at his previous assignment as chief of the Air Force District of Washington. The commander of that district, Maj. Gen. James A. Jacobson, ordered the investigation.

The investigation was ordered in September and the report reveals that Mazzone had a sexual relationship with a woman in his chain of command, sent her explicit text messages and bought her a silver, heart-shaped ring. Some interviews in the report indicate the relationship began as early as 2016, though the investigation focused on allegations from June 2017 through November 2017. Mazzone joined the Washington District and the 320th Air Expeditionary Wing at Joint Base Andrews, Md., in April 2016 and left to join Strike Command in Louisiana in December 2017.

Findings from interviews with witnesses show that the two would go to lunch together, meet at the shoppette and exchange gifts by leaving them in each other’s vehicles. The woman wrote a song for Mazzone and sent him a video of her singing it. The lyrics included, “it being so wrong but being so right, nights in his truck, his kiss on her lips,” the report stated.

“CMSgt. Mazzone created the appearance of favoritism and the abandonment of organizational goals for his personal interests when he committed all above mentioned actions,” the report stated. Neither Mazzone nor the woman answered questions for the investigation.

“It is imperative that we create the right culture and climate in our command to become the long range precision strike force that our nation needs,” Ray wrote in the email to command personnel.

Mazzone joined the Air Force in 1990 and had been at the Global Strike Command since December 2017.

Global Strike Command is headquartered at Barksdale Air Force Base in Shreveport, La. As the command’s senior enlisted leader, Mazzone was responsible to the commander on matters concerning the readiness, effective utilization, professional growth and welfare of the command’s airmen.

The command’s mission is to develop, equip and provide combat-ready forces for nuclear deterrence and global strike operations supporting the initiatives of U.S. Strategic Command and other geographic combatant commands. It has more than 33,700 personnel. Weapon systems assigned to the command include intercontinental ballistic missiles and bomber aircraft, UH-1N helicopters, E-4B National Airborne Operations Center aircraft and the Nuclear Command, Control and Communications Center.