An Afghan soldier searches a villager in in Kandahar province while a U.S. soldier looks on. A spike in killings of international troops by their Afghan counterparts has coincided with an effort by the Western military coalition to hand off more security responsibility to Afghan forces. (Heath Druzin/Stars and Stripes)

An Afghan soldier searches a villager in in Kandahar province while a U.S. soldier looks on. A spike in killings of international troops by their Afghan counterparts has coincided with an effort by the Western military coalition to hand off more security responsibility to Afghan forces. (Heath Druzin/Stars and Stripes) Afghan troops train at the Kabul Military Training Center while being advised by Canadian troops. This year has seen a spike in incidents of Afghan troops killing international troops, with trainers and advisers especially vulnerable. (Heath Druzin/Stars and Stripes) 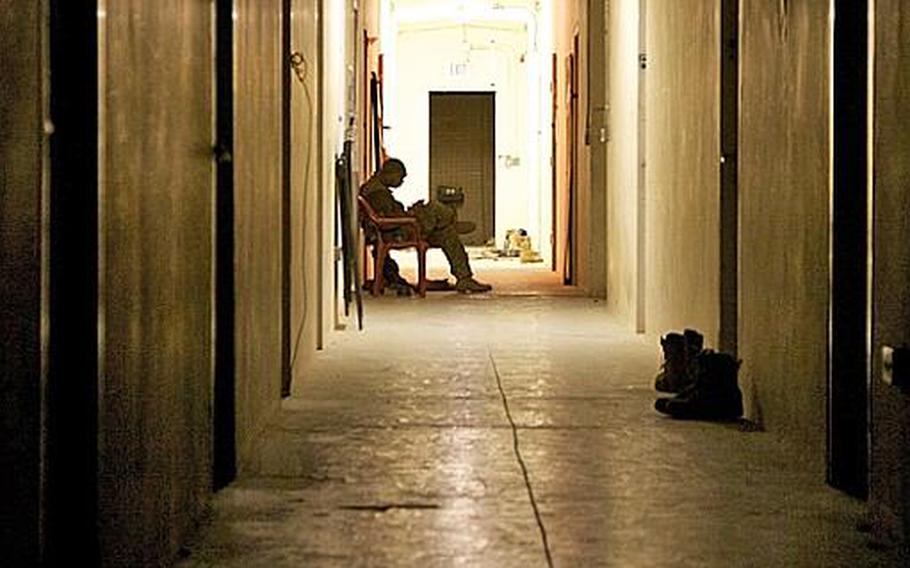 A soldier with Company A, 509th Infantry Regiment, 4th Brigade, 25th Infantry Division, pulls "Freedom Guard" at Dand Patan, a base shared by American troops and Afghan Border Police a few hundred yards from the Pakistan border in Afghanistan&#39;s Paktia province. The company instituted around-the-clock guard shifts as a precautionary measure after American troops burned Qurans at a coalition base in Parwan province in February. (Matt Millham/Stars and Stripes)

KABUL &mdash; More than a year and a half ago, Dr. Jeffrey Bordin warned of the growing threat of Afghan troops turning their weapons on their Western counterparts &mdash; spurred largely by cultural misunderstandings and anger &mdash; and laid out a road map for improving relations in a report commissioned by the U.S. military.

His prescient analysis was quickly and publicly ridiculed by military officials, and Bordin was removed from his post as a research team leader.

Eight months and 45 killings into 2012, the military is now listening, touting new programs to promote cultural understanding among Western troops and using Bordin&rsquo;s report to come up with solutions to a crisis that is undermining the very foundations of the coalition effort to transition the country to Afghan control.

But some are asking: What took so long?

&ldquo;We should have done this a long time ago and put a special focus on (cultural education), and we could have avoided a lot of problems,&rdquo; said Ahmad Majidyar, an Afghanistan expert at the American Enterprise Institute who conducts cultural training for high-level U.S. military officers headed to Afghanistan.

For months, as the so-called &ldquo;green-on-blue&rdquo; killings increased, the Western military coalition dismissed the notion that the incidents represented any kind of trend. Throughout the summer, German Brig. Gen. Gunter Katz, the International Security Assistance Force&rsquo;s top spokesman, would dutifully take the podium at his weekly press conference and deem each latest recent incident &ldquo;isolated.&rdquo;

But after a spate of 10 such killings in two weeks in August and a subsequent call for congressional hearings on the attacks, ISAF and Afghan officials started to shift their position, saying they would take aggressive steps to try to curb the trend, including increased cultural sensitivity training and a massive counterintelligence campaign keep a closer eye on Afghan troops.

&ldquo;The issue of insider threats is very complex,&rdquo; Gen. John Allen, the commander of all coalition forces in Afghanistan, said in a statement Sept. 6. &ldquo;The dedication to eradicating this threat runs from the highest levels in our headquarters in Kabul to every soldier &ndash; both Afghan and Coalition &ndash; fighting to secure the most remote corners of this country.&rdquo;

Bordin&rsquo;s report, &ldquo;A Crisis of Trust and Cultural Incompatibility&rdquo; was gleaned from interviews with hundreds of U.S. and Afghan soldiers and first brought to ISAF&rsquo;s attention at the end of January 2011, though Bordin says push-back on its findings kept it from publication for more than three months.

In his report, Bordin, who has a Ph.D. from Claremont Graduate University&rsquo;s School of Behavioral and Organizational Sciences, warned in stark language that the shootings &ldquo;reflect a growing systematic threat&rdquo; and are &ldquo;provoking a crisis of confidence and trust among Westerners training and working with (Afghan troops).&rdquo;

Few would argue with his analysis now. In the first eight months of this year, 45 international troops have been killed by their Afghan allies, up from 35 such killings in all of 2011. The numbers have been rising for several years, and this year&rsquo;s fratricide toll accounts for roughly 14 percent of all international troops killed in Afghanistan in 2012.

At the time he published it, though, Bordin&rsquo;s research was roundly dismissed by the military, and the then-public report was quickly slapped with a &ldquo;classified&rdquo; label.

&ldquo;The findings are not consistent with our assessment&rdquo; of Afghan forces, then-coalition spokeswoman Lt. Cmdr. Colette Murphy was quoted as saying in the Wall Street Journal in June 2011. The study, she added, &ldquo;was systematically flawed, and suffered from generalizations, narrow sample sets, unprofessional rhetoric, and sensationalism.&rdquo;

Bordin said that following the publication of his report, he was removed from his position as leader of a Red Team &mdash; a research group formed to find solutions to military shortcomings &mdash; and shortly afterward, a decision to renew his contract was rescinded and he had to leave Afghanistan.

Bordin says that to this day, he still has never been contacted by anyone from the international military coalition for his thoughts on how to combat fratricide.

On Thursday, ISAF Deputy Commander Lt. Gen. Adrian Bradshaw acknowledged that Bordin&rsquo;s report is now being used to help guide the response to the fratricide trend, though he rejected the notion that the coalition has been slow to take steps to stem fratricidal killings, now referred to by the military as &ldquo;insider threats.&rdquo;

&ldquo;Certainly the military did push back on certain aspects of that report,&rdquo; he said. &ldquo;But I think the key point is that it has been recognized since the beginning of this campaign that cultural awareness, the ability to work closely with our Afghan colleagues, is absolutely central to delivering mission success.&rdquo;

But below the senior officer level, cultural knowledge is often sparse, and Majidyar said it&rsquo;s critical that coalition forces correct that quickly.

&ldquo;I think the coalition forces need to provide in-depth cultural training and also on Islam [to all soldiers], because I do believe what Gen. (John R.) Allen says &hellip; that the majority of insider attacks are not the result of Taliban infiltration,&rdquo; he said.

Bordin regards the military&rsquo;s refusal to act on his suggestions for a year and a half as a willful error that cost lives. He said at one point, when he returned to Afghanistan last May as the leader of a Human Terrain Systems Team, he was immediately demoted after military leadership found out about his report and he was even forbidden from briefing a general on his green-on-blue findings. He resigned his post shortly thereafter.

&ldquo;That was the height of immoral behavior,&rdquo; he said. &ldquo;I have knowledge that can help save American lives &hellip; and I was ordered not to give that information out to another military entity.&rdquo;

The insider killings didn&rsquo;t come out of nowhere. Soviet soldiers experienced a spike in fratricide toward the end of their disastrous military venture in Afghanistan in the 1980s and there were also spates of such attacks against Americans in Iraq and Vietnam, Majidyar said. So far, it has been individuals turning their weapons on allies, but Majidyar warned that could change as insurgents step up their own recruitment efforts within the Afghan military ranks.

&ldquo;My fear is that if urgent action is not taken in terms of vetting and the recruitment process, we could see this happen with groups (of Afghan troops),&rdquo; he said.

The killings come as the international troops withdraw in anticipation of scaling back the mission after 2014 to a small contingent of trainers and advisers who will have to rely largely on trust in their Afghan counterparts for security.

But at this point, trust between Afghans and their allies has been so damaged that U.S. troops now keep a round chambered in their rifles even when walking inside bases. So-called &ldquo;guardian angel&rdquo; troops often stand guard during meetings and lunches, where allied troops often take off their helmets and body armor, and at other events that might put coalition members in peril.

Yet these short-term security steps run the risk of further alienating the Afghan soldiers with whom the coalition is trying to strengthen its relationship, some experts say. Showing Afghan troops that coalition troops are guests, and not invaders, by treating the Afghans with dignity and respect will go a long way toward combating green-on-blue shootings, said Maj. Fernando Lujan, a special forces soldier who has deployed to Afghanistan and is currently a visiting fellow at the Center for New American Security.

&ldquo;The only people that can truly protect us on the ground are the Afghan soldiers we work with,&rdquo; Lujan said. &ldquo;Afghans have a great reverence for the concepts of hospitality and sanctuary. If we can convince them that we are actually their guests, they will do anything to keep us safe.&rdquo;

Some, though, contend that while the killings must be addressed, there are more pressing challenges for the military mission in Afghanistan.

The killings &ldquo;challenge the heart of the (coalition) strategy&rdquo; but do not appear to be derailing it, said Michael O&rsquo;Hanlon, a security expert at the Brookings Institution and author of the Afghanistan Index. O&rsquo;Hanlon listed the Taliban-affiliated Haqqani network, Pakistani insurgent sanctuaries, weak Afghan governance and widespread corruption as more dangerous problems.

&ldquo;We are gradually on the way out (of Afghanistan) and most forces work well together,&rdquo; he said. &ldquo;This is a big problem and a tragic one, but not, as best I can discern, a threat to the mission.&rdquo;

While the recent steps by ISAF and intense coverage of green on blue shootings seem to vindicate his report, Bordin takes no solace in being proven right. Instead he thinks about the dozens of troops &mdash; 85 by his count &mdash; who have been killed in green on blue shootings since he made his report available to the military. He wonders how many could have been prevented.

&ldquo;It&rsquo;s just tragic that so many lives had to be lost before definitive action was taken.&rdquo;