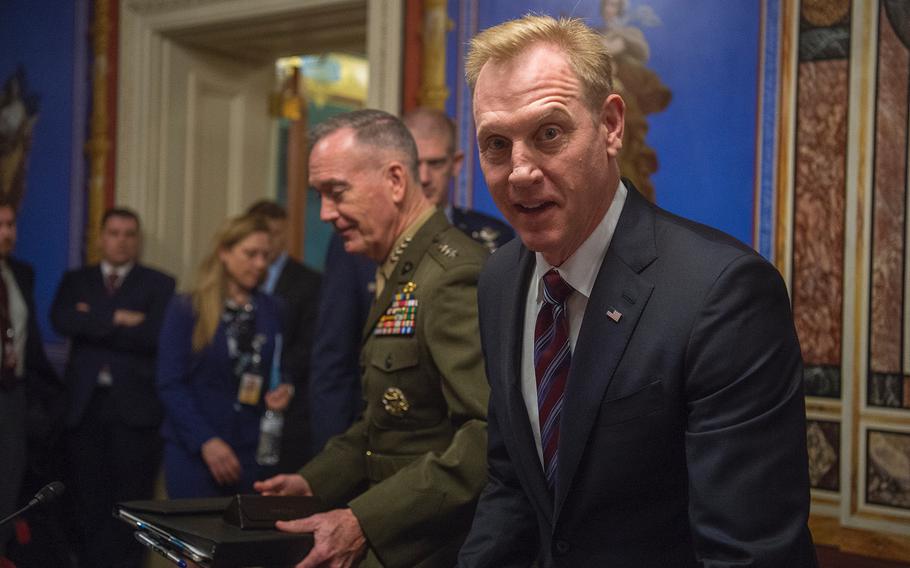 Buy Photo
Acting Defense Secretary Patrick Shanahan arrives for the start of a Senate Appropriations subcommittee hearing on Capitol Hill in Washington on Wednesday, May 8, 2019. Behind Shanahan is Chairman of the Joint Chiefs of Gen. Joseph Dunford. (Carlos Bongioanni/Stars and Stripes)

WASHINGTON — The Pentagon will shift $1.5 billion from its 2019 budget, with more than half coming from support for Afghan security forces and a military retirement system, to help construct the U.S.-Mexico border wall, defense officials said Friday.

The plans come nearly three months after President Donald Trump declared a national emergency to use roughly $6 billion in military funds and personnel to build a wall to curtail illegal immigration along the U.S. southern border.

“The Department of Defense is fully engaged in addressing the crisis on our southwest border, with more than 4,000 servicemembers and 19 aircraft currently supporting the Department of Homeland Security. Today, I authorized the transfer of $1.5 billion toward the construction of more than 80 miles of border barrier,” Acting Defense Secretary Pat Shanahan said Friday, a day after it was announced he would be nominated to hold the post permanently. “The funds were drawn from a variety of sources, including cost savings, programmatic changes and revised requirements, and therefore will have minimal impact on force readiness.”

In February, Trump said he planned to pull $3.6 billion from military construction funds and another $2.5 billion from the Defense Department’s drug interdiction program through an executive order. The funds are part of an overall plan to use $8 billion to build a southern border wall.

Friday’s move adds to another $1 billion already transferred from Army programs for wall construction and reaches the $2.5 billion in funds called for in the executive order.

The Pentagon said the funding would be used to replace fences on four projects near Tucson, Ariz., and El Centro, Texas.

Traditionally, the Pentagon conducts a midyear review in April to hunt down budget savings that can be moved to programs that need the money. Now, the Pentagon is redirecting funds to build the wall that would normally go to military accounts that might be running short, such as re-enlistment bonuses and health care, according to Mark Cancian, a senior adviser with the Washington think tank Center for Strategic and International Studies.

“During midyear reviews, you always find places where you have extra money and where you need additional money,” he said.

The plan to reallocate money was announced in February and remains controversial. Unlike Friday’s moves, Congress is usually involved in approving the reallocation of military funds, otherwise known as “reprogramming.”

“It would not be controversial except the money is going to the border wall instead of to the services,” Cancian said. “And the administration is doing it without congressional approval.”

And though May 10 marked the deadline for the Pentagon’s comptroller to compile a list of military construction projects also on the chopping block to create $3.6 billion in wall funding, Lt. Col. Joe Buccino, Shanahan’s spokesman, said Friday that the list of cuts were still pending.

“There’s going to be another round of this reprogramming controversy,” Cancian said. “They said they were going to do it May 10, so any moment we will see this other reprogramming.”

Buccino said a decision on the military construction list could be announced in the next two weeks.

Defense Department officials alerted Capitol Hill members to what programs will lose funding for the new $1.5 billion infusion for the wall, leading some of them to raise concerns. Ten senators, the Democratic members of the Senate Appropriations Committee subpanels on defense and military construction issues, slammed the move Friday in a letter to Shanahan.

“Once again, the Department of Defense has ignored decades of precedent and cooperation with the Congress in carrying out a transfer of funds without regard to any consultation with the Appropriations Committee,” reads the letter signed by Sens. Patrick Leahy of Vermont, Dick Durbin of Illinois, Jack Reed of Rhode Island, Brian Schatz of Hawaii, Tom Udall of New Mexico, Patty Murray of Washington, Chris Murphy of Connecticut, Tammy Baldwin of Wisconsin, Dianne Feinstein of California, and Jon Tester of Montana. “We are dismayed that the department has chosen to prioritize a political campaign promise over the disaster relief needs of our servicemembers, given the finite reprogramming authority available.”

The eight-page document sent to members of Congress, which was signed May 9 by Elaine McCusker, the Defense Department’s deputy undersecretary of defense and comptroller, said the $1.5 billion in funding would be pulled from a variety of military programs.

From the base budget, nearly $224 million has been yanked from savings related to a military retirement system and another $250 million was pulled from a program used to destroy a stockpile of military chemical agents stored at facilities in Kentucky and Colorado.

The Air Force also saw a hefty rash of cuts, totaling $344 million, including programs to upgrade the cockpits for certain aircraft and cruise missile defense. Of that, $209.7 million were drawn from funds for satellite programs.

From the war fund, more than $600 million has been be pulled from a program to support Afghan security forces, the largest amount in Friday’s reallocation. The program has been unpopular and targeted for cuts on Capitol Hill in the past, so it might have been an easy target, Cancian said. Friday’s reallocation pulls another $77.5 million from the Coalition Support Fund, which is used to pay for some expenses for coalition partners in Afghanistan.

At a Capitol Hill hearing earlier this week, Pentagon leaders defended ongoing Pentagon plans to support the construction of a U.S.-Mexico border wall.

Shanahan told lawmakers that there’s enough Pentagon contracts and funding from their budgets and other agencies in place to build more than 250 miles of new border fencing. That represents the construction of about 63 miles of border barriers during the next six months.

“We now have on contract sufficient funds to build about 256 miles of barrier,” he said.

Stars and Stripes reporter Caitlin Kenney contributed to this report