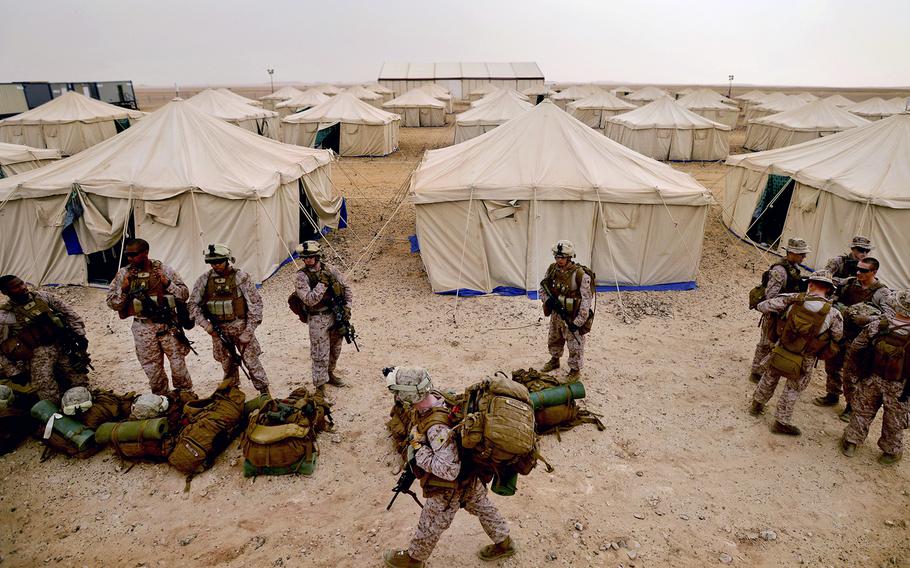 U.S. Marine Corps members assigned unload their gear near their living quarters after arriving at Camp Al-Galail, Qatar, for Exercise Eagle Resolve 2013, April 21, 2014. Qatar was recently removed from the imminent danger pay location list but troops deployed there will still qualify for R&R, according to a recent Pentagon decision. (Kenny Holston/U.S. Air Force)

WASHINGTON — Troops who deploy by the end of this month to nine Middle Eastern countries recently removed from the imminent danger pay location list will still qualify for R & R, according to a recent Pentagon decision.

Normally, servicemembers who don’t qualify for IDP don’t qualify for rest and recuperation leave either. But the policy was waived for troops deployed to land areas of Bahrain, Kuwait, Oman, Qatar, Saudi Arabia, United Arab Emirates, Kyrgyzstan, Tajikistan and Uzbekistan, according to a May 6 memo from Jessica Wright, acting undersecretary of defense for personnel and readiness.

The waiver applies “only for members whose deployment to a country listed above commenced before June 1, 2014,” Wright wrote.

In addition to those countries, the DOD in January removed 11 other places from a list of locations eligible for IDP, effective June 1: land areas of East Timor, Haiti, Liberia, Montenegro, Rwanda and Serbia; water areas of the Arabian Sea, Gulf of Aden, Gulf of Oman and the Red Sea; and water and airspace of the Persian Gulf.

The reclassification of those areas is expected to affect about 50,000 U.S. troops.

According to DOD policy, troops eligible for Rest and Recuperation leave are those deployed to areas eligible for imminent danger pay and where dependents and regular leave programs are restricted. Servicemembers are eligible for R & R leave once per 12-month deployment, and qualify again after 18 months of deployment.