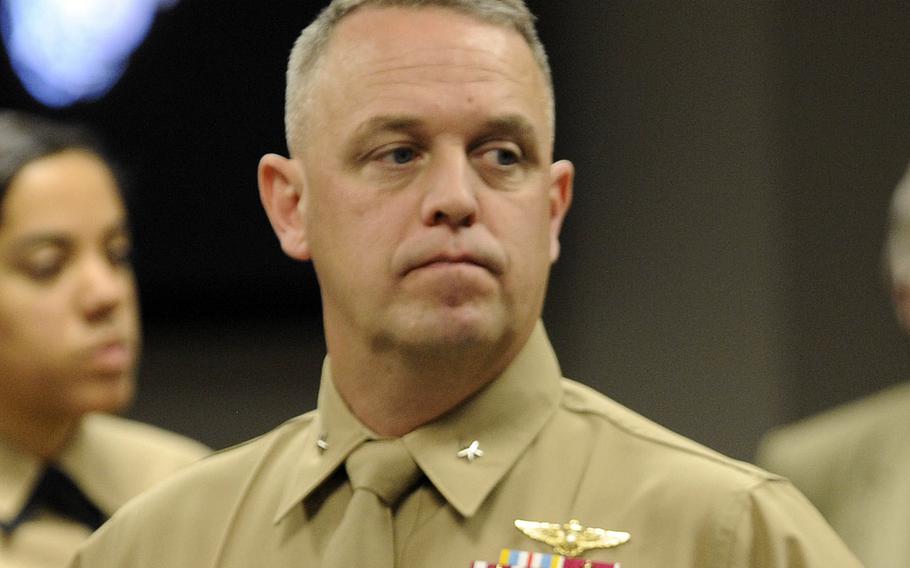 Brig. Gen. Kevin Killea attends a ceremony in Arlington, Va., in November 2013. Responding to reports of rebel fighters in Syria being captured, Killea said on Friday, July 31, 2015, that they "had nothing to do with the new Syrian fighters who were trained and equipped," by U.S. forces. (John F. Williams/U.S. Navy)

The Pentagon distanced itself Friday from a captured Syrian rebel leader who has been key to U.S. plans to shape a local ground-fighting force to combat the Islamic State.

Earlier this week, media outlets reported the capture of Col. Nadim al-Hassan, who helped provide recruits for the U.S. training program when it launched this year. According to reports, Hassan was captured by al-Qaida affiliate Nusra Front with six other rebels who were fighting near Aleppo as a unit called Division 30.

On Friday, the Pentagon drew a line between Hassan and the captured rebels, who are largely considered to be “U.S.-backed,” and 54 other Syrian moderate fighters who have gone through the official U.S. vetting and training program and are identified as the New Syrian Army.

News reports of Hassan’s capture “had nothing to do with the new Syrian fighters who were trained and equipped,” said U.S. Marine Corps Brig. Gen. Kevin Killea, chief of staff for Combined Joint Task Force-Operation Inherent Resolve. “We’ve had zero indication or information that there are any captured New Syrian Forces that we’ve trained.”

When asked what the U.S. responsibility would be if those forces were under attack or captured, Killea said, “All of the anti-[Islamic State] forces in Syria that are credible, reliable partners on the ground in the fight against [the Islamic State] will receive coalition support as is required.” The U.S. said earlier this week that it does not have a plan in place as to what type of rescue or protection it would provide if the U.S.-trained fighters come under attack.

The Pentagon’s plan to have 5,000 Syrian moderate fighters trained and equipped by the end of the year has faced significant challenges; only 54 are fully trained. Few of the thousands of potential recruits have successfully moved through the U.S. vetting system; and many of those who have been vetted have left the program.