Past deadline, feds see no end in sight for veteran homeless crisis 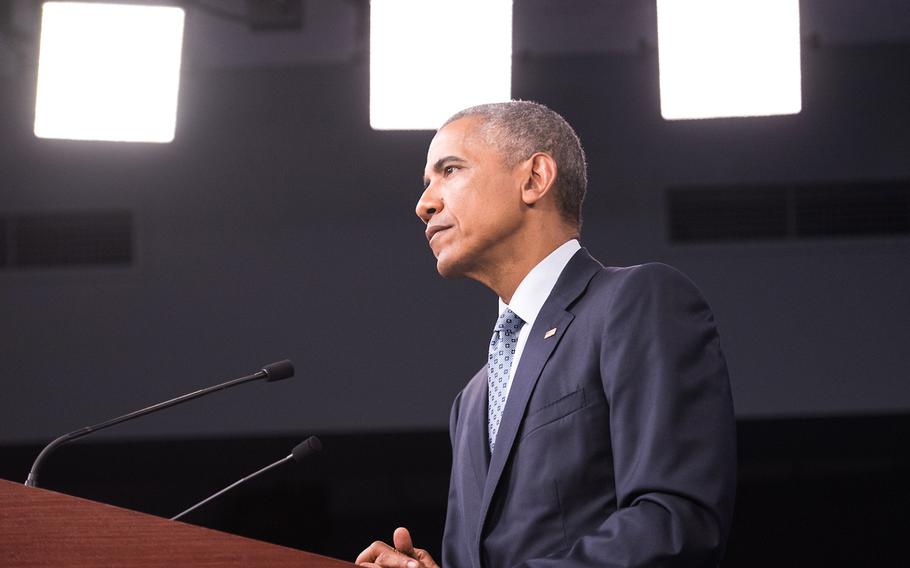 President Barack Obama listens to a reporter's question in the Pentagon Briefing Room on Thursday, August 4, 2016. (Corey Dickstein/Stars and Stripes)

President Barack Obama listens to a reporter's question in the Pentagon Briefing Room on Thursday, August 4, 2016. (Corey Dickstein/Stars and Stripes) 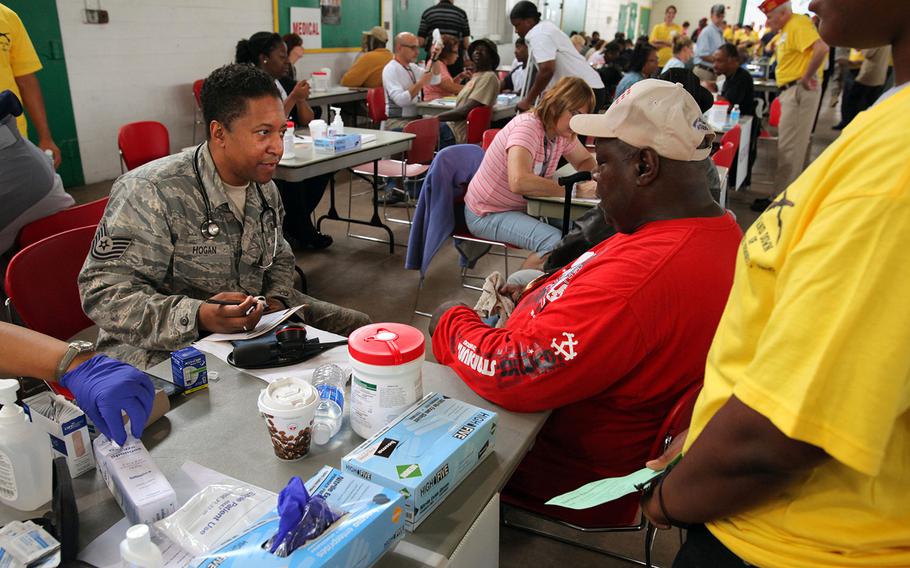 WASHINGTON — Federal agencies now say they cannot predict the end of homelessness among veterans, a national crisis that President Barack Obama hoped to stop by 2015.

Six years after Obama set his goal, he announced Aug. 1 that veteran homelessness in the country had decreased 47 percent since 2010.

“We knew that those were all going to be tough goals to achieve,” said Ann Oliva, deputy assistant secretary for special needs at the Department of Housing and Urban Development. “But we thought they were doable, and if we made the right policy decisions and had the right data and resources we needed, we could progress, which is what we did.”

Yet Oliva said she couldn’t give a date when homelessness for veterans across the country would end, though agencies attempt to put more resources toward the effort and more cities are meeting federally established benchmarks that show progress in housing homeless veterans.

Though the 2015 goal was missed, Randy Brown of the nonprofit National Coalition for Homeless Veterans said Obama attracted attention to the issue and created a sense of urgency behind the effort, which increased funding to record highs.

In most years since 2008, Congress has appropriated about $75 million toward a voucher program to house homeless veterans. However, lawmakers allocated $50 million in 2011 and $60 million in 2016.

HUD and the Department of Veterans Affairs, the two federal agencies most involved with battling the problem, recently announced funding for the first half of 2016 -- approximately $39 million that the agencies say has the potential to house about 5,300 veterans.

“When it was announced that the goal was to end veteran homelessness in five years, I think that was taken by everyone as, ‘Can we actually do that?’” Brown said. “But that goal and the serious efforts to put a plan behind it and put resources behind it changed the landscape from managing homelessness to actually ending homelessness.”

The latest point-in-time count, which are compiled every January, showed there were about 40,000 homeless veterans left to house, and 13,000 of those veterans live on the streets, according to VA and HUD estimates released Aug. 1.

Oliva said there are most likely more than 40,000, because the count didn’t include veterans who are newly homeless or veterans who have vouchers and can’t find housing.

A lack of affordable housing across the United States is one problem, Olivia said. But the agencies also “haven’t made as much progress as we would have liked,” she said, because more veterans are becoming homeless than was estimated when Obama announced the goal.

HUD estimates the number of veterans who are becoming homeless each year by gathering information from VA medical centers and homeless organizations. Oliva said the estimates were “steeped in internal modeling” and made using assumptions, and won’t be released publicly.

“We thought it was going to decrease over time,” she said. “That didn’t play out the way we thought it would.”

But the latest round of funding toward the effort was made just days after the city of Austin, Texas, announced it met the benchmarks to declare it had “effectively ended homelessness among veterans.” However, the designation comes with several conditions and doesn’t mean there are no homeless veterans left in Austin.

“Well, no, it doesn’t mean that. We’re going to have vets that find themselves in that position,” Austin Mayor Steve Adler said. “The way it’s defined is that you have removed the backlog for social services, such that we can identify homeless veterans and immediately start accessing those services.”

Communities declaring they have ended homelessness for veterans is based on a set of criteria that the U.S. Interagency Council on Homelessness established. The criteria aims at ensuring veteran homelessness is “brief, rare and non-recurring.”

Brown said the criteria should be thought of as minimum standards.

A key is being able to house veterans quickly. Communities must find veterans permanent housing within 90 days after they’re identified as homeless.

Also, the number of veterans in a community who found homes must be greater than the number becoming homeless. The benchmarks make exceptions for instances in which a veteran is offered housing, but refuses it.

Austin is the latest of about 30 cities and counties to meet the benchmarks. The first city to do so was New Orleans in early 2015.

Oliva said HUD is continuously reviewing data from other communities that think they have met the requirements.

“There needs to continue to be urgency to get these systems in place. That’s a new minimum accepted level of services,” Brown said. “And once they reach that level, it’s not a matter of, ‘OK, we’re done.’ They have to adjust to the needs of veterans in their communities.”

Adler said Austin housed 682 veterans in slightly more than two years and can house veterans within 90 days after they identify them. Now that the city achieved the certification, agencies will attempt to shorten that time, said Ann Howard, director of Austin-based Ending Community Homelessness Coalition.

“I know there are some veterans who are on a path to housing that are not yet housed,” she said. “That’s sort of the nature of the beast. We just keep going. We just keep housing them.”

The city is using 450 federal vouchers to house veterans, Howard said, equating to millions of dollars in federal funding. She said it was difficult to estimate the total amount Austin has received from the federal government because the ongoing costs of federal vouchers depend on whether the veteran has a family and where they’re living.

In June, HUD and VA said $38 million would be made available for vouchers and ongoing clinical and supportive services from the VA. On Monday, the agencies announced they would add nearly $1 million.

HUD gathers data on homeless veterans and determines which communities should receive vouchers, and how many.

The most recent statistics show 85,205 vouchers have been awarded and slightly more than 114,000 homeless veterans have been served through the program since 2008.

Of those permanently housed, 13 percent have dropped out of the program, Oliva said. What’s not tracked is whether those dropouts are caused by positive change – veterans finding housing without assistance – or not. HUD and the VA are working on a report that will identify the reasons people leave the assistance program, she said.

“Certainly we’re on the right path,” Oliva said of the overall effort. “We need continued bipartisan support on making sure our resources continue, and local support and political will to make it happen.”