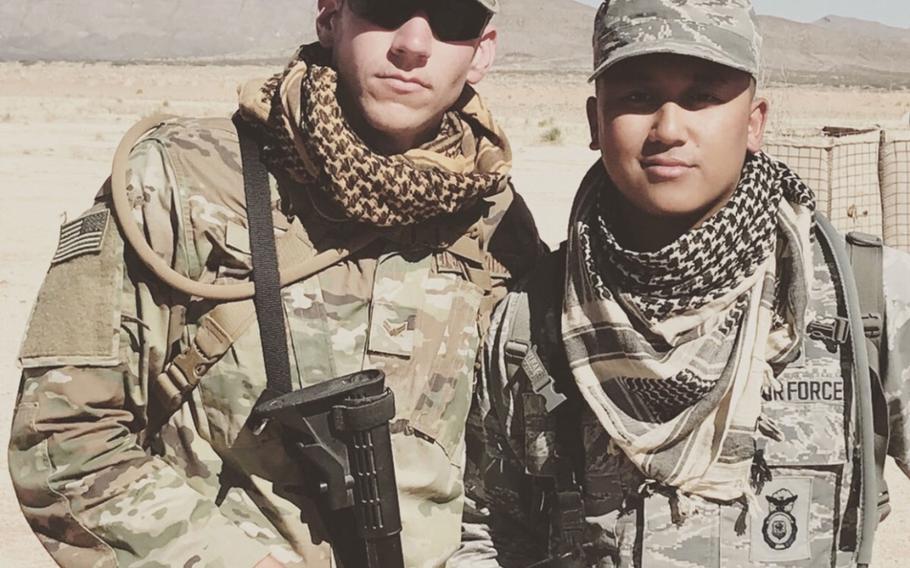 This photo was posted on a GoFundMe page for the family of Airman 1st Class Mikhahael Ragay (right), who suffered a severe heat injury during training at Osan Air Base, South Korea. (Courtesy of Logan Palmer)

A South Korea-based airman who collapsed during a ruck march is among thousands hospitalized from a heat wave that has claimed dozens of lives this month in the Far East.

A GoFundMe page seeking donations for the family of Airman 1st Class Mikhahael Ragay says that “during a ruck at Osan Air Base, South Korea, A1C Ragay fell out due to heat exhaustion/dehydration. His core body temperature was 108 degrees Fahrenheit and he is currently in critical condition in a comatose state. His family flew out to Osan to be with him, and all proceeds will go to his family to support them during this difficult time.”

Members of the 51st Security Forces Squadron participated in a ruck march at about 6 a.m. Saturday, said Staff Sgt. Tinese Jackson, a 51st Fighter Wing spokeswoman. The trek culminated an eight-day Combat Readiness Course, which is an initial training exercise for airmen new to the unit.

“A member of the 51st SFS passed out during the ruck march and was taken to the emergency room,” she said. “The Airman is currently being treated and recovering at an off-base hospital in the Republic of Korea.”

“The 51st Fighter Wing remains focused on the safety of all service members while maintaining readiness at Osan Air Base,” she added.

The temperature outside at the time of the ruck was approximately 77 degrees, Jackson said.

The Korean Meteorological Administration said temperatures reached a high of 97 degrees at Osan on Saturday and 99 degrees the next day.

Airman 1st Class Logan Palmer said he set up the GoFundMe page to help Ragay’s family, who traveled to Osan from Texas to be with him. An avid soccer player, Ragay grew up in Ramstein, Germany, where his father worked with the military, Palmer said.

More than 1,300 people have suffered heat illnesses this year, the Korea Centers for Disease Control and Prevention said in a statement issued this week. More than half of those happened in the week leading up to Ragay’s injury.

Heat illnesses were up 61 percent from last year, and there have been 14 heat-related deaths, including seven between July 15 and July 21, the agency said.

Korea is under the influence of the same high atmospheric pressure that has caused a heatwave in Japan, he added.

At Yokota Air Base — home of U.S. Forces Japan in western Tokyo — Monday’s temperatures reached a July record of 102 degrees. That day in the nearby city of Ome, the mercury hit 105 degrees, making it the second-hottest spot in the country after Kumagaya city, where temperatures soared to nearly 106 degrees — a new Japanese record — according to the Japan Meteorological Agency.