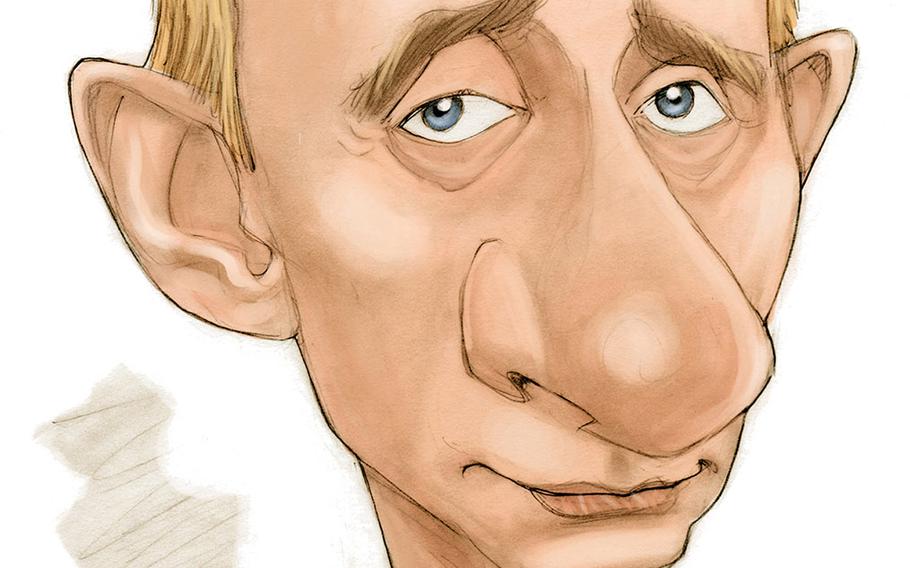 WASHINGTON — Admit it. You wish you were Vladimir Putin right now. Enemies fear him. Allies are grateful to him. Women are drawn to him. Jimmy Fallon imitates him. Even Edward Snowden wants to be his video buddy. To paraphrase that great geopolitical analyst Alicia Keys, this guy is on fire.

Oh sure, his country's economy is in the tank and sinking fast. But what's that to a man whose personal fortune is estimated in the billions? (That KGB pension plan rocks.)

Yes, Barack Obama thinks that Putin is hurting Russia with his Ukrainian antics. But the Russian people — the constituents who would be directly responsible for electing him president if anybody believed Russia were actually a democracy — are giving him approval ratings Obama would kill for. And the deal the West and the Russians cut with Ukraine this week to ease tensions seems likely to take relieve some of the East-West tensions, leaving Putin with much of what he wanted.

Of course, winning Crimea brings with it a ton of challenges given that the region is an economic basket case and building the infrastructure to connect it to Russia will cost billions of dollars. But not only was the annexation an emotional pick-me-up for a Motherland that has been down in the dumps for a generation, but it took little more than Putin raising one of his intimidating Bond-villain eyebrows to get it. And the penalties the finger-wagging West has imposed upon him hardly even qualify as "surgical" sanctions — they were more like pinpricks. (New ad slogan for the West: "The Atlantic Alliance — blazing new trails in foreign policy acupuncture.")

The list of Putin's recent triumphs is a long one. And it would be even longer, I suspect, if we knew every source of cash that was flowing into every secret bank account he has. (By that I mean allegedly has. Might have. If he were corruptly siphoning off vast amounts of his struggling nation's national patrimony.) But even so, it's a long list of wins. And there is every reason to assume that by the end of his current annus mirabilis it will be even longer.

Not only do we have the bloodless annexation of Crimea and the political boost at home associated with it, the guy's divorce went through — and according to reports he has been involved with a Russian rhythmic gymnast ever since. Then there was Sochi, which packs of wild dogs and plumbing problems aside, went pretty darn well for the host and Russian athletes.

Prior to all that, there was the deftly played Russian gambit to forestall America's attack on its Syrian ally and the gains in international clout associated with Russia's central role in the Iran nuclear negotiations. Even if Foreign Minister Sergei Lavrov can't always get his calls answered in the Kremlin, and even if some in the U.S. government have been known to call him "the slug" (which is probably not a compliment, even in Moscow), Russian diplomacy is more globally important today than it has been at any time in the past two decades.

And then of course, there was Snowden, whose fortuitous landing in Moscow offered Putin not simply just a way to tweak the West. It was a one-two punch: giving refuge to a man many see as a hero for revealing American surveillance abuses while at the same time almost certainly giving Moscow's intelligence agencies access to the treasure trove lurking in Snowden's hard-drives.

What's more, Putin's maneuvers have confounded and mesmerized his critics. Granted, some in the West call him irrational or worse, but the facts say crazy successful is more like it. Let them think it is irrational to systematically advance national and personal interests by identifying weaknesses and playing to strengths. In Putin's Kremlin they'll take that any day. (Just as world beaters everywhere always have done and always will do.)

What's more, the Russian president is clearly driving his American counterpart a little nuts — taunting Obama and testing his limits, while staying far enough away from core American interests to make direct, tough actions unpalatable. And pity poor Angela Merkel, who has been assigned the task of calling Putin regularly — in part because the relationship with the exasperated Obama is, in the words of one senior U.S. official, "exceedingly difficult" — trying to take a tough line while also trying to stave off a confrontation which would push the EU's fragile recovery into the ditch.

It seems like everyone, everywhere, has Vlad on the mind — and tell me that seemed a likely bet 10 years ago.

Worse, the best days are almost certainly ahead. With troops massed on Ukraine's border — and spies and special forces stirring up unrest inside the country — the most likely outcome isn't an invasion but rather not needing one for Russia to achieve its goals. The recently announced diplomatic deal — while probably good for all parties — may well help advance this Russian goal. When Ukraine starts to redraft its constitution, it is likely to embrace the looser, federalist system that Putin wanted all along. This will give autonomy to the eastern regions, allowing them to drift closer to Moscow and further from Kiev.

But a political victory in Ukraine might not even turn out to be the most striking victory this year for Vladpolitik — which is the blunt application of toughness in the face of an uncertain, divided ally. As shocking and bald-faced as was the aggression in Crimea, it is nothing compared to the gut-punch that will be Bashar Assad's victory in Syria.

Here is a mass murderer, a man who has used chemical weapons against his own people (among the least of his crimes in terms of its human toll) who seemed destined for the dustbin of history along with Mubarak and Ben Ali — but who now has the upper hand in his country's devastating civil war. Barack Obama long ago called for Assad to leave office. That now seems very unlikely. And Putin, who coldly calculated that Assad represented the best bulwark against Islamist extremism, has led the international defense of this war criminal. Barring a major reversal on the ground, his resoluteness (and that of Assad and his Iranian supporters) will produce a victory over a fractious moderate opposition that America and the West have tepidly and inadequately supported.

That the United States will quickly seek to restore working relations with the Russians to seek their cooperation on the Iran deal the Obama administration needs will only add to the sense of Putin's strength.

Admittedly, no good thing lasts forever. Sooner or later, Putin will likely see his historic run end. After all, as he himself keenly remembers, he may have won South Ossetia and Abkhazia in 2008, but he sent the rest of Georgia headlong into the arms of the EU as a consequence.

Surely, Ukraine's western regions will want more protection, as will other countries in Eastern Europe. This will almost certainly lead to new ties — not only to the EU but to a NATO that will finally begin to reassess and modernize its mission. Nothing awakes an alliance like an enemy. Europe will begin in earnest a search to reduce its dependency on Russian energy. This will likely not hurt Russia as much as some suggest: there will be plenty of partners — like the Chinese — who will be happy to buy what the Europeans won't. But Russia's leverage in Europe is sure to decline in the long run as a result of these recent moves.

None of this bodes well for Russia's economy. Nor will any of Putin's posturing reverse the country's demographic problems. Indeed, Putin's heavy-handedness might well increase the likelihood of further tension in its "near abroad," not least with long-simmering, autonomy-seeking Muslim communities. And those photo ops at international summits are likely to be chilly for years to come. (But then, they always kind of were, weren't they? Putin, like Obama, has never really been a hugger with a flair for the too-long embrace of predecessors like Yeltsin or Clinton.)

Perhaps, someday, Putin's very good year will seem like one of short-lived triumphs. Indeed, this all seems likely to lead in an unhappy direction for Russia. But even then, Vlad will still have those (alleged) billions — and there's probably a lot to be gained from a little personal instruction in rhythmic gymnastics.

Rothkopf is CEO and editor of the FP Group. His most recent book is "Running the World: The Inside Story of the National Security Council and the Architects of American Power."