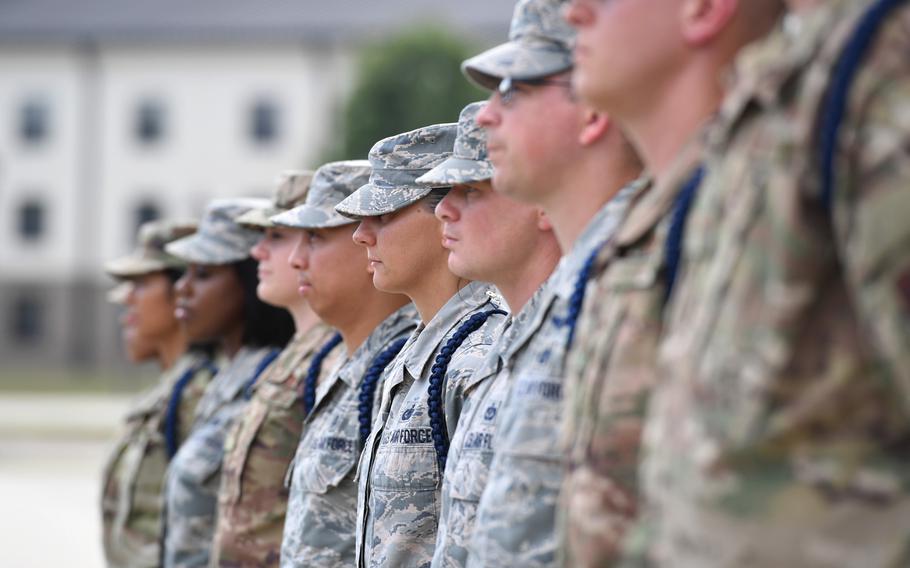 Airmen stand in formation during a Military Training Leader course graduation ceremony at the Levitow Training Support Facility on Keesler Air Force Base, Miss., May 30, 2019. The Air Force has shortened the length of tours for military training instructors from four years to three. (Kemberly Groue/U.S. Air Force)

On a stroll through our nation’s capital, it’s surprising how few military uniforms you see.

It isn’t that military members aren’t present in Washington — look closely and you’ll see tight haircuts, civilian wear stamped with military insignias, and the distinct command presence that all service members exude. But despite this, many service members forgo wearing their uniforms in public — a decision that can unintentionally harm society’s perception of military personnel and increase the gap between military and civilian life.

I first noticed the absence of military uniforms while working as a Reserve officer in Washington. Many of my fellow service members commuted in civilian attire and changed into their uniforms at work. At first, I thought this was driven by what military personnel call “force protection” — basic measures to lower your visibility and reduce threats. It wasn’t until I discussed the issue with my colleagues that I came to a surprising, much simpler conclusion: Military members aren’t avoiding their uniforms due to risks; they do it because they’re simply more comfortable operating in civilian clothes.

To anyone who has ever encountered the hassles associated with being in uniform in public, this immediately resonates. The uniform attracts attention, both good and bad. We’re regularly thanked for our service, which is appreciated by some, but for others makes for awkward or uncomfortable encounters. It’s not always clear what intentions people have. But assuming the uniform means assuming the responsibility of polite and respectful engagement with fellow citizens, regardless of the circumstances.

When we’re in uniform, we represent more than just ourselves. We represent our fellow veterans, our services and the U.S. government itself. This is a part of military culture, and it constrains our behavior in public. Personnel are instilled with the need to maintain a “military bearing” — the ineffable presence that a service member should carry at all times. It is a mix of confidence, pride, strength, dignity and deference. Using your cellphone while walking is forbidden, as are public displays of affection. We should stand up straight, have no overt emotional displays; we shouldn’t yawn or slouch.

These challenges have always existed, but cellphones and social media compound the problem. Today, normal occurrences can go viral, and service members don’t have the luxury of letting their guard down. Even small infractions, when in uniform, can have a big impact. A uniform slightly out of regulation or an inadvertent nudge on a subway platform can wind up on social media for the wrong reasons. Consequences can follow. Given all of this, many service members simply don’t wear their uniforms if they don’t need to. And that’s unfortunate.

The military is an increasingly alien organization to a growing number of Americans. Though it’s highly regarded by the public, it is increasingly populated by personnel from only a handful of states who often enter it following family tradition. Many Americans don’t know a single person in the military today, a drastic departure from generations past.

Earlier this year, acting undersecretary of defense for personnel and readiness Anthony M. Kurta noted the civilian-military disconnect, saying that civilians’ grasp of the military is often “characterized by misperceptions, a lack of knowledge and an inability to identify with those who serve.” This divide hurts recruitment efforts and leaves the public estranged with military engagements throughout the globe. Both the military, and the public they serve, are worse off as a result.

Military personnel and veterans inhabit a lofty place in American society. We know how to carry burdens. We should embrace the responsibility of being in public in uniform despite the difficulties. It’s a worthwhile cost to bear so that our communities can know who we are, and that we’re more than just a uniform — we’re your friends, neighbors, fellow citizens. Understanding the military’s place in our national life means seeing and knowing the service members who serve in it every day.

At the same time, the public should be aware of the distinct challenges that military members face. Most personnel feel uncertain about garnering attention from our uniforms, even if it’s positive. We have created a culture where those who fight in wars hide in our own streets. There was a time when military members hid their service for fear of being attacked or spit on, but those days are gone. Today, to honor those who came before us and bridge the divide between those who serve and those who don’t, we should proudly wear the uniform.

David Max Korzen is a veteran of the wars in Iraq and Afghanistan. He is a member of the Defense Council at the Truman National Security Project and continues to serve as an officer in the Air Force Reserve.