Religious tolerance should require no accommodation in the military 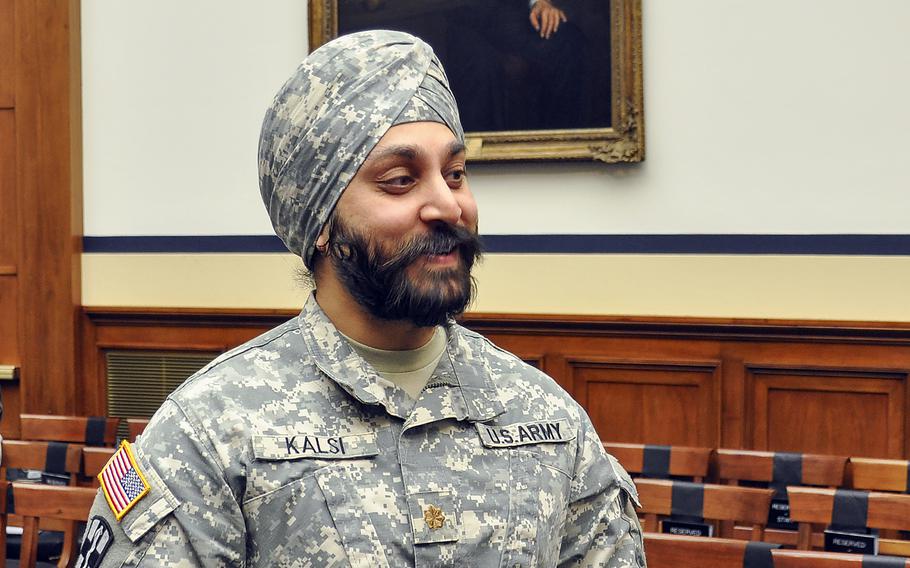 Army Reserve Maj. Kamal S. Kalsi attends a hearing on a Defense Department directive that provides guidance on uniforms and grooming with respect to religious beliefs at a House Armed Services Committee personnel subcommittee on Capitol Hill on Jan. 29, 2014. (Carlos Bongioanni/Stars and Stripes)

This week I joined millions of Americans in honoring and remembering those who have proudly served our nation. As one of just three turbaned Sikh Americans in the U.S. military, it is also an opportunity to reflect on how tough the struggle remains for some to serve our nation.

My parents immigrated to New Jersey from India when I was 2 and remained committed to the core Sikh values of education and hard work. They decided that we were going to assimilate as Americans, but that didn’t mean compromising our faith or traditions. We celebrated 4th of July and Christmas, alongside Vaisakhi and Diwali. I learned Punjabi from my parents, English from “Sesame Street” and Hindi from Bollywood. I was taught to never be ashamed of my Indian-American upbringing, or the color of my skin, and because of that I have never felt that I needed to betray my roots. As I matured, I learned that diversity is a core American principle, and that nearly all Americans can trace their roots back to some foreign soil.

My parents, like so many, struggled to provide me with an education. I followed in the footsteps of my forefathers and signed up with an Army recruiter who visited my college. On my first day of basic training, a sergeant major I served with said it best: “The Army comes in many shades of green.”

I was granted a rare accommodation by the Army that allows me to keep my religiously mandated turban and beard. It was the first religious accommodation of its kind in nearly a generation, despite the fact that more than 180,000 Sikh soldiers were either killed or wounded serving in the trenches during both World Wars. Sikh soldiers went on to serve in Korea and Vietnam, before the prohibitive ban was put into place in 1981. Throughout U.S. history, the Sikh faith, turbans and beards were never an impediment to sacrificing for our nation through military service.

In 2011, I went to Afghanistan in support of Operation Enduring Freedom. We were on the front lines of war and took care of thousands of sick and wounded casualties. My military family saw me as just another patriotic soldier trying to do the best job he could for both God and country. Neither my patients, nor fellow soldiers, ever took issue with my turban or beard.

The current guidelines will not permit religious accommodations unless the soldier is already in the military, and Sikh Americans cannot join unless they first meet all uniform requirements. Whether it was intentional or not, the Catch-22 leaves Sikhs with the choice of abandoning their religion or abandoning service to our nation. The current system is turning away qualified young patriotic Sikhs.

This week, 27 U.S. generals signed a letter demanding that the Pentagon end the ban that bars devout American Sikhs from serving in our military. Last year, letters supporting the right of American Sikhs to serve freely were also signed by 105 members of the U.S. House of Representatives, 15 U.S. senators and 20 national interfaith and civil rights organizations.

These demands make it clear that the current ban on Sikh articles of faith is un-American. But nobody is asking for special privileges. No Sikh should be exempt from any of the safety or training requirements. But if a soldier can get through boot camp, get a good seal with a gas mask and prove that he or she can do the job, just like the countless Sikh soldiers who have served for generations, then he or she should be granted the basic right to serve. Currently, Sikhs are being asked to violate the same faith that has made us such great warriors over the centuries. It is an unfair choice, and it’s one that no American should ever have to face.

Our turbans and military heritage represent our identity as well as our commitment to social justice. Patriotic Sikh Americans continue to be targets for hate crimes, bullying and job discrimination at rampant rates. The best way for our country to push back against this prejudice is through service, sacrifice and education. That responsibility should start with the military changing this outdated policy of exclusion.

Throughout history, diversity has served as a strategic advantage. What makes us uniform are the ideals we fight for: democracy, freedom and equality. This is what’s right for Sikhs who are looking to serve and it is what’s best for a nation that values and protects pluralism.

Maj. Kamal S. Kalsi is in the U.S. Army Reserve, and has served in the military since 2001. He is currently the medical officer for the 404th Civil Affairs Battalion in Fort Dix, N.J., and serves as EMS medical director to St. Clare’s Health System in New Jersey.