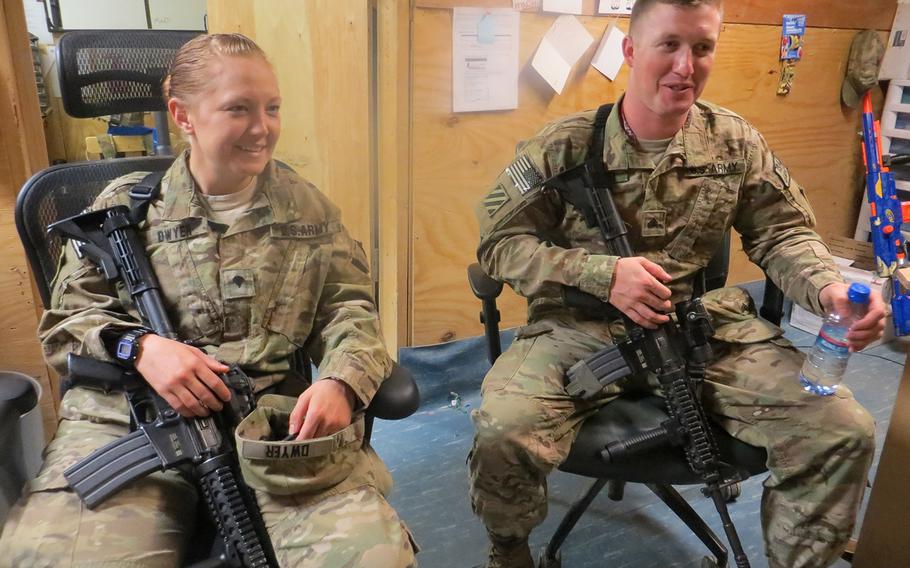 Buy Photo
Married couple Spc. Amanda Dwyer and Sgt. Jonathan Dwyer, with the Special Troops Battalion, 4th Brigade Combat Team, spent more than half their 12 months together at Forward Operating Base Shank in eastern Afghanistan in 2013. (Martin Kuz/Special to Stars and Stripes)

Many of the 40,000 dual-service couples in the military — members married to other servicemembers — have for years drawn combined housing allowances stateside that more than cover their rent and utility costs.

The philosophy has been that Basic Allowance for Housing (BAH) is a key element of military compensation needed to keep pace with civilian worker salaries, so it should not be reduced or eliminated based on what dual-service couples actually pay for housing.

The Senate Armed Services Committee has inserted language in its version of the fiscal 2016 defense authorization bill that takes a different view. It seeks to end what some lawmakers perceive as an income windfall for dual-service couples by linking BAH payments to what these families actually pay to rent housing at new and future assignments.

If the full Senate and, later this summer, the full House were to agree to this change, it would be a dramatic compensation cut for dual-service families whose total numbers have grown over the last several years with military recognition of gay and lesbian marital status.

The Senate bill, in both circumstances, would allow only the higher-ranking member in dual-service marriage to draw any BAH, though at the higher with-dependents rate. The other member would be ineligible for BAH.

To prevent couples from circumventing this proposed change in law by living in separate residences while assigned to the same area, the Senate committee would direct that the new BAH limit apply to couples “who are assigned within normal commuting distance from each other.”

For any stateside area, the proposal would be a more significant cut for officers than for enlisted, and deeper for all ranks in higher cost housing areas of the country such as San Diego, Calif., or Washington, D.C.

Other language in the Senate bill would curb BAH for servicemembers who reside together to save on their housing costs. E-4 servicemembers and higher who live together would see their BAH capped at 75 percent of “their otherwise prevailing rate” for their pay grade or at the E-4 “without dependents” rate, whichever is greater.

Both dual-service couples and members living together would see the described BAH reductions for the first time only after they move from current assignments. As the committee explains in its report on the defense bill, current BAH levels would be protected “so long as they maintain uninterrupted eligibility to receive BAH within a particular housing area.”

The proposed BAH changes originated inside the Senate Armed Services Committee chaired by Sen. John McCain (R-Ariz.) and its personnel subcommittee led by Sen. Lindsey Graham (R-S.C.). These cuts weren’t part of the Obama administration’s plan to curb spending on BAH, which has grown dramatically since 2001 to exceed $1 billion annually.

As reported here last week, the Senate bill also supports the administration’s call to dampen BAH annual adjustments over the next several years until BAH recipients are paying five percent of rent and utility costs out of pocket.

The House-passed defense authorization bill takes no action to curb BAH rates. So assuming the Senate committee’s BAH initiatives survive floor debate next month and clear the full Senate, their fate would be decided by a House-Senate conference committee tasked to reconcile any differences.

Retirement choice forecastBoth the House and Senate defense authorization bills promise to make sweeping changes to military retirement for future generations of servicemembers. They also promise to help current members understand the new plan well enough to decide within a year whether to opt into its more modern features, including a portable 401(k)-like Thrift Savings Plan, or to stay under the current more rigid plan that offers careerists a 20-percent more valuable “defined benefit” for serving at least 20 years.

Though the current force will have time and a lot more information on which to base their decisions, the Congressional Budget Office must predict now how current members will decide in order to give members of Congress a good estimate of costs and savings from enacting the new plan.

CBO has already made a projection for the House-passed plan. It projects that no member with 12 or more years of service will switch to the new plan given their ineligibility for a key feature: a lump-sum continuation pay at the 12-year mark in return for a promise to serve at least four more years.

CBO says 100 percent of members with less than two years’ service will switch to the new plan to gain access to its Thrift Savings Plan with government matching of member contributions up to 5 percent of basic pay.

Likewise, continuation pay for reserve component members should be set at one month’s basic pay for enlisted and six months for officers, which using current pay scales would be almost $3,600 and $42,000 respectively.