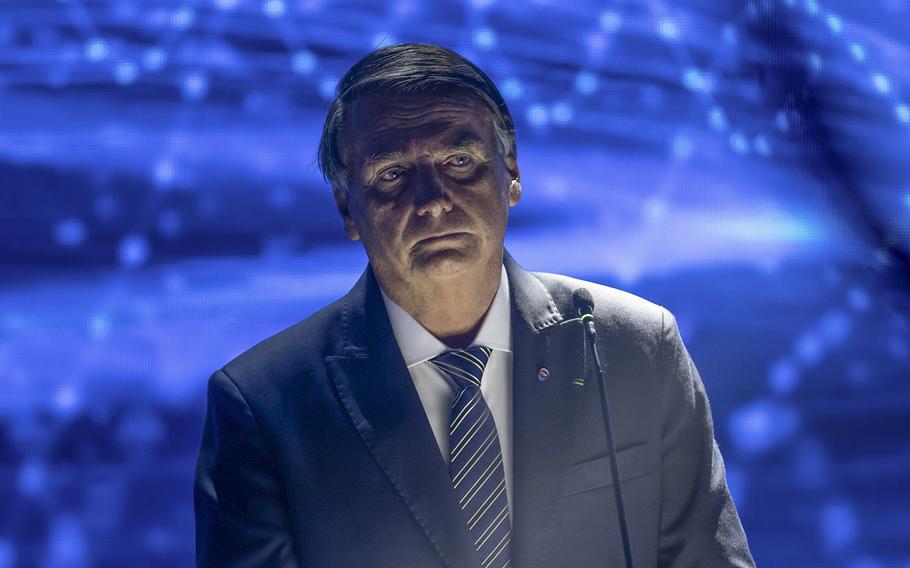 Whether cocking finger pistols, vowing to put a rifle in every home or working to gut arms controls, Brazilian President Jair Bolsonaro has spent his entire 33-year political career aspiring to be his country’s top gun.

“I want everyone armed,” he berated his Cabinet in a 2020 meeting that turned into a viral video. Plagiarizing the National Rifle Association, he added that “a people armed will never be enslaved.”

This is not just political theater. Bolsonaro’s call to arms threatens Brazilian security, civic concord and perhaps democracy itself. The stakes are particularly high now, in the rancorous run-up to the Oct. 2 presidential elections, the most sharply contested since military rule ended 37 years ago. That Bolsonaro, a cashiered army captain who swoons for men in epaulets, takes every opportunity to extol his country’s 21-year military dictatorship only heightens the concerns.

Bolsonaro has militarized the government, packing his Cabinet with more former and active brass than any leader since the dictators were in charge. He deployed troops, tanks and fighter planes to celebrate Brazil’s independence day, as if it were a martial victory. (It wasn’t.) By evangelizing assault rifles and handguns, he also seems bent on militarizing the future. This is grim news for a country that clocks more than 40,000 murders a year, most of them gun-related.

Research by the Igarapé Institute think tank and other civil society organizations shows just how pervasive the cult of guns has become. Hastened by some 40 presidential pro-gun decrees and norms, the number of civilian-owned small arms nearly tripled from 2018 to 2021, Igarapé found. By July, Brazil’s total cache of privately owned arms in circulation had reached 1.9 million, according to Freedom of Information filings. These include weapons in the hands of presumably well-intentioned civilians genuinely concerned for their safety, but also many with owners who intone the official cant that good guys with guns are the answer to crime.

Bolstering that conceit is declining trust in the police and the paucity of rule of law in Brazil’s crime hot spots. Perhaps nowhere are these failings more conspicuous than in the Amazon, which has become a new frontier for the Brazilian arms race.

If arming well-meaning citizens were the solution to criminal violence, the region — where total registered arms more than doubled just from December 2018 to November 2021 — should be a haven of lawfulness and security. Instead, a host of scourges — more guns, metastasizing criminal networks and faulty governance — has turned the world’s largest tropical forest into a killing field.

Nowhere in Brazil has the rate of lethal gun violence increased so sharply, rising 78% in Amazonian states from 2010 to 2019, even as it dropped by 10% in the rest of the country. according to Igarapé’s review of Ministry of Health data.

The Amazon’s surge in gun-related homicides is just one indication Bolsonaro and his following are missing the mark. Even with more citizens carrying than ever, polls show that Brazilians are feeling no safer. Fewer than a third of Brazilians canvassed by national pollster Quaest said they would buy a gun if given the option. Nearly 7 in 10 said that they feared being near people with weapons and that wider gun access means putting young people in danger.

No matter. The Bolsonaro mission to spread weapons, lower the age for gun permits and limit oversight has only energized his gun-toting base. It would be folly to dismiss his bully talk as bluster.

If he loses the election to former President Luiz Inácio Lula da Silva (as voter polls suggest he will), don’t wait for Bolsonaro to go down shooting, or for the armed forces to stage a coup. After four years of feckless governance and disastrous pandemic management, neither the president nor military has the cachet to pull off such a stunt.

But Bolsonaro has also given no sign that he would, if defeated, contain indignant loyalists. On the contrary, Donald Trump’s most devoted Latin American disciple has relentlessly emboldened his boosters to distrust the polls and decry the electoral system while making sure they’re packing heat.

Even if a tropical version of the United States’ Jan. 6, 2021, insurrection is unlikely, there are risks ahead. Whoever wins Brazil’s election will govern a country facing not just food inflation, deepening poverty and hunger, and a fiscal sinkhole, but also one poisoned by partisan choler and — more than ever — armed to the teeth.

Mac Margolis, a Global Opinions contributing columnist and an adviser to the Brazil-based think tank Igarapé Institute, is the author of “Last New World: The Conquest of the Amazon Frontier.” Robert Muggah is co-founder of the Igarapé Institute.