The West is right to deny Russia a ‘sphere of influence’ 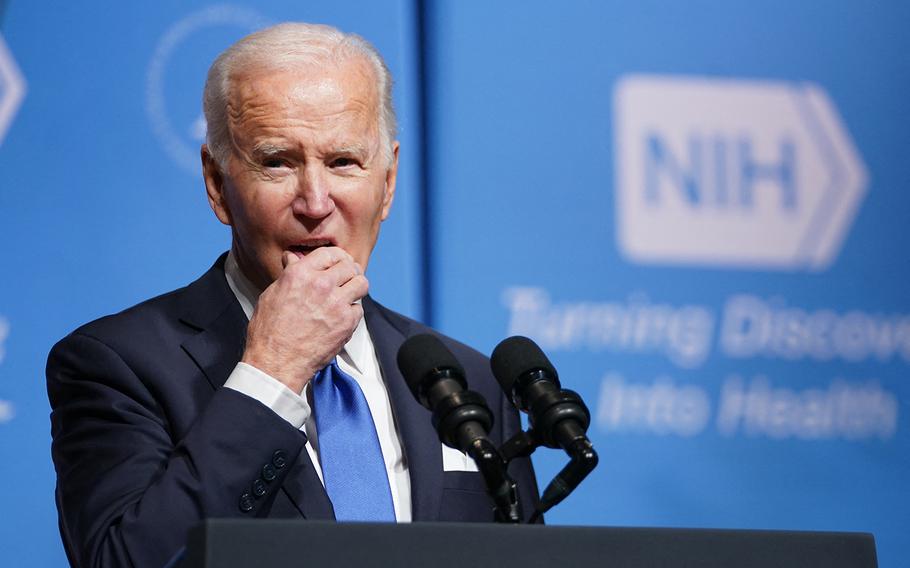 President Joe Biden speaks about the administrations response to Covid-19 and the omicron variant at the National Institutes of Health (NIH) in Bethesda, Maryland on Dec. 2, 2021. (Mandel Ngan, AFP via Getty Images/TNS)

INFLUENCE-COMMENT 909 words The West is right to deny Russia a ‘sphere of influence’ We’ve been here countless times in history. Once again, diplomats representing great and antagonistic powers are meeting to decide the fate of nations not even sitting at the table. Some are hoping to prevent war. Others are betting that war, or the threat of it, is a fair price to secure their country’s “sphere of influence.”

Such a sphere - a geopolitical zone of control to the exclusion of rivals - is what Russian President Vladimir Putin yet again demanded in two draft treaties he published last month: One was addressed to the U.S., the other to NATO. Together these amount to blackmailing the entire “West” and mocking whatever remains of the rules-based international order. Grant me my fief, he’s saying, or I attack.

Putin wants commitments that NATO will never, ever, admit Ukraine or any other country in the region as a member, no matter what the nation in question prefers. And he demands that the alliance in effect demilitarize countries already in NATO that used to belong to the Soviet Union, such as Estonia or Latvia, and others. Forgive the play on a famous quote, but Putin is looking at Eastern Europe and wants the West out, the Russians in, and the Ukrainians down.

If that mentality sounds understandable to some pundits, it’s because for most of history it was the default. As Thucydides described, competing spheres of influence drove Athens and Sparta into their 27-year clash. Later rivalries started the Punic Wars between Carthage and Rome (initially over the island of Sicily), and many other conflicts down the ages.

Viewed from Moscow or Beijing, the countries that today think of themselves as the West are therefore being hypocritical, because they were the ones to elevate this approach to world politics into an art form.

Early U.S. foreign policy was based on the Monroe Doctrine, which told the European powers to stay out of the “new world” because that was America’s hemisphere. The European powers in turn merrily carved up all of Africa and much of Asia. The first treaties explicitly referring to “spheres of influence” were signed between the U.K. and Germany when they divvied up the Gulf of Guinea in the 1880s.

In the 20th century, the habit turned diabolical. In 1939, Nazi Germany and the Soviet Union, in the secret Molotov-Ribbentrop Pact, carved up Eastern Europe between them. Their victims: Finland, Estonia and Latvia (assigned to Joseph Stalin’s sphere), Lithuania (initially in Adolf Hitler’s), Poland (shared between the two), and so forth. Many of these nations are once again growing anxious.

During the Cold War, the entire globe was in effect divided into only two spheres of influence. But simultaneously, a project was born that eventually became the European Union. This new confederation, built on the ruins of the old Europe, defined itself as a rebuke to the odious power politics of yore. Like idealists throughout the ages, these Europeans dreamed of an order in which the large (like Germany or France) cannot dominate the small (like Luxembourg or Malta), and where authority derives from rules rather than brute force.

After the Cold War ended, the Americans, too, espoused that aspiration. “Power is defined not by spheres of influence ... or the strong imposing their will on the weak,” said former U.S. Secretary of State Condoleezza Rice. Even post-Soviet, pre-Putin Moscow appeared to subscribe to the ideal. NATO and Russia seek “a common space of security and stability, without dividing lines or spheres of influence limiting the sovereignty of any state,” reads a joint declaration of the two from 1997.

In retrospect, those words have the ring of a more innocent era, or of naivete. Scholars of international relations today think that Americans, Europeans and others at best imagined that spheres-of-influence thinking could be overcome. In reality, for a brief moment in history, there was only one sphere, and it was American. Any order based on rules, goes the thinking, needs policing by a so-called hegemon. Take away this hegemony - a Pax Romana, Pax Britannica or Pax Americana - and international relations will turn atavistic.This logic offers one explanation for the recent return of spheres-of-influence diplomacy and saber-rattling. The relative might of America is declining, just as China is rising in Asia and Russia, Turkey and other powers are growing irredentist in their neighborhoods. Meanwhile, the EU is discovering that, unbacked by American hegemony, its lofty ideals confer no hard power to speak of.

The coming weeks, months and years will tell whether the world is headed into another era of realpolitik and might-makes-right - whether we are destined to return to the amoral and cynical approach to international relations that reduces small countries to pawns on the chessboards of the great powers.

Is the South China Sea worth dying for if China tries to seize it? What about Ukraine, Moldova, or Estonia, if Putin wants to dominate them? The great powers of the West may yet decide to let them go. But they should be under no illusion what kind of world they’d be giving up - and what sort they’d get instead.

Andreas Kluth is a columnist for Bloomberg Opinion. He was previously editor in chief of Handelsblatt Global and a writer for the Economist. He’s the author of “Hannibal and Me.”