Okinawa’s Hacksaw Ridge, once the site of bloody battle, now a peaceful place to recall acts of valor 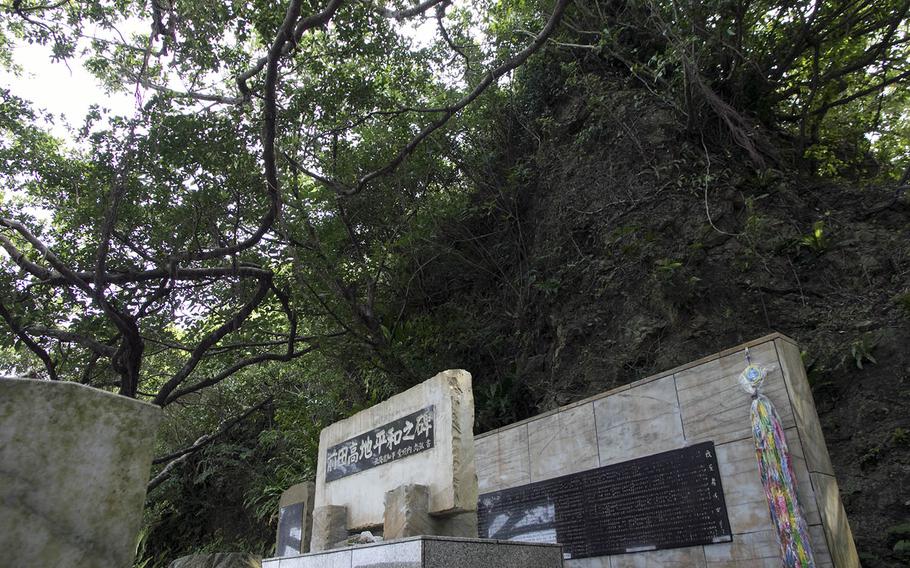 The Maeda Escarpment Peace Monument - erected to honor the war dead from Japan's 2nd Battalion, 32nd Regiment - is believed to be near the point where Desmond Doss lowered 75 wounded soldiers to safety. (Matthew M. Burke/Stars and Stripes)

The thing that stands out about Okinawa’s idyllic Maeda Escarpment today is its peacefulness.

As if these stunning natural features were not enough, the escarpment is a wonder for a totally unrelated reason. It is known by another name that commands reverence: Hacksaw Ridge.

Hacksaw Ridge — as the name implies — was the site of some of the bloodiest fighting during the Battle of Okinawa 74 years ago. It was immortalized in the 2016 film of the same name directed by Mel Gibson. The film depicts the heroics of then 26-year-old Army Pfc. Desmond Doss, a Seventh Day Adventist from Lynchburg, Va., who received the Medal of Honor for his actions under fire there.

Like many former World War II battle sites, time and nature have swallowed the carnage and muted the cries of the wounded and dying. Yet just below the surface, the ghosts remain.

American forces began landing at Chatan and Yomitan on April 1, 1945, according to battle histories on the Urasoe and Naha city websites. They began moving south toward the Japanese military headquarters at Shuri Castle. 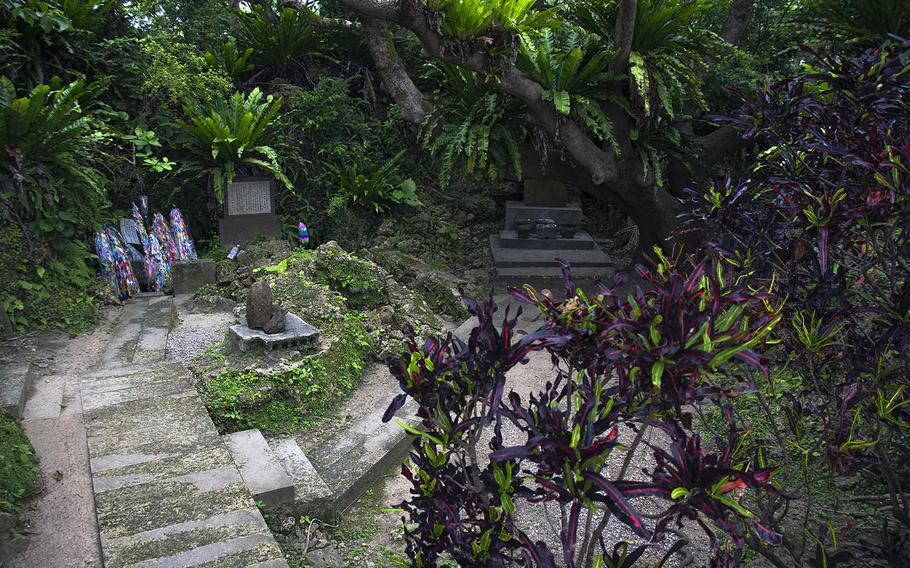 Paper cranes hang at a memorial marking an entrance to the Japanese cave positions atop Hacksaw Ridge on April 3, 2019. (Carlos M. Vazquez II/Stars and Stripes)

They had to fight their way through Kakazu Ridge and Hacksaw Ridge as the island’s Japanese defenders had taken the high ground to try and repel the invading Americans.

Hacksaw Ridge is a hilled area above the ruins of Urasoe Castle. Totally destroyed during the fighting, the distinct castle walls and tombs of Ryukyu kings Eiso and Shonei have since been rebuilt.

The ridge was a logistical nightmare for both sides. It was inaccessible to American tanks and had to be climbed and taken by soldiers from the 307th Infantry Regiment, 77th Infantry Division.

For the Japanese, the ridge’s steep cliffs and narrow approaches didn’t allow for machine gun nests to fire down upon the Americans as they approached, the Urasoe city website said. The Japanese had to repel them once they summited the plateau, which the Japanese transformed into a kill zone. 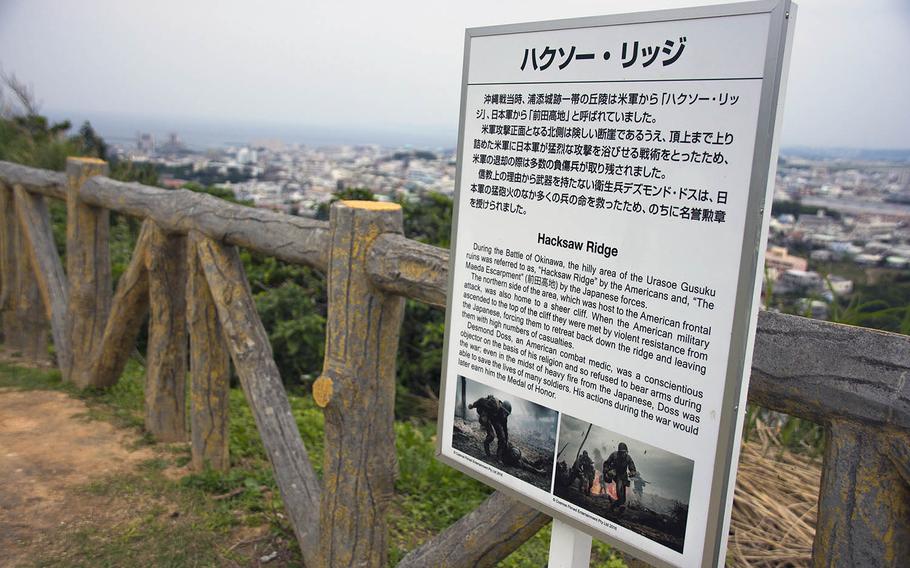 The view of Urasoe city from atop Hacksaw Ridge on April 3, 2019. (Carlos M. Vazquez II/Stars and Stripes)

Doss arrived as a medic attached to Company B, 1st Battalion, according to the book “Okinawa: The Last Battle,” by Roy Appleman, James Burns, Russell Gugeler and John Stevens. As a pacifist, Doss had been threatened and harassed by his comrades for refusing to carry a weapon in combat or kill an enemy soldier.

By the time Doss got to Okinawa, he had already served with distinction on Guam and in the Philippines, according to his Washington Post obituary from 2006.

Doss’ Company B approached Hacksaw Ridge in late April 1945, the book said. They aimed for Needle Rock, a nearly 43-foot rock at the east end of the hill.

Company A mounted four 50-foot ladders, which were lashed together, and cargo nets on the ridge’s eastern end on May 1, the book said. However, every man who climbed to the top was killed. Company B attempted the climb with cargo nets farther to the west.

They were ultimately successful in getting two platoons on top of the 400-foot plateau, the book said.

Thousands of Japanese soldiers awaited them in caves and fighting holes, according to a U.S. Army history of Doss. 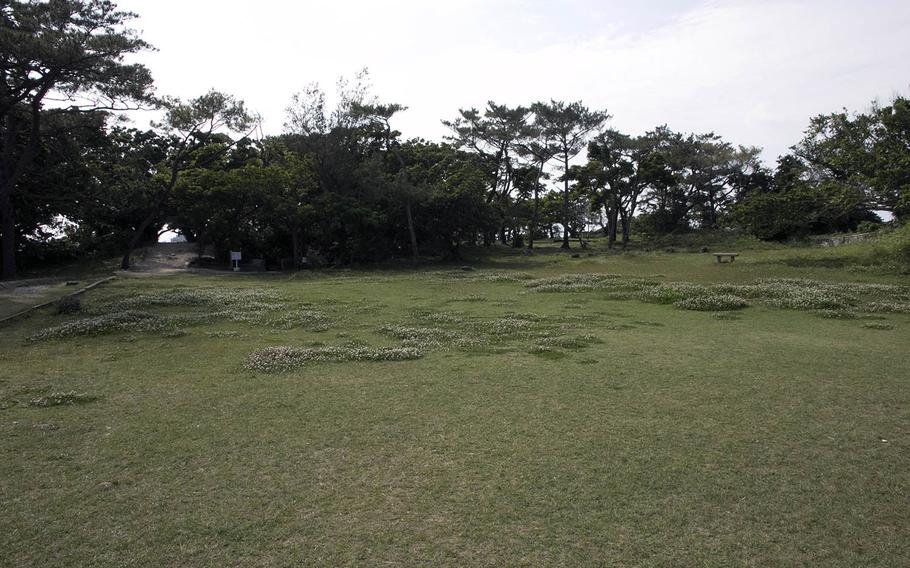 The Maeda Escarpment today, facing what was the Japanese position, as seen on April 4, 2019. (Matthew M. Burke/Stars and Stripes)

As Doss and his fellow soldiers made it to the summit, they were pummeled with artillery, mortar and machine gun fire, according to Doss’ Medal of Honor citation. Seventy-five casualties fell and the rest of the men were forced to withdraw.

He “refused to seek cover and remained in the fire-swept area with the many stricken, carrying them one by one to the edge of the escarpment and there lowering them on a rope-supported litter down the face of a cliff to friendly hands,” the citation reads.

Many of the same men Doss had saved, were the very same ones who had treated him so poorly earlier in his military career, the Army history said.

On May 2, Doss exposed himself to rifle and mortar fire to rescue a casualty some 200 yards forward of the American line, the citation reads. On May 4, he advanced through a “shower” of grenades to rescue four wounded men who had been cut down while assaulting a cave. Doss treated their wounds within eight yards of the cave’s mouth and made four separate trips to evacuate them.

A day later, he exposed himself to shelling and small arms fire while he administered plasma to yet another casualty, his citation reads. Later that same day, Doss crawled to another severely wounded man who lay 25 feet from an enemy position. He treated the man and carried him 100 yards to safety.

The battle for Hacksaw Ridge ended May 6, the Urasoe city website said. However, that was not the end of Doss’ heroics. 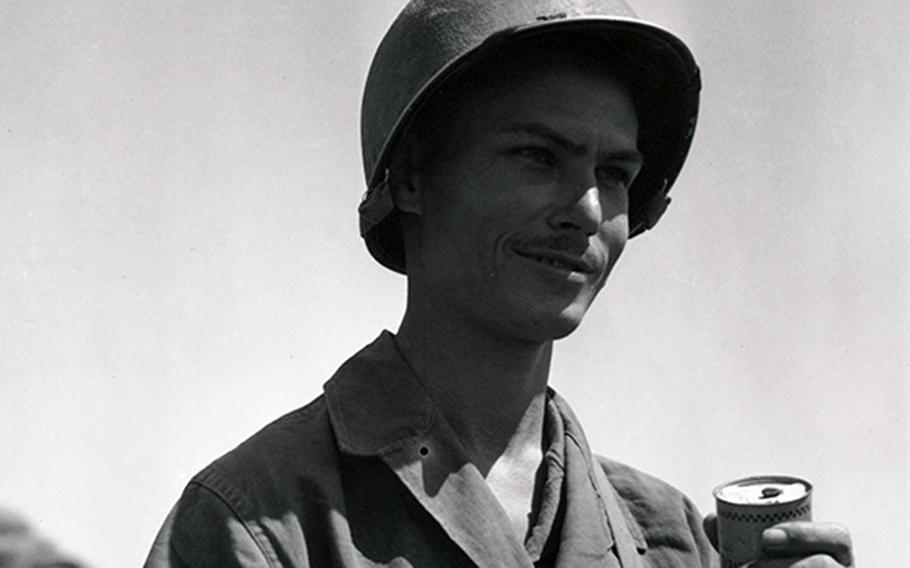 Army Pfc. Desmond Doss is shown in this undated photo. (The National Archives)

On the night of May 21, he was seriously wounded in his legs by a grenade while treating casualties, again, alone in an exposed position near Shuri, the citation reads. He treated himself and waited five hours for help. As he was being evacuated, they were caught in an enemy tank attack.

“Private First Class Doss, seeing a more critically wounded man nearby, crawled off the litter; and directed the bearers to give their first attention to the other man,” the citation said. “Awaiting the litter bearers’ return, he was again struck, this time suffering a compound fracture of one arm.”

Doss famously bound a rifle stock to his shattered arm, which had been struck by a sniper’s bullet, and crawled 300 yards to an aid station, the citation said. He became the first conscientious objector to receive the Medal of Honor on Oct. 12, 1945, from President Harry Truman, the Army biography said.

Nearly 500 of the 800 men in Doss’ battalion became casualties atop Hacksaw Ridge, an Army history of the battle said. Upwards of 3,000 Japanese were estimated killed.

The Maeda Escarpment Peace Monument — erected to honor the war dead from Japan’s 2nd Battalion, 32nd Regiment — lies today next to a gravel parking lot that was carved out of the cliffside after the war. The monument and the gravel lot in its immediate vicinity marks the approximate spot of Doss’ litter-lowering heroics, local tour guides told Stars and Stripes.

There is a set of stairs cut in the rock down to the monument and parking lot.

The scars from the battle atop Hacksaw Ridge are all but gone. Markers in a lovely meadow are all that remain.

Urasoe Castle and the Urasoe Youdore Museum offer a glimpse into Okinawa’s past. Sadly, this past includes the tragedy that was the war. The island’s anti-war identity makes Doss the perfect hero.

Shoji Kudaka of Stripes Okinawa contributed to this report.