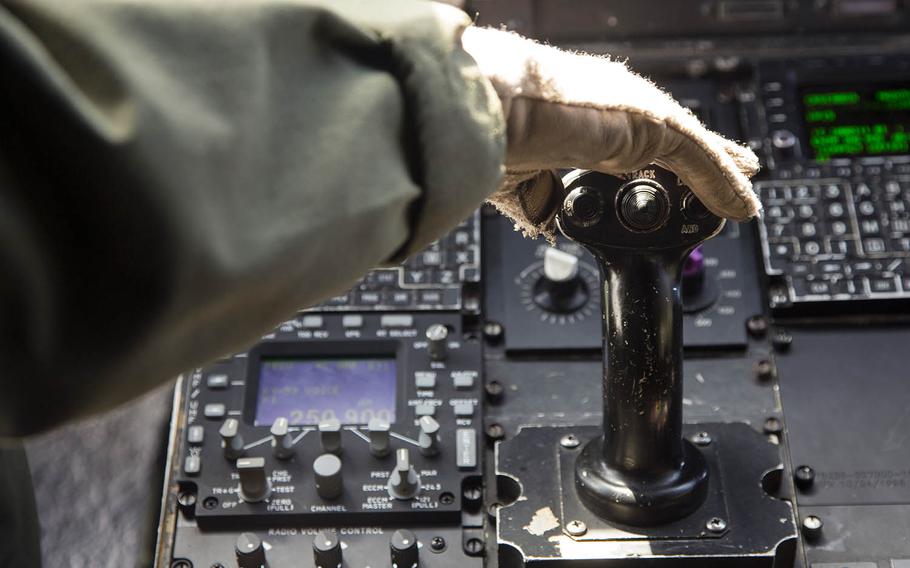 A Marine prepares to steer a CH-53E Super Stallion off the coast of Okinawa, Japan, July 31, 2017. (Christian Robertson/U.S. Marine Corps)

CAMP FOSTER, Okinawa — Okinawa’s governor has demanded that all U.S. military aircraft be grounded on the island for safety checks after a Marine Corps helicopter lost a window over an elementary school on Wednesday.

The window inexplicably fell from a CH-53E Super Stallion at about 10:10 a.m. Wednesday, landing on Futenma Daini Elementary School’s sports field, where more than 50 schoolchildren were playing. One boy received minor injuries from a pebble that flew up during impact.

The school is next to Marine Corps Air Station Futenma’s fence line. Marine officials are investigating the incident.

“I cannot help but feel strong resentment since one wrong move could have led to a serious accident, which could have involved many children’s lives," Onaga wrote in a letter of protest addressed to Japan’s foreign and defense ministers and U.S. Ambassador to Japan William Hagerty.

The strongly anti-U.S. base governor also requested an investigation into — and prompt disclosure of — what caused the accident, viable preventative measures and revisions to the U.S. military’s maintenance and safety management structure.

U.S. Forces Japan officials did not immediately respond to requests for comment Friday; however, local news reports indicated that Futenma’s air operations were continuing, albeit without the Super Stallion.

In his remarks Thursday, Onaga pointed out that Futenma aircraft have been repeatedly involved in mishaps, crashes and emergency landings that cause fear and anxiety for local residents. He accused the U.S. military of making air operations a priority over safety.

Onaga also called attention to a Dec. 7 incident in which a plastic part thought to belong to a U.S. military aircraft landed on the roof of a local day care facility. He said such accidents should never happen, especially at places like nursery or elementary schools, where children should be safe.

“It is absolutely unacceptable and gave great shock for the Okinawan people, who are forced to carry out their lives next to U.S. military bases,” he said.

Onaga called on the Japanese government to take emergency measures to eliminate dangers posed by Futenma flights, including shuttering the base within the next five years. That demand could be complicated by his opposition to a plan to relocate Marine air operations north to Camp Schwab.

Yamamoto said he has asked Lt. Gen. Jerry Martinez, USFJ’s commander, to ground all Super Stallions. He also said he told Onaga about plans to request that the safety of all U.S. military aircraft be “completely assured” before each flight.

Also on Thursday, Okinawa police confirmed that about five officers from the prefectural police headquarters and Ginowan police visited Futenma to deliver the CH-53E window back to Marine officials. They were then allowed to inspect the aircraft. They declined to comment further.