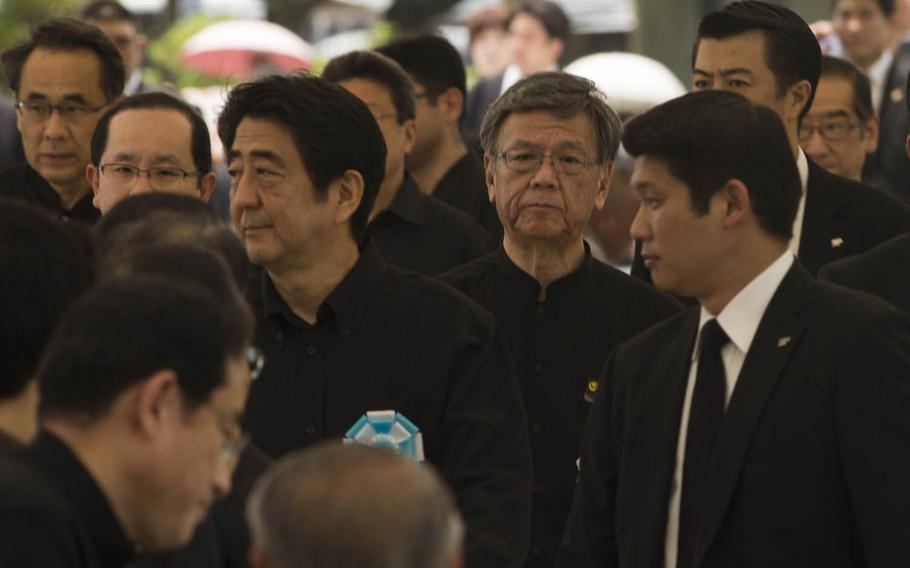 Prime Minister Shinzo Abe, center left, and Okinawa's Gov. Takeshi Onaga, center right, attend a memorial service honoring the fallen men and women of the Battle of Okinawa June 23, 2015, at Okinawa Peace Memorial Park. Onaga revoked a permit Tuesday, Oct. 13, 2015, for landfill work in Oura Bay for a U.S. military runway at Henoko, the latest salvo in his battle with Tokyo over American military posture on the tiny island prefecture. (Courtesy of the U.S. Marine Corps)

CAMP FOSTER, Okinawa — Seeking to block a new U.S. military runway in Okinawa’s remote north, Gov. Takeshi Onaga revoked a permit Tuesday for landfill work in Oura Bay at Henoko, the latest salvo in his battle with Tokyo over the U.S. military presence on the tiny island prefecture.

The runway has become a symbol of resistance for a small but vocal protest movement seeking to reduce the American military’s footprint on Okinawa. Construction was approved in December 2013 by Onaga’s predecessor in exchange for billions in subsidies and would ultimately facilitate the relocation of Marine Corps Air Station Futenma from a densely populated urban area in central Okinawa to Camp Schwab. The Japanese government has said the move is vital to public safety.

The decision to revoke the permit came after weeks of intensive talks with Tokyo broke down and Onaga pleaded his case to the U.N. Human Rights Council. Scholars have said the case will likely be adjudicated by the courts, a process that could take years. In the meantime, the Japanese government has vowed to continue with the project.

“The Japanese and U.S. governments agreed to close Futenma 19 years ago, to remove the danger that residents have been exposed to from the activities at the airfield,” Chief Cabinet Secretary Yoshihide Suga said last week in anticipation of Onaga’s move. “Two years ago, we were granted a landfill permit by the [previous] governor … Once an administrative decision was made [through due process], it should be upheld.”

Suga said Onaga couldn’t see the bigger picture during their negotiations in August and September. Onaga repeatedly claimed that since the land for Futenma was forcibly taken from landowners at the end of World War II, it should be returned with no replacement given. Suga also accused Onaga of flip-flopping on the issue, because he once supported the relocation when he headed the prefectural assembly.

Marine Corps officials on Okinawa did not respond to requests for comment by press time.

Onaga remained defiant during a Tuesday news conference at his office. He said there were legal flaws in the process of granting permission for the runway, including noise and environmental concerns, and therefore it was subject to revocation.

“It is the way Okinawa has been treated since the end of World War II,” Onaga said. “Even after 70 years, 74 percent of U.S. military bases in Japan are located on Okinawa, which accounts only 0.6 percent of the total land surface of the country … The central government has little understanding of the painful experiences suffered by the people of Okinawa.”

Onaga said he would fight on despite being resigned to the fact that he would likely be unable stop construction while the drama plays out in court, and that the project might be completed by the time a verdict is rendered.

“I firmly believe that through litigation the true nature of this problem will be known to people on the mainland and the rest of the world,” he said. “I am fully aware that I am about to challenge the great powers of Japan and the U.S.”