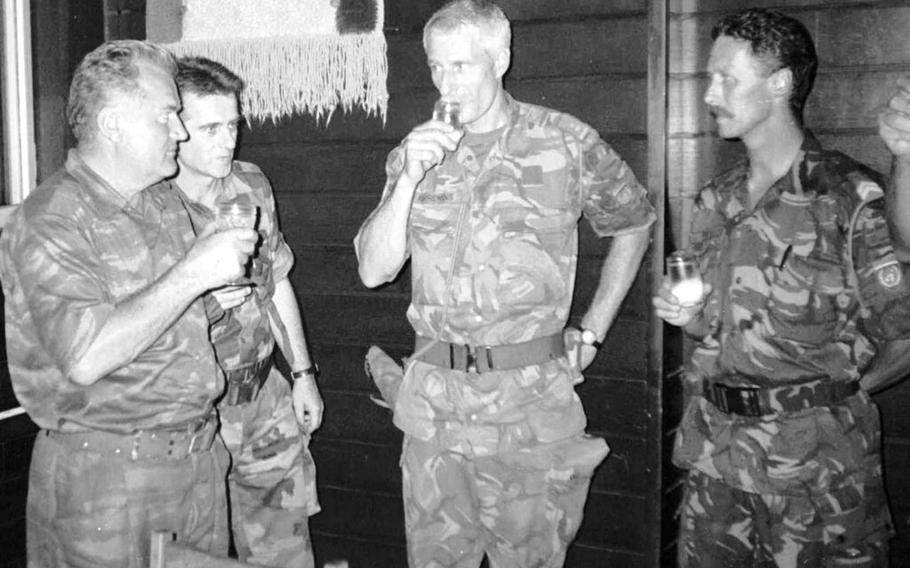 Bosnian Serb Gen. Ratko Mladic, left, drinks with Dutch U.N Commander Tom Karremans, second right, while others unidentified look on, in Potocari, some 3 miles north of Srebrenica, Bosnia, on July 12, 1995. The Dutch government formally apologized Saturday, June 18, 2022 to soldiers who were sent as UN peacekeepers to defend the Bosnian enclave of Srebrenica with insufficient firepower and manpower to keep the peace. (Anonymous via AP)

THE HAGUE, Netherlands — The Dutch government formally apologized Saturday to soldiers who were sent as U.N. peacekeepers to defend the Bosnian enclave of Srebrenica with insufficient firepower and manpower to keep the peace.

The soldiers — veterans now — were overrun by more heavily armed Bosnian Serb forces led by Gen. Ratko Mladic who went on to massacre 8,000 Muslim men and boys in July 1995, in a bloodbath that an international war crimes tribunal labeled genocide.

Prime Minister Mark Rutte addressed hundreds of veterans of the Dutchbat III peacekeeping unit on Saturday at a military base in the central Netherlands, telling them that after nearly 27 years “some words have still not been said.”

“Today, I apologize on behalf of the Dutch government to all the women and men of Dutchbat III. To you and the people who can’t be here today. With the greatest possible appreciation and respect for the way Dutchbat III under difficult circumstances kept trying to do good, even when that was no longer possible,” Rutte said. Dutch Prime Minister Mark Rutte attends a briefing at the Europa building in Brussels on May 30, 2022. (Olivier Matthys/AP)

The ceremony came after a report was published last year into the experiences of the roughly 850 troops who made up Dutchbat III. The study made recommendations including that the government make a “collective gesture” to address what it called “the perceived lack of recognition and appreciation, given the exceptional circumstances in which the near-impossible has been asked” of the Dutch peacekeepers.

The Netherlands has long wrestled with the legacy of the Srebrenica massacre. Then Prime Minister Wim Kok resigned in 2002 after a report harshly criticized Dutch authorities for sending soldiers into a danger zone without a proper mandate or the weapons needed to protect about 30,000 refugees who had fled to the Dutch base in eastern Bosnia.

In 2019, the Dutch Supreme Court ruled that the Netherlands was partially liable in the deaths of about 350 Muslim men murdered by Bosnian Serb forces during the massacre.

The court ruled that Dutch peacekeepers evacuated the men from their military base near Srebrenica on July 13, 1995, despite knowing that they “were in serious jeopardy of being abused and murdered” by Bosnian Serb forces.

The U.N. also has been criticized for failing to authorize NATO airstrikes to support the lightly-armed Dutch troops in July 1995 as they came under attack.