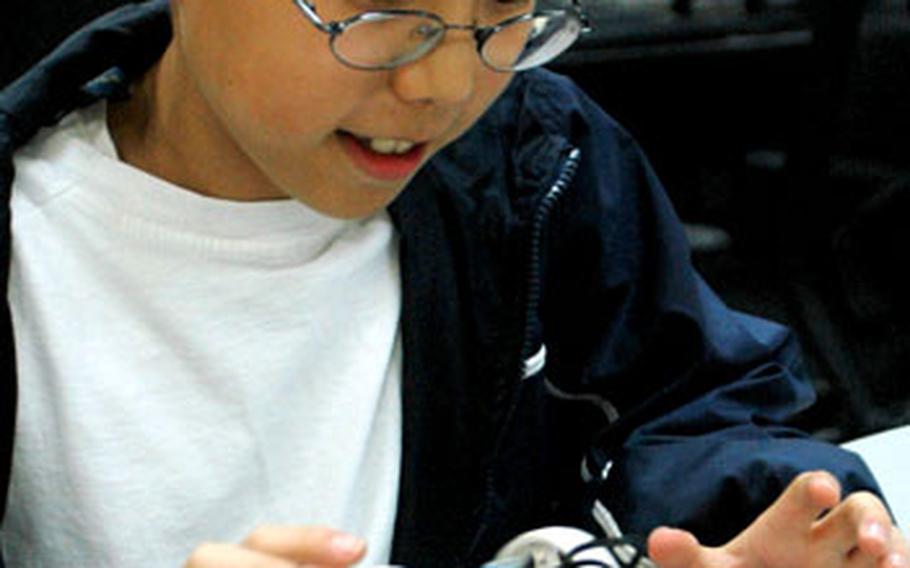 Max Kim plays with a robot during a meeting of the Camp Zama Lego Robotic Club. (Bryce S. Dubee / S&S)

Max Kim plays with a robot during a meeting of the Camp Zama Lego Robotic Club. (Bryce S. Dubee / S&S) 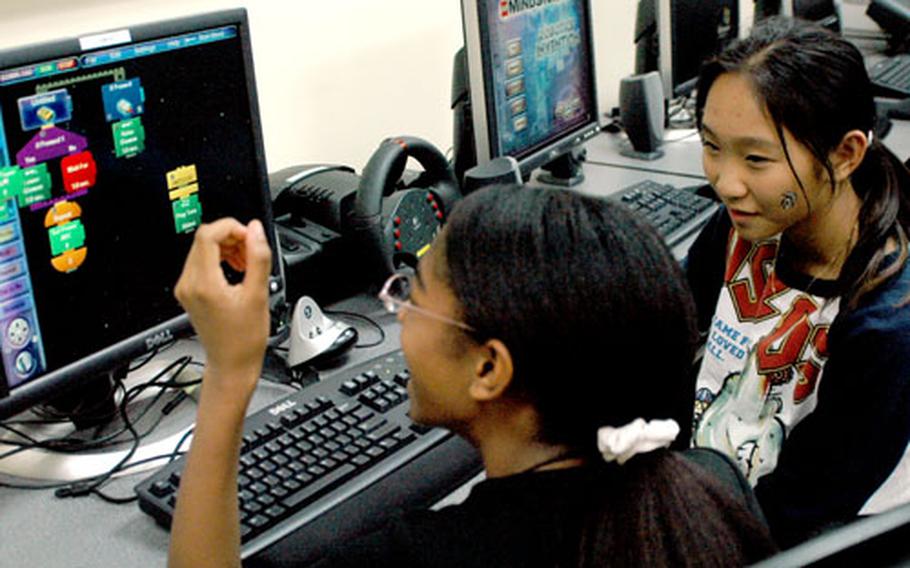 Annette Thomas, left, and Jennie Rice work on a computer program for a robot they are building. Both are members of the Camp Zama Lego Robotic Club. (Bryce S. Dubee / S&S) 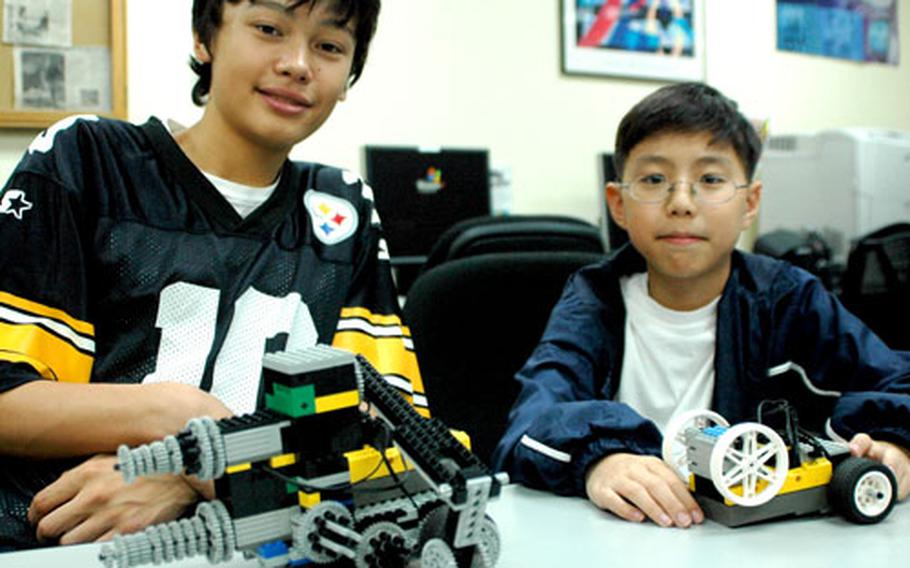 Eric Tankm, left, and Max Kim show off two of the Camp Zama Lego Robotic Club’s robots. Both have been members of the club for almost two years. (Bryce S. Dubee / S&S)

CAMP ZAMA, Japan &#8212; There are robots at Camp Zama, lots of them. Built to perform a variety of tasks, they roll around equipped with a variety of tools and weapons. And they were all built by children.

Operating out of the Camp Zama Youth Center, the Lego Robotics Club meets once a week to design, build and program robots made out of Legos.

Unlike normal versions of the building block toys, these Legos are specially designed to be used in various robotics projects. Motors, motion and sound sensors, battery packs and cables are just a few of the pieces of equipment Club members use to build their machines.

However, students don&#8217;t just build their robots; they also have to program them to complete tasks. Every three months, the club members must build a robot for a particular challenge. Challenges range from moving a soda can across a specified area, to negotiating an obstacle course, to defeating other robots in an all out battle royal.

&#8220;The kids really like the competitions, especially when they get to gang up on me,&#8221; said Ervin Lawrence, a Youth Center technology lab instructor and the club founder

Lawrence founded the club four years ago after attending a technology conference in the United States. At the conference, he saw the Lego Robotics on display, and decided to introduce it to Camp Zama. Since then, the club, open to students from grades six to twelve, has grown to about ten members.

Using the Lego Computer Aided Design (CAD) application, the students figure out what they want their robot to do depending on the challenge. After plotting out their program in the CAD application, they download it onto a special memory block on their robots. Students generally spend about three months working before their robots are complete.

Lawrence explained that the club is &#8220;entirely youth run and youth driven&#8221; and that he is there mainly for support.

Being a club member is &#8220;pretty cool&#8221; said Max Kim, the club&#8217;s current president. Kim explained that in the last competition, he and his partner won the battle by attaching a swinging arm with a hammer onto their robot.

Hoping to be an engineer some day, Kim said that he enjoys the different robot challenges at each competition and is looking forward to the next one: an obstacle course.

For more information about the Lego Robotics Club, visit www.zamayouthcenter.org.