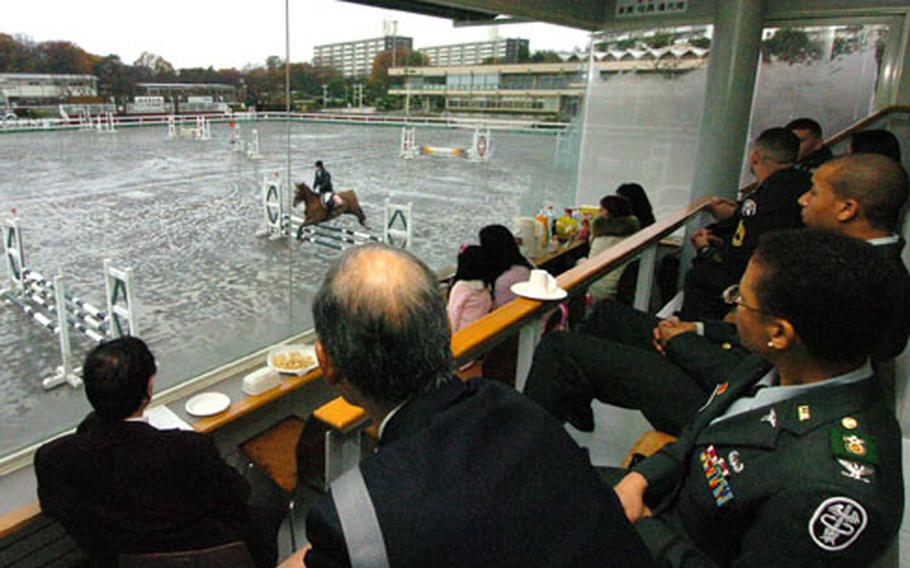 Camp Zama soldiers watch as a Japanese medical student rides her way through the equestrian course during the Sam’s Cup event at Baji Park in Tokyo on Sunday. (Tim Wightman/S&S)

Medical students, a U.S. Army general and the sport of horseback riding: three subjects that have nothing in common anywhere else in the world.

In Japan, however, all three come together annually for the "BG Sams Cup Competition," an equestrian event involving Japanese medical students representing their universities.

On Sunday, the riders gathered at Baji Park in Tokyo hoping to claim the prize named after and donated by U.S. Army Brig. Gen. Crawford F. Sams, who served in Japan following World War II.

As chief of the Public Health and Welfare Section in the war-torn country, Sams&#8217; job was to reconstruct the nation&#8217;s health care.

Credited with implementing narcotics control and a disease-tracking system, and with initiating school lunch programs for children, Sams&#8217; achievements inspired Camp Zama to change the name of its medical clinic in April 2006 to the Brig. Gen. Crawford F. Sams U.S. Army Health Clinic.

A fan of horseback riding, Sams also used his influence to establish the equestrian competition for medical students.

Camp Zama soldiers have been invited to attend the 60-year-old event since the clinic&#8217;s name change three years ago.

"You&#8217;ve actually got to guide the horse and pull back a little bit to actually make that horse jump," said Sgt. Alan Martin from inside the viewer box that overlooked the competition won for the third straight year by Showa University. "It&#8217;s pretty interesting. I thought they just steer their horse toward whatever and it jumps."

Sgt. 1st Class Anthony Molina, who has attended the past three competitions, said his interest in the sport has grown each year and he feels connected to the event.

"I&#8217;m really thankful &#8212; to be honest &#8212; to have actually been a part of the renaming of our clinic and knowing a little bit about what [Sams] did for the Japanese," Molina said during the awards dinner. "I think it&#8217;s extremely important, not only for Zama but for our two nations."

Toshikazu Takagi, president of Japan Medical, Dental, and Pharmaceutical Equestrian Federation, holds Sams&#8217; contributions to Japanese medicine in high regard, but he acknowledges some Japanese would frown upon the universities&#8217; friendships with the U.S. military.

"The making up of this relationship is not welcome by some people, maybe," he said Sunday. "I don&#8217;t care about that. My father is also (a) medical doctor in Japanese Maritime Self-Defense Forces. Our job is to help the people, not to be (a) politician."