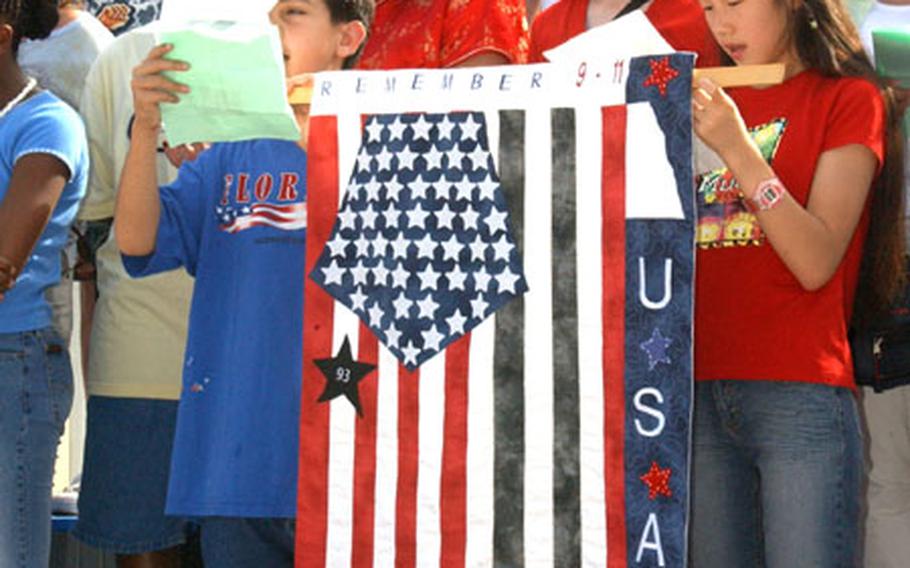 Students from Arnn Elementary school at Camp Zama&#39;s Sagamihara Housing Area sing "America the Beautiful" during a 9-11 Remembrance Ceremony Thursday. The flag some of the students are holding was designed by Arnn students, and each element represents a significant event of the day&#39;s tragedies, from the collapse of the World Trade Center to the heroic actions of the passengers of Flight 93. (Courtesy of U.S. Army)

They&#8217;ll forever associate the anniversary of that day with a class project: designing a flag with three distinct markings symbolic of the tragic events that unfolded that day.

&#8220;It shows everything that happened,&#8221; student Cole Dadswell said Thursday, the second anniversary of the attack.

And the union of 50 stars in the five-sided pentagon stands for, well, the Pentagon.

The design meant to stand for unity was unveiled at a Sept. 11 observance in front of the new campus Thursday morning.

Students also held a 2-foot by 4-foot quilt of the same pattern and recited an original Sept. 11 pledge.

The flag project began last year with a discussion in one of sixth-grade teacher Jeffrey Dreher&#8217;s classes.

His students assessed a memorial flag published in Stars and Stripes &#8212; an exact replica of Old Glory, except for two black stripes representing the twin towers &#8212; and talked about what was missing.

Soon, the design with three Sept. 11 symbols was created.

The project carried over to this school year as all Arnn sixth-graders helped make the flags, with one addition, distributed at Thursday&#8217;s observance.

Tied into flag construction was a lesson on the importance of remembering the terrorist attacks.

Sixth-graders at Thursday&#8217;s ceremony also had their own ideas about how to remember the attacks.

&#8220;I think we should have a day off to celebrate this day because (Flight 93) saved the White House from terrorists,&#8221; said student Chase Barrett.

Dreher and his students are hoping their flag design is unique enough to secure a trademark.

Ultimately, they want to replicate the flag and the Sept. 11 pledge of allegiance on coffee mugs, T-shirts, polo shirts and quilts.

Proceeds would go to families of U.S. troops killed fighting the war on terrorism, Dreher said.

Sixth-grader Kiele Allen likes most &#8220;the gold trimming outside the two towers. It symbolizes that the two towers always shine day and night.&#8221;