Zama rolls along with Jenkins hoopla 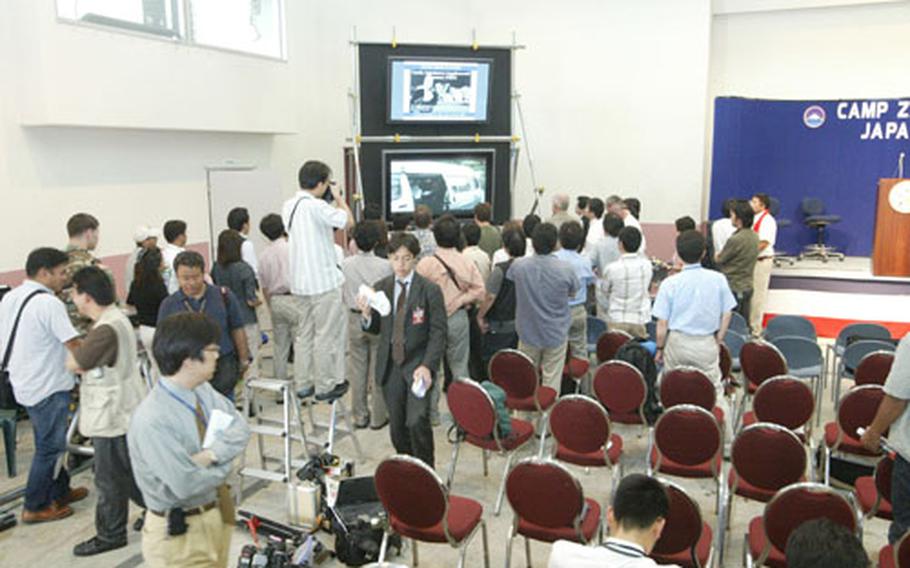 CAMP ZAMA, Japan &#8212; When accused U.S. Army deserter Sgt. Charles Jenkins arrived, saluted and turned himself over to Camp Zama authorities Saturday, this small, quiet Army base outside Tokyo found itself in a very unaccustomed spot: the cross hairs of the international media.

But most base residents appear to be taking all the attention in stride.

That wave of media focus peaked when Jenkins turned himself over to Camp Zama authorities to face charges of desertion, aiding the enemy, soliciting other servicemembers to desert and encouraging disloyalty.

Since then, as the Uniform Code of Military Justice process moves forward, he&#8217;s been assigned to Headquarters and Headquarters Company to perform administrative duties, placed in uniform and given a haircut and medical examination.

On Wednesday, Jenkins and his family moved into Army base housing, according to Maj. John Amberg, a U.S. Army Japan spokesman.

Staff Sgt. Lloyd McDonald of the 88th Military Police Detachment was on duty Saturday in the Provost Marshal&#8217;s Office when Jenkins arrived and saw him inside the building. He says some soldiers have taken on additional duties following the high-profile surrender.

Base officials reported no credible threats. But &#8220;we&#8217;ve had to conduct searches of areas with K-9 units prior to him going anywhere on post,&#8221; McDonald said. &#8220;There has been a whole lot of publicity and cameras, and people have to get escorted. The K-9 and anti-terrorist patrol unit have had to search media and satellite trucks.

&#8220;Overall, I think the attention has been good. They get to see how we operate and do our daily business. We try to be professional and do our jobs to perfection.&#8221;

Pfc. Paul Bates of the 78th Aviation Battalion agreed, saying the media attention might shine some positive light on the installation&#8217;s mission and spur greater support from Congress.

Still, the Jenkins stir has caused a few slight inconveniences.

Staff Sgt. Valarie Claxton, also with the 78th Aviation Battalion, said there was a delay in weapons issue for guard duty at the Zama Arms Room on Tuesday because the armorer had been asked to escort Jenkins.

When he travels around post, Jenkins must be escorted by a sergeant or higher-ranking soldier at all times, base officials said.

Neriman Yusufoff, a servicemember&#8217;s spouse living at Sagami General Depot, said she&#8217;s read about the Jenkins case in the newspaper but hasn&#8217;t spotted him.

&#8220;A lot of my Japanese students have been asking about him,&#8221; she said. &#8220;The Japanese papers are doing more about him. All the media being here has had no effect on me, but I think it puts more attention on security. People have to be more careful.&#8221;

Lisa Kresovich, a civil engineer for the Japan Engineer District on Zama, said her husband, Bruce Riley, glimpsed Jenkins at the commissary but the sergeant&#8217;s presence hasn&#8217;t significantly altered life on base.

&#8220;It generates some chatter,&#8221; she said, &#8220;but now, everything is back to normal for us. It really hasn&#8217;t impacted what I&#8217;m doing or life on Camp Zama. The first day with all the media and satellite TV trucks and press people across the street, we noticed that. But we still came and went as normal.

&#8220;I really don&#8217;t think about it that much, but I&#8217;ll talk to my parents this weekend and probably get their stateside perspective of all the media coverage. We just kind of ignore it over here and go about our business.&#8221;