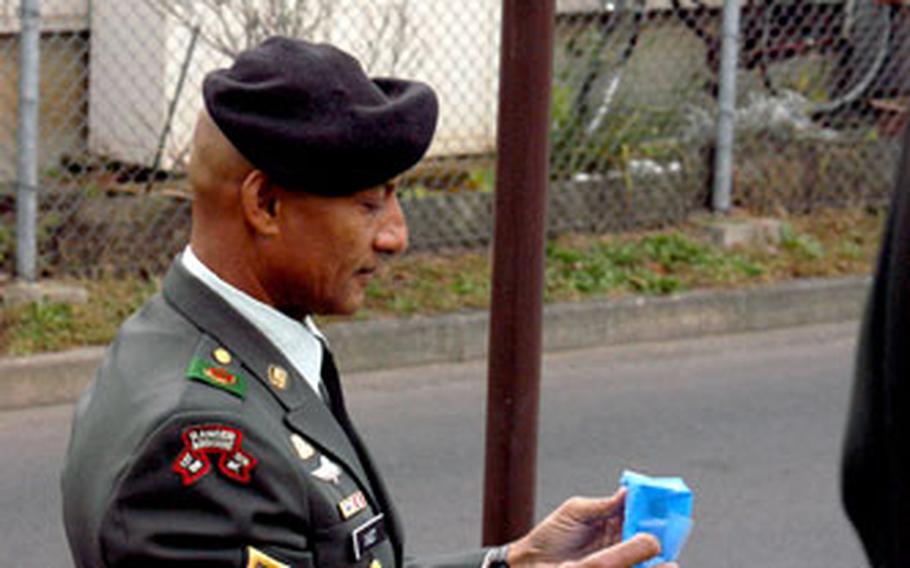 CAMP ZAMA, Japan &#8212; After 25 years serving his country, including through three wars, and 25 more serving as a civilian at Camp Zama, it seemed fitting that retired Command Sgt. Maj. Jimmie Coomer be honored with a legacy at the Army base he called home for so long.

On Veterans Day, members of the community gathered to rededicate Long Road along the camp&#8217;s golf course as Coomer Road.

During the decades Coomer, who died in July 2004, served as the golf course manager at Zama, hardly anyone knew his heroic past, said U.S. Army Japan Command Sgt. Maj. Charles D. Hopkins, who helped lead the charge to honor Coomer.

Coomer first served in World War II as a sailor. He joined the Army in time for the Korean War and wore the Army uniform during three tours in Vietnam.

He retired as Zama&#8217;s sergeant major in the 1970s, about the time Hopkins joined the Army.

Coomer was one of the senior enlisted pioneers who led and motivated troops at a time when the senior enlisted corps was at its weakest, following Vietnam, Hopkins said. The noncommissioned officer education system, including the academy for sergeants major, began about that time.

The Zama community remembered Coomer as a man always willing to help others. He taught countless classes on citizenship, helping many in the community near Zama earn U.S. citizenship.

To honor Coomer, Hopkins and members of the Association of the United States Army brainstormed ideas, from a plaque to a memorial bench. Someone suggested renaming the road along the golf course, said Paul Wilson, president of AUSA&#8217;s Zama chapter.

&#8220;We wanted to come up with an appropriate memorial,&#8221; Wilson said during Friday&#8217;s rededication ceremony at the golf course.

U.S. Army Garrison Japan Command Sgt. Maj. Eusebius P. Cadet said Coomer is a good influence for soldiers today because hearing about someone who survived so many conflicts inspires young troops. &#8220;It keeps the young guys motivated,&#8221; he said.

The ceremony was even more fitting that it was held on one of the two days set aside to remember those in the U.S. armed forces, Hopkins said. &#8220;Remember Veterans Day is not just a holiday and a time to get drunk,&#8221; Hopkins said. &#8220;It is a time to recognize service past, present and future.&#8221;