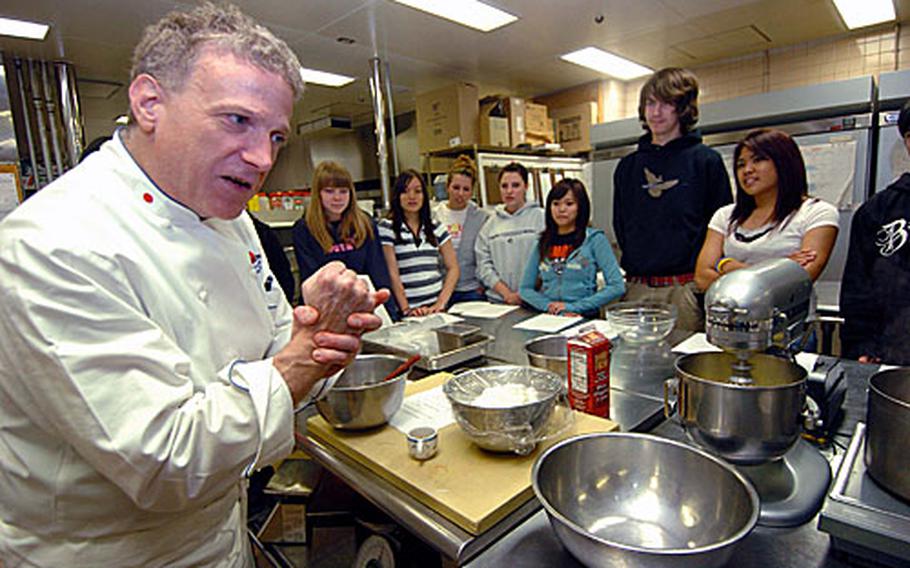 Putnam Yost, executive chef at the New Sanno Hotel – an American-style hotel for U.S. servicemembers and Defense Department employees – emphasizes a point during a demonstration on Tuesday for Zama High School students in Tokyo. Twenty-eight culinary arts students attended a one-day seminar at the hotel to learn about the food service and hospitality fields. (Scott Schonauer / S&S)

Then she stepped into the New Sanno Hotel kitchen on Tuesday.

A career as a cook in a big kitchen quickly soured. She found out that it is harder than many people think.

Zama American High culinary arts students got an inside look at the food service industry as part of a one-day field trip to the Sanno, an American resort for U.S. servicemembers and Defense Department employees.

The class is part of the National Restaurant Association&#8217;s High School ProStart Program, which helps prepare students for jobs in food service. The program has nearly 45,000 high school students enrolled worldwide, according to its Web site.

Christine Geist, who teaches culinary arts at Zama American, said the program &#8212; along with Tuesday&#8217;s field trip to the downtown Tokyo hotel &#8212; would make her students marketable to companies soon after they leave school. Once they complete the training, she said students would be &#8220;ready to go to work for a company right away.&#8221;

But Robert Wilkes, the assistant food and beverage manager for the New Sanno, warned students that while the jobs are plentiful, they are much more demanding than many people think.

TV shows have glamorized chefs; many restaurant managers and chefs work long hours and often under extreme pressure in a competitive market. Last year, U.S. News and World Report listed the job of a chef an &#8220;overrated career&#8221; because of its monotony and schedule.

During the seminar, students learned about the proper way to set the table, which wine goes best with which meal, how to manage inventory and how they can apply math to business. They also got a lesson on what could be called &#8220;napkin origami.&#8221; By the end, students learned how to fold a napkin into something that looked like a hat.

Junior Corinne Labial, 16, said the best part of the trip was watching Executive Chef Putnam Yost whip up chocolate mousse as the other cooks prepared lunch. Labial, whose favorite dish is churros, wants to be a nutritionist.

Junior Phillip Roper, 17, wants to be a baker. He said it&#8217;s important for him to see how the hotel&#8217;s restaurant works behind the scenes.

Watching banquet manager Lazlo Pinter show the class how to set the table and make napkins into works of art helped Taylor shift her goal of becoming a chef to hospitality management.