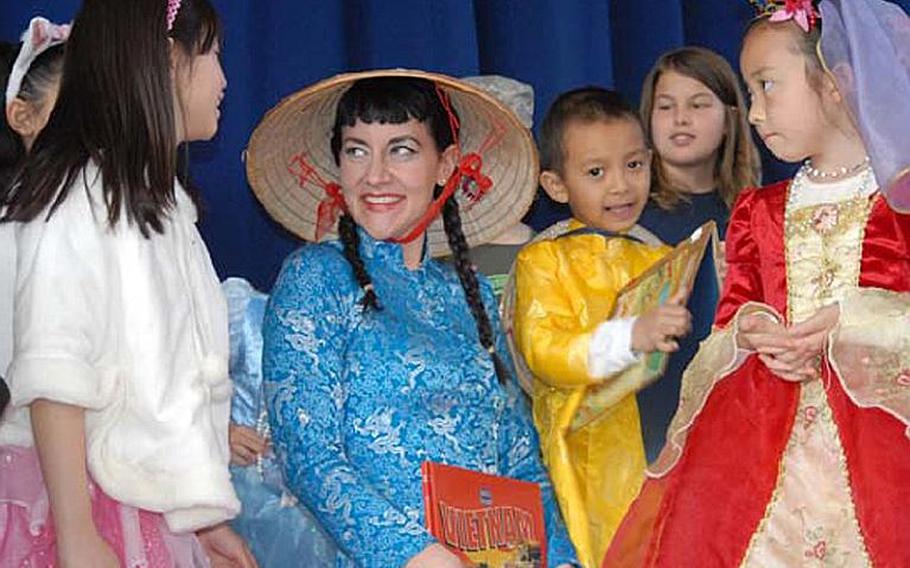 Valerie R. Garza on stage with her class at Arnn Elementary School during the ?Character Storybook Parade,? a school-wide Read Across America celebration on March 30. Garza, a first-grade teacher at the Camp Zama school, passed away at Tokyo Metropolitan Hiroo Hospital on May 6. (Courtest of Arnn Elementary Scho)

The Isaiah Institute, a charitable foundation Garza helped found in 2005, posted a message on its Facebook page Tuesday that said she died from complications related to a pre-existing heart arrhythmia condition.

The former social worker began her teaching career with DODEA at Arnn in 2003 and had since built a reputation as a compassionate and dedicated educator, Principal Sue Morin said in the DODEA release.

&#8220;Valerie always put children first,&#8221; Morin said. &#8220;When students were in her classroom and in and around the school, her sole focus remained children, giving them her undivided attention and genuine care.&#8221;

Garza contributed to several schoolwide activities including Children&#8217;s Theater and was noted by her colleagues for going the extra mile for students.

Her generous nature extended beyond the classroom walls with the Isaiah Institute. She and her husband, Alex, established the organization after the 2004 Indian Ocean tsunami to help people in remote areas of the devastated island nation of Sri Lanka.

A memorial fundraiser in Garza&#8217;s name will be held for the institute on June 4, according to its Facebook page. Arnn Elementary will host a &#8220;Prince and Princess Day&#8221; to honor Garza&#8217;s memory Friday afternoon at the school. The memorial is open to the public.