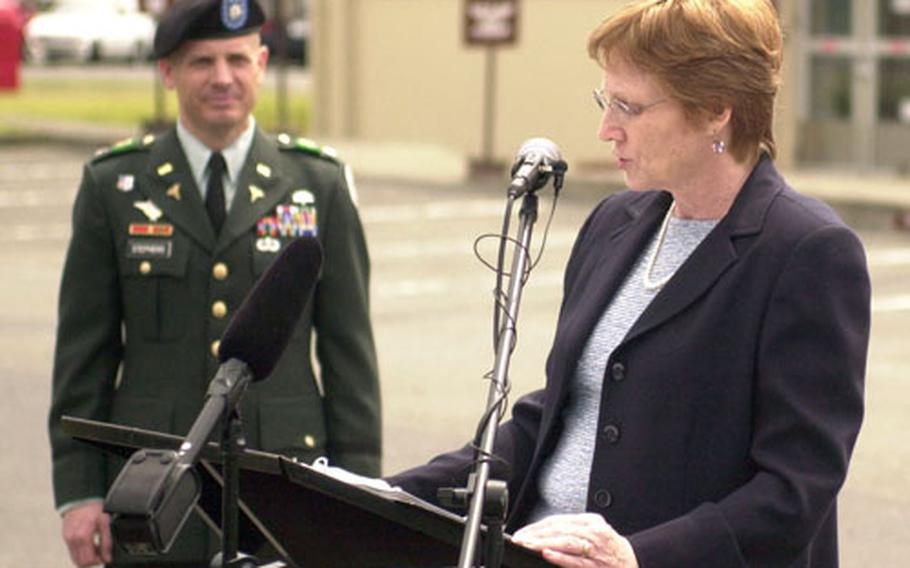 CAMP ZAMA, Japan &#8212; In the wake of World War II, the top U.S. Army doctor in occupied Japan reformed and transformed its health-care system, helping the nation become one of the healthiest in the world.

On Friday, the Army recognized his achievement as both a soldier and a healer by renaming Camp Zama&#8217;s medical clinic the Brig. Gen. Crawford F. Sams U.S. Army Health Clinic.

&#8220;Gen. Sams led the most unprecedented and unsurpassed reforms in public health history,&#8221; said Maj. Gen. Gale S. Pollock, commander of the Pacific Regional Medical Command at Tripler Army Medical Center, Hawaii. &#8220;He saw the importance of working in the structure of the Japanese society.&#8221;

In 1945, Sams joined the staff of Gen. Douglas MacArthur&#8217;s General Headquarters in Manila. Sams moved to Japan later that year as chief of the Public Health and Welfare Section.

In that position, he was responsible for reconstructing health care in war-torn Japan, implementing narcotics control and a system to track diseases and initiating school lunch programs for children, among other efforts, according to a statement by John T. Greenwood, medical history chief for the U.S. Army Surgeon General.

University of Toronto Associated Scholar Dr. Sey Nishimura knew Sams and wrote a book about him titled &#8220;The Man Who Saved The Lives of Japanese People.&#8221; She told the audience that, in 1949, penicillin available through Sams&#8217; programs saved her life after she contracted pneumonia. Powdered milk at her school, provided under another program, helped her grow strong.

Other speakers who knew Sams had similar praise for his contributions to Japan, including Dr. Eiji Takamae, who translated Sams&#8217; autobiography, &#8220;Medic,&#8221; into Japanese.

For the soldier-healers at Camp Zama today, the renaming is significant also because it provides the clinic an identity and a &#8220;personality,&#8221; said Lt. Col. Ronald Stephens, the facility&#8217;s commander.

&#8220;Naming this medical facility, where sick and injured soldiers come to be healed, after Brig. Gen. Crawford F. Sams honors him and reminds us all that there is more to military service than fighting wars,&#8221; said U.S. Army Japan commander Maj. Gen. Elbert N. Perkins. &#8220;General Sams showed us all that compassion is also an Army value.&#8221;

After a 33-year Army career, Sams died in 1994. His granddaughter, Jane Deck, and great-granddaughter, Miriam Deck, attended the ceremony Friday.