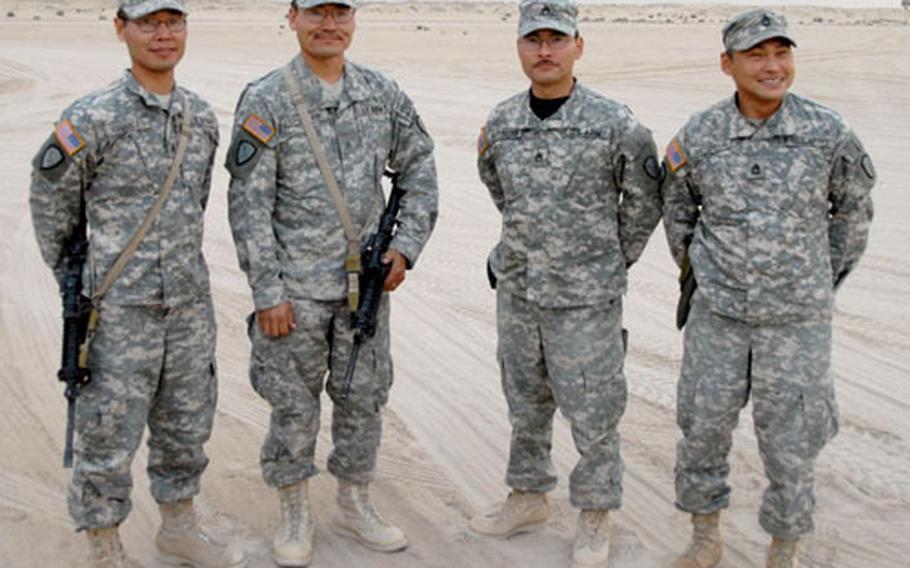 Brothers Sgt. Teddy Charles and Sgt. Andrew Charles and brothers Staff Sgt. Michael Uttereyuk and Sgt. 1st Class Frances Uttereyuk, at Camp Virginia in Kuwait. The Alaska Army National Guard soldiers are Yupik Eskimos and live in isolated villages in a part of Alaska that lacks roads. Both sets of brothers say they are seeing much more of each other in Kuwait than they do at home in Alaska. (Megan McCloskey / S&S)

Brothers Sgt. Teddy Charles and Sgt. Andrew Charles and brothers Staff Sgt. Michael Uttereyuk and Sgt. 1st Class Frances Uttereyuk, at Camp Virginia in Kuwait. The Alaska Army National Guard soldiers are Yupik Eskimos and live in isolated villages in a part of Alaska that lacks roads. Both sets of brothers say they are seeing much more of each other in Kuwait than they do at home in Alaska. (Megan McCloskey / S&S) 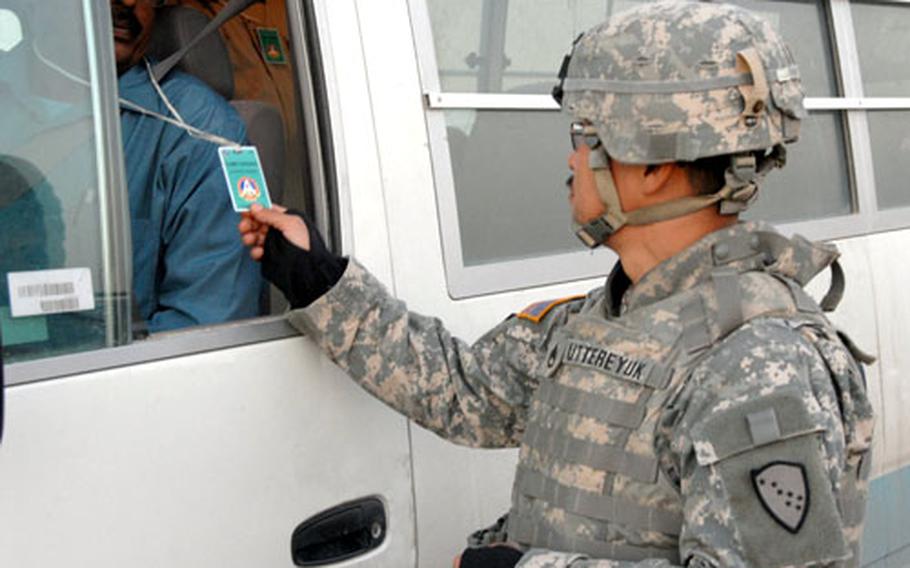 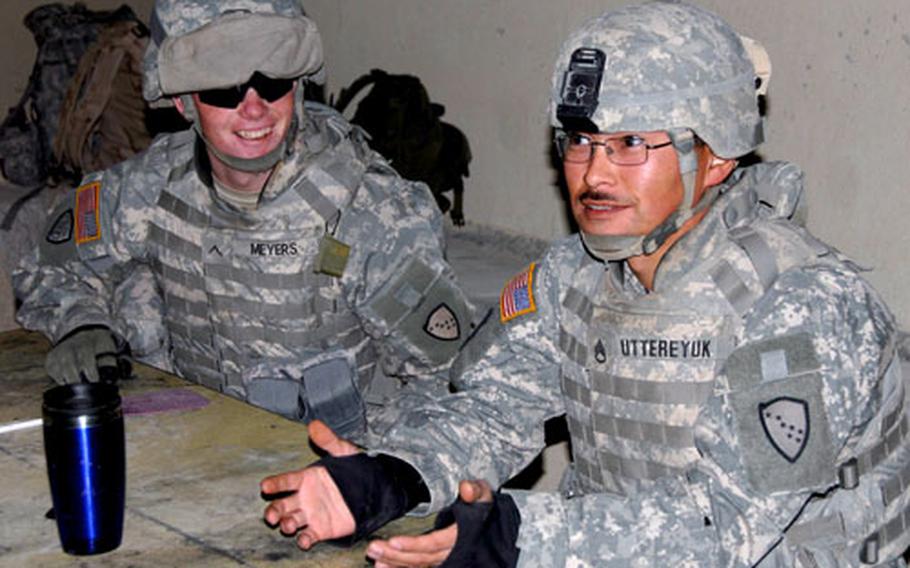 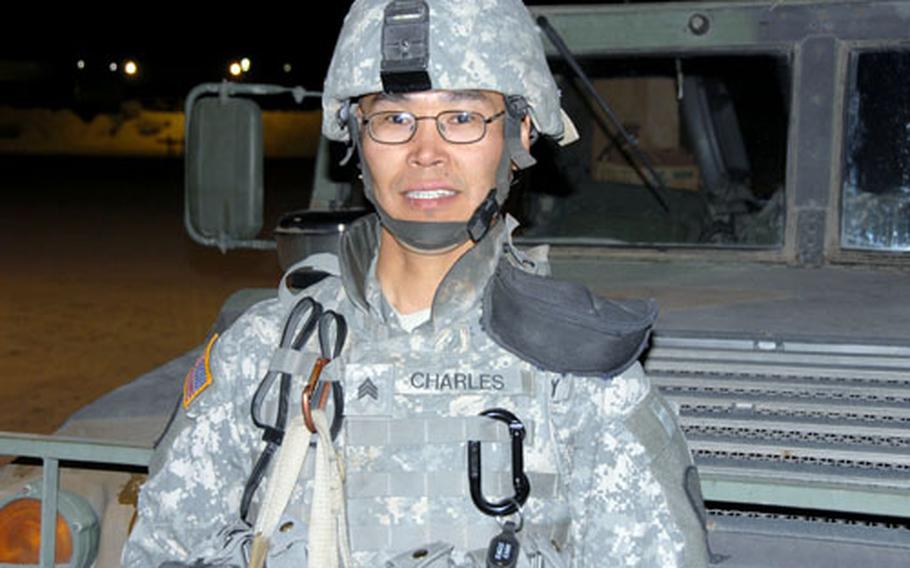 Sgt. Teddy Charles, 44, lives in Tooksuk, an Alaskan village of more than 700. His brother-in-law is helping to support his wife and seven children while he is deployed. (Megan McCloskey / S&S)

These items aren&#8217;t likely to show up on the menu at the local dining facility in Kuwait.

So when Sgt. 1st Class Francis Uttereyuk got a care package last week from Alaska with caribou jerky, he was suddenly a very popular guy at camp.

The Uttereyuks and about 100 others with the 2nd Battalion, 297th Infantry of the Alaska Army National Guard are Yupik (pronounced YOU-pick) Eskimos. Many of the Yupik live in isolated, small villages where subsistence hunting, fishing and gathering is the main source of their diet. And the deployed Yupik in the Kuwaiti desert are missing their native food.

Or seal with a plant with a mild onion taste, foraged by mice and then picked from their dens.

In the spring season, the eggs of ducks, geese and seagulls are popular in the villages along the coast.

The unit has been in Kuwait for about six weeks and will be doing a one-year tour.

For those who are the main hunter in their household, being deployed is quite a burden for their family. Arrangements have to be made for others to step in.

Sgt. Teddy Charles, 44, who lives in a village of more than 700 called Tooksuk, said his brother-in-law is supporting his wife and seven children while he is away.

Francis Uttereyuk said before he deployed he bought extra freezers and packed them with food in preparation for his absence. His 17-year-old son is taking over the hunting duties, and his wife&#8217;s family is helping out as well.

The Yupik have been introducing the other soldiers to their native food. The other day one of them got a care package with Eskimo ice cream, called &#8220;agutak&#8221; in Yupik. The dish isn&#8217;t frozen but rather more of a yogurt made from salmonberries, blackberries and red berries.

Yupik villages are fairly secluded from one another and the rest of the state, because there are no roads in southwestern Alaska. People travel by snowmobile and compass in the winter and four-wheeler in the summer. Gas has to be brought in by barge during the summer to last through the cold months and grocery items are flown in. A gallon of milk costs around $11.

For some of the 297th soldiers who have multiple family members in the Guard, the deployment to Kuwait means seeing a whole lot more each other than when they&#8217;re home in Alaska, which for the Uttereyuk brothers was &#8220;once in a blue moon,&#8221; Michael said.

First Sgt. John Flynn has been trying to bring a little bit of home to Kuwait. An important part of the Yupik social network is the steam bath, which is used not only for hygiene but also for mediation and relaxation. Flynn is working on getting one set up at Camp Virginia.

For now, the soldiers like to spend their free time sitting around together and talking in their native tongue, which has become a bit of an issue at work.

The leadership has banned Yupik on the radios.

Flynn, who is from Bethel, said many of the soldiers in leadership positions, including himself, speak Yupik as their primary language.

But Gawrys said the Yupiks&#8217; sense of family is an advantage.

More about the Yupik ...

&#182; It has long been a tradition of the Yupik to be members of the National Guard &#8212; or before Alaska became a state in 1959, the Alaska Territorial Guard.

&#182; Staff Sgt. Michael Uttereyuk said he joined the National Guard almost 20 years ago to follow in the footsteps of his grandfather and father &#8212; and older brother, who joined a couple of years before him.

&#182; With Alaska&#8217;s position so near the former Soviet Union, the Yupik were a key part of border patrol during the Cold War.

&#182; Click here for information about the Yupik at the Web site of the Alaska Native Heritage Center.

&#182; A link to the Ayaprun Elitnaurvik Yupik Immersion School Web site, with a Word of the Week feature.

&#182; Read more about the Yupik language here, from the Alaska Native Language Center.