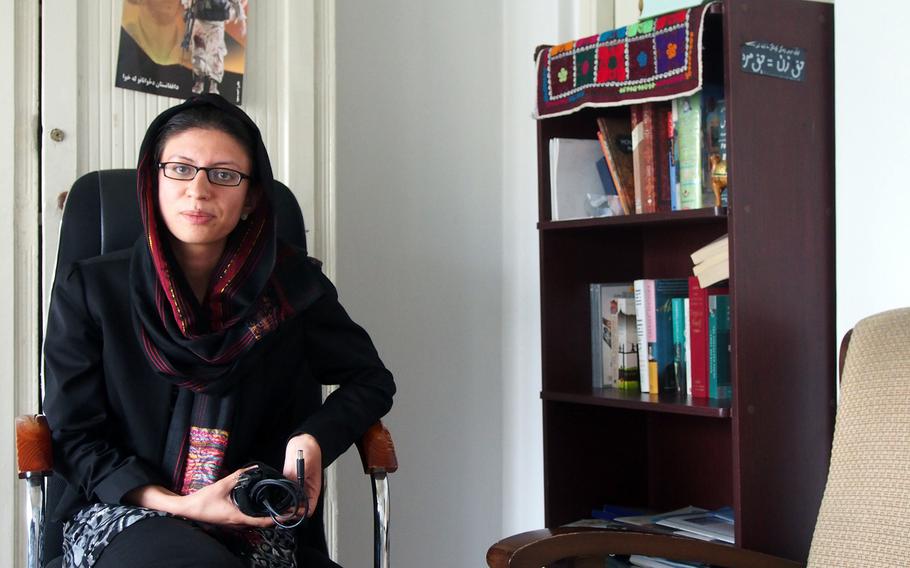 Buy Photo
Shaharzad Akbar, a member of 1400's central council. Her group, made up of young government and NGO workers, entrepreneurs and students, is working to turn out the youth vote in next year's presidential election and eventually become a political party. (Heath Druzin/Stars and Stripes)

Buy Photo
Shaharzad Akbar, a member of 1400's central council. Her group, made up of young government and NGO workers, entrepreneurs and students, is working to turn out the youth vote in next year's presidential election and eventually become a political party. (Heath Druzin/Stars and Stripes) 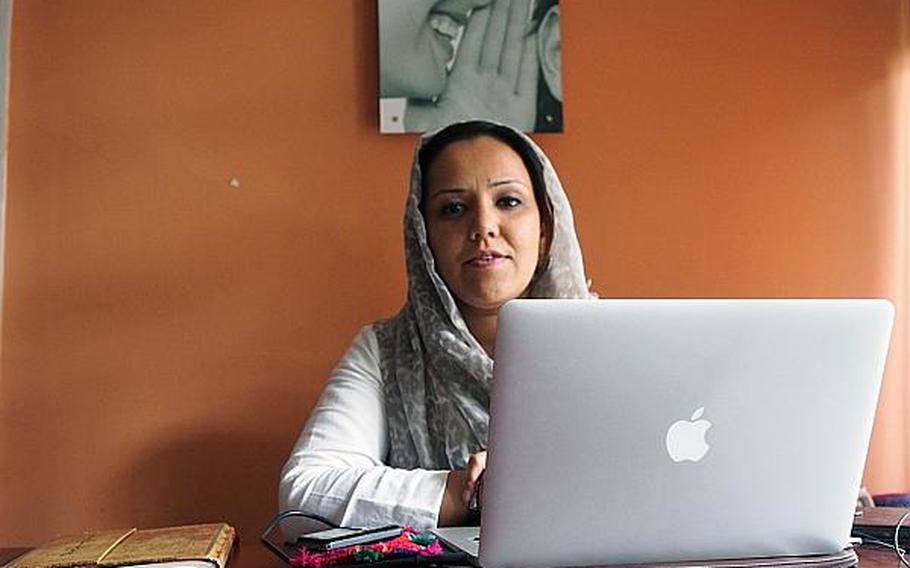 Buy Photo
Mahmoda Sonia Eqbal, the chairwoman of the Afghan youth political movement. The group says it is trying to change Afghanistan's corrupt political system not through revolution, but by mobilizing young voters. (Heath Druzin/Stars and Stripes)

KABUL — In a country with one of the world’s youngest populations, politics are still dominated by an old guard of aging traditionalists, many of whom have been in power for decades.

Now, a group of activists and former insiders is trying to shake up the system by tapping into the largely ignored demographic of young, voting-age Afghans, who could be a political force if they were to turn out in large numbers for the presidential election scheduled for April.

Because this is a place where patronage systems are strong and scores are often settled with violence, it’s a potentially dangerous, arduous battle for the nascent political movement.

“We want to create a voice for our generation,” said Waheed Omer, 35, a former spokesman for Afghan President Hamid Karzai, who co-founded the youth political movement known as 1400.

The group was formed in 2011 as a meeting of like-minded, highly educated Afghans in their 20s and 30s, who wanted to find ways to change a political system they saw as corrupt, ineffective and too deeply rooted in the past. Since then it has blossomed into a political movement with about 150 core members and a plan to become a nationwide political party by the year 2020, or 1400 on the Persian Calendar, hence the group’s name.

Though they are critical of the government, members of 1400 are careful to say they want to fix the system from the inside, not start a revolution.

“This government, this system, despite all it’s failure, is our only option,” Omer said. “We can reform the system, we are not interested in toppling anything.”

Still, they draw a red line when it comes to funding: no money from the Afghan government or foreigners, only membership fees.

And despite working within the system, group members do not shy away from public criticism of the current government, especially the way politicians have pandered to an ethnic base, even though it deepens sectarian divisions in the country.

“We are sick and tired of our diversity being our weakness and we don’t want that exploited anymore,” said Shaharzad Akbar, 26, a member of 1400’s central council.

Civic youth activism has played a major role in recent decades in the overthrow or reform of governments in Eastern Europe, South Africa, Indonesia and most recently Egypt.

Afghanistan desperately needs new leaders, and movements like 1400 are an encouraging sign, said Shahla Fareed, a professor of political science and law at Kabul University.

“There is an urgent need for the youth and educated people to get together and bring a change to the political picture of Afghanistan because, currently, most of our political leaders are those who were involved in the politics of the last three decades and we know what we have gotten from them: they have failed from the beginning,” she said.

Timor Shah Ishaqzai, Afghanistan’s deputy minister for youth affairs, praised 1400 and other youth groups for their political engagement, but warned of infiltration by both Afghan political insiders and “foreign agents,” a common swipe at Pakistan’s and Iran’s secret services.

“All the youth political movements have to be very careful,” Ishaqzai said.

One of 1400’s greatest strengths could also make it difficult for it to gain broad support outside of Kabul: the core members of 1400 are among the priviledged as far as education, with many holding graduate degrees from prestigious Western universities as well as experience in international politics and business. So in a country where much of the population is from rural villages with conservative values, gaining trust won’t be easy.

In order to connect with Afghans in remote parts of the country, several members of 1400 visited Farah province, a largely rural region in the far west of the country, in April just after a devastating Taliban attack left more than 50 people dead at a courthouse. They spoke to families of the victims and gave blood at a local hospital as part of a grass-roots effort across the country to broaden their appeal.

“When these types of incidents happen, [Afghan politicians] sit in their comfortable houses … in Kabul and convey a message of condolence, and we think it’s not enough,” Omer said. “We don’t want to be a group of Western-educated Afghans who just stay in Kabul.”

While the group’s leadership espouses keeping with the values of the broader Afghan population, it’s clear that their vision for the country may be more socially liberal than that of many conservative, rural Afghans. When asked about potential peace talks with the Taliban, members of 1400 were skeptical.

“We are not willing to bring you (the Taliban) in at the cost of compromising our constitution, our women’s rights, our democratic procedures and institutions,” Akbar said. “A lot of resources are wasted on peace talks with no tangible results.”

Another big challenge for the group will be to convince other educated, politically-minded young Afghans to stay in the country. This group, which 1400 is relying on for support, has been draining from the country as the 12-year-old war drags on and employment opportunities remain stagnant.

For this reason, members of the group are firm when it comes to seeking asylum abroad.

“You will not see anyone from 1400 flee Afghanistan,” Omer said. “If they do, we will disown them.”

For 1400 chairwoman Mahmoda Sonia Eqbal, who has degrees from Juniata College in Pennsylvania and York University in the United Kingdom, staying in Afghanistan is also about showing gratitude for her opportunities.

But staying in Afghanistan to challenge a ruling class steeped in war and Machiavellian politics will not only be challenging, but very risky, said Fareed, the political science professor.

“They have a tough job ahead because they are going to face those whose hands are stained with the blood of the nation, and the life of a young man or woman is nothing for them.”